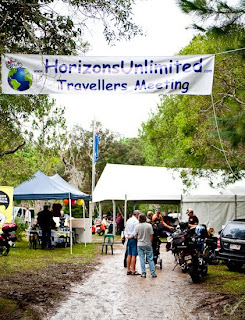 Despite the rain and the mud, a moment before Glen straddled the postie and I leaped on the back. Racing through the mud puddles and soggy areas of the campsite, I held my legs out of the mud spray zone calling out to all the happy campers ’10 minutes to curtains! See you over there’ 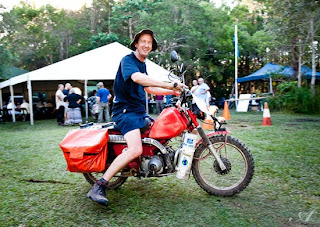 The seventh Australian Horizon Meeting kicked off at midday on Saturday the 23rd of April with the Red Bull girls handing out samples to everyone on site. Guy welcomed everyone to the meeting and laid down the ground rules… ‘Do not turn the generator off! – it runs the water that feeds the toilets!’ I think he was still a bit upset about having shit up to hie elbows in the early hours of the morning! Thanks Guy! I’m surprised you didn’t shake my tent! 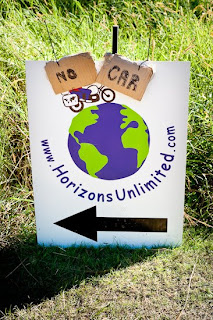 We were extremely lucky to have so many presenters step up to the microphone. We had a huge range of countries spoken about. Russia, Mongolia, Middle East, South East Asia, North America, Central America, and South America. The only continent missing was Africa! Some spoke of their second time around and some spoke about the different types of bikes to take. One spoke until the early hours of the morning….
Errol Goodenough, kicked off the long list of presenters with a topic of ‘Tim Hortens-Maccas-Taco’s & other atrocities’ he kept everyone stuck to their seats. At intermission, Guy shook the crowd up by announcing we were going to do our first draw from the raffle. This caused a tidal wave of people for the registration tent asking for tickets! 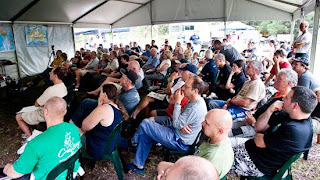 Dennis Barber re-grouped everyone and chatted to people about turning his dollars into dust. I think we all know how that feels! Ann Drew stood up and spoke about their travels through Russia. Haydn and Dianne had a great digital presentation showing their trip from Jordan to Nepal. They kindly offered a copy of their DVD presentation up for sale, with all proceeds going towards Camp Quality. 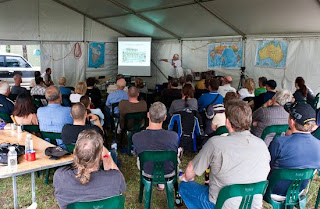 Richard Winters followed in last, talking about his trip through the America’s. His talk went on through out the rest of the night until the early hours of the morning. I heard he was still answering questions at 3 am!

To match the weather we fired up Sunday with a stove and mattress display – were everyone brought out their best, latest greatest, oldest, self-built stoves. Some roared into life, mine set the table on fire and some didn’t start at all! I took a quick moment to make myself pretty for the day, standing under the hot shower I heard my name been called out to come and present my ‘Hilton in a small package’ – my air mattress! Luckily, for me Guy stepped in to keep the show on the road! 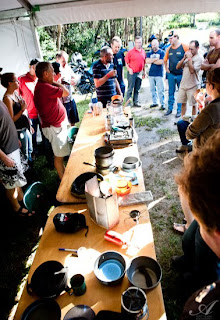 GPS and other devices pulled a huge crowd, as we generally discussed the different types and what they can do for you. Everyone was able to add in their advice and experiences, while some questioned them and others looked baffled. What did happen to a good compass?? Cheryl stood up and spoke about her and David’s Trip titles a round the world trip and where once isn’t enough! They didn’t have a slide but Cheryl, managed to hold everyone attention by describing the journey in such great detail we could all visualise every moment.

Glen and Leeann pull all their personals out on display for all of us to examine. I think I’m the queen of packing light, but even I learnt something from Glen. I had never thought of using bread tags for pegs! Thanks Glen. 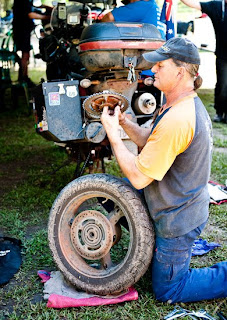 This demonstration was closely followed by Rob, our host from Tyres4Bikes who show us all how to change a rear tyre on a Richards bike. Everyone huddled in close, taking notes on every thing that spilled from the guru’s mouth. 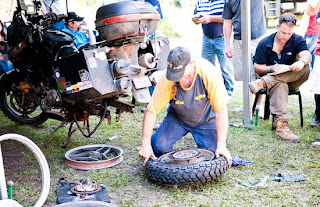 After a long morning, we broke for lunch, after lunch we had all sorts of bikes lined up from a postie to a BMW. Matz gave a great presentation of what type of bike for what kind of trip and everything to think about for preparing for a trip. This is where it got a bit tricky for us, two presenters hadn’t shown up so we has to re-arrange our schedule and pull forward Ken Taylor. Ken spoke about his trip from Australia to Ireland on a $500 Honda Transalp. 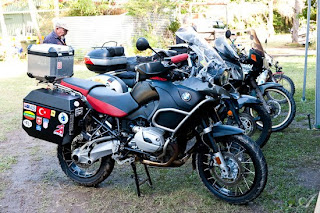 Guy came up with a plan of having an experts panel after dinner followed by secrete woman’s and secrete mans things.

I was asked to be sit down in line with all the experts ranging from short trips to Iron Butt contenders! I hate talking in public, but after I asked, I made sure I drank a few beers! It was interesting hearing the different people’s opinions and how they got their money to be able to travel, their favourite country and why and so on….

We broke the question and answers session to move into the secrete zone where all the woman huddled in the shed and the men spied through the gaps in the Marquee walls. The woman asked each other questions from (***deleted as we can not control which sex reads it.***). After much bantering from the men, we dissemble our tight group and joined everyone else. 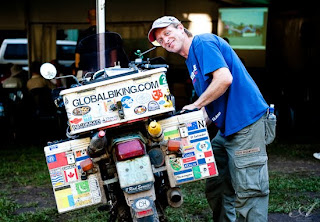 Thommo tested our tired minds and probably one too many beers as he managed to get a 15 mm long cricket trying to make a home in his ear. The only sober person in the group took him to Noosa Hospital. I would like to thank everyone who helped out, especially to the person who drove him to the hospital and to Guy and Sam who took him home with them and arranged for him to see a doctor in Brisbane the following day.

Crawling into my tent late Sunday night, I was extremely tired but also extremely happy for the people I had meet and talked to over the weekend.
To make this weekend possible I would like to thank the following people who help pull this whole event together. Sam, Mark, Helen, Lyn, Richard, Daniele, Shane, Graig, Oscar, Paul, Anthony, and Alana for chasing their tasks and getting the information back to me. Thanks to Guy and Glen help pull together all the information from everyone and made the decisions. Also during the weekend, we had many people put their hands up to help through out the meeting. Besides our original volunteers Dorothy, Thommo and Leeanne were on my beck and call.

A huge thanks to the following companies who had a trade display and or supported our Camp Quality Charity by providing a prizes for our raffle. City Hire, Tyres4bikes, ARB 4×4,

For more information on Horizons Unlimted please visit their website .
Thank you Andrej Kadacik for the photographics I have posted above. Please visit his his webiste – Artisan Photography