My head is slumped in my sweaty hands while I leaning against the dust door of a pick up truck. Peering through the windscreen crusted in months of built up dust. My backside was sticking to the vinyl seats as I was still clothed in my AXO motorcycle pants and boots. In the rear vision mirror, i could see my bike sat securely on the flat deck, but I still wondered how I managed to get in this position.  The day before, I slowly packing up my tent, trying to charge all my electronic gadgets. Trusting the other camp goers by leaving them unattended in the communal kitchen. Over the past few days, I had become good friends with a few of the long term campers around the camping ground and had been offered jobs left right and centre. Its funny when you don’t want one, they fly in your direction. I dropped my key off at the front desk and said goodbye to my fallow campers. 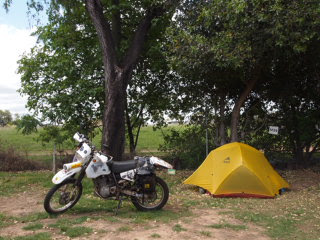 Driving to the motorcycle shop, i had a strange feeling my parts hadn’t arrive. I pulled up out the front of the shop, dressed in my normal pants and AXO boot. I un-zipped my jacket and left them on the seat. Entering the cool air conditioned environment, I say good morning to Rob (the owner) and head over to the parts girl.  She had great news for me, they had arrived! Hayden opened the tall steel gates around the back of the shop, I pushed it inside into the cool dark workshop. Once again, I strip the carburettor off the bike, Hayden dropping off tools when he thought I needed them. I cleaned the carburettor with special cleaner, ensuring i get into all the holes and dried it off with the air gun. 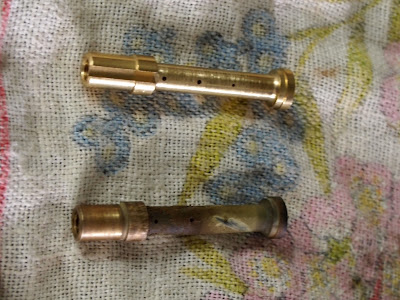 The new and the old nossel 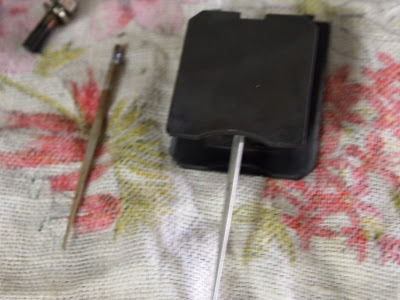 The new and old needle

Installing the new needle and nozzle, i put the carburettor back together setting it all to the book. The bike still ran lumpy, I mention this to Hayden, and he suggested with check the tappets, so off came the tank, seat and tappet covers. They did sit really loose, which I was surprised about as we had set them before I left. Hayden tightened them to the book and sent my on my way. I was still not entirely happy, but the bike ran, no fuel pouring out. I just thought to my self, ill chat to someone else along the way about the rattly engine.

I planned to spend the night in the free camp site under the bridge at one end of Emerald. As soon as I rode up and parked under the bridge, I was accosted by a retire on a mission to build a stone henge just out of Emerald. He was inspired after he had read a book about an Australian explorer and visited the stone henge built just north of Wellington in New Zealand. I was relieved when I saw another motorcyclist arrive into the car park and even more so when he headed over in my direction. After much yakking about bikes, set up and favourite countries, Shaun invited me back to a fruit farm where he was staying in a ‘donga’. Ive never been in or seen a donga before, so this was an new experience for me.

Dongas, are generally made out of Aluminum sandwich panels which consist of a two pieces of aluminum sandwich a piece of polyurethane  in the middle as the insulation. They generally only have one window and one door. Shaun’s Donga contained a bunk bed, a wardrobe and a desk, simple but nice. The kitchen was another matter. It was laid out in a haphazard way with a car in the centre. Cobwebs filled every corner, spiders emerging from them. The stove top was an old BBQ, we dragged out to cook our dinner on top of. 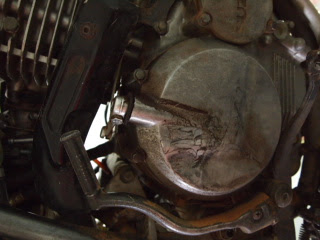 I needed to install a new seal in the clutch release 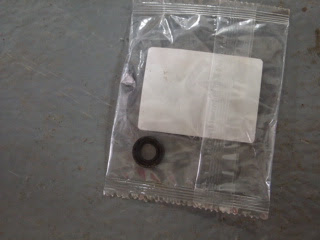 In the morning, I packed my bags back up and walked back to the kitchen to have breakfast. As soon as I turned I heard a thump, and I looked back to find my bike on its side. Shaun, laughing his head of at me, came over to give me a hand as i was feeling week so early in the morning, thinking to myself that this is not a good start to the day! Soon after breakfast, I took off as I wanted to get back on track to make the last ferry of October with a goal to arrived into Longreach by the end of that day. 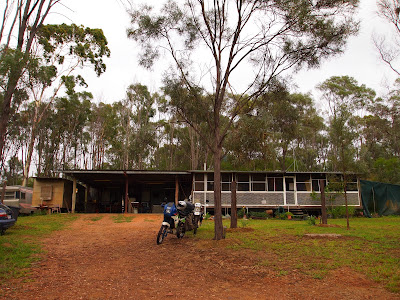 My bike wasn’t feeling right, I wasn’t really happy as it was really sluggish at the top end. I really need to talk to someone in Longreach and get it sorted out once and for all. So I kept on pushing it along at a slower ambling speed, that’s when a black and white bird flew up from my front when and slammed into my chest. I was not having a good day. 150km out of Emerald and only 10km short of my first fuel stop, the bike made a funny noise and instantly turned off. My left hand leaped onto the clutch and I glided off the road. Jumping off the bike, I looked down at the engine wondering what went wrong. I was flabbergasted at the sight of oil that had manage to sprayed out of every bolt bolt hole. This can not be good. I tried to attempt to push the piston through, but it was holding the kick leaver hard. My bike was serious sick. It had to get shipped out.

I heard the rumble of a car coming and waved out to them. The driver in the red hilux, waved back with a huge smile. The guy in the pick up truck behind him, slammed on his breaks and pulled off in to the dirt shoulder, just in front of my broken bike. He puts his hand through the window and opens the car door from the outside. As he got out the door, I was faced with a guy with long curly hair cut in a mullet fashion. He wore glasses, but one lens was covered up by a swirl of red stars. ‘Have you broken down’ he asks, ‘ yeah – i think I’ve blown it up – I’m just wondering what to do, i could either head back to Emerald or go to the bike shops in Longreach’ ‘Well I’m heading to Longreach and there are three bike shops there’ That’s one more than Emerald I thought to myself. ‘Can my bike and catch a ride with you to Longreach?’ ‘Yeah if we can get it on the back’. 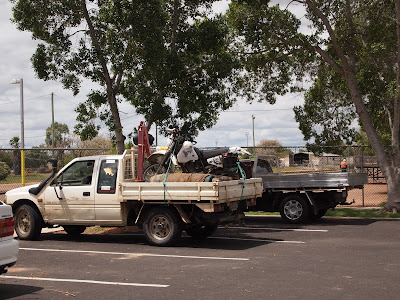 A sad and sorry sight!