Rising at a more reasonable hour in the morning, we slowly pack our gear up. This was no easy task as we had managed to scatter all our gear all around us. While waiting for the dew to dry off our tents, Maciek with one hand firmly around a steaming cup of coffee he removed my old box stop light and wired up a new LED strip lights (that Peter had given to me the day before) as a constant tail light. 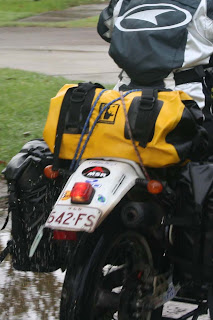 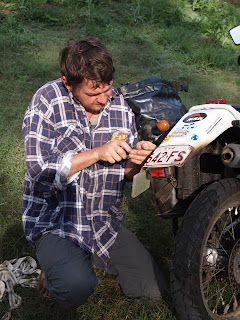 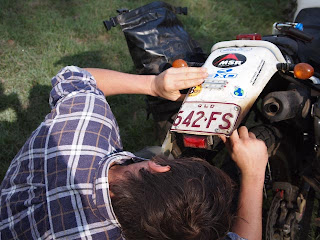 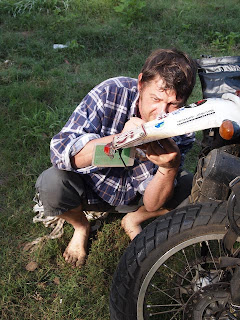 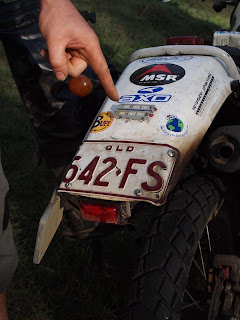 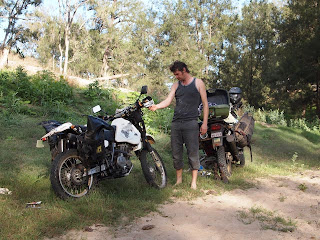 Eventually everything was dry enough and firmly back in its home on the back of the bike. We head north to a town called Rolleston, where once again I will need gas. At this point we had to make a decision which direction to go in. I stomped back inside with the map and asked the young over weight girl dressed in a tight singlet with dyed blonde hair, what she knew about the road to Blackwater. ‘I wouldn’t do it, it’s a terrible road. Cars turn upside down’. Taken back by the rude manner of this girl I defensively relied ‘Were on dirt bikes not Harleys!’ ‘Take my warning as you like, but still I wouldn’t do it’ ‘Were is the Police station, I might just ask them’ She explains where they are, but by the time she had finished talking I had decided it was worth the risk.

After, we ate our apples, went to the toilet and Maciek had a cigarette, it was time to leave. The unruly girl pops outside for a smoke, ‘so what have you decided?’ ‘We are going to give it a try’ I replied. Her tune changes and tells us that she loves getting out of this town to takes the road to another small town called Comet for the great pub that’s its known for. ‘So you take the same road, we are about to take?’ ‘Sure thing we always take it!’ Taking in a huge drag on her ciggy, I’m pretty sure she just completely forgotten about the conversation we just had a few minutes ago.

Turning off the main road we hit the development road to Blackwater. I am feeling completely at ease with the bike and its handling on the wide smooth dirt highway. You almost couldn’t ask for anything more boring! I was expecting huge pot holes, mud, swamp and massive rivers. Highly disappointed, Maciek passes me and points backwards. I have no Idea what he’s pointing at, so I just potter along at 80 kilometres with full tire pressure.

Maciek disappears into the distance as I potter along, feeling the front tire slip out every now and then. With a quick pull of the throttle I keep the bike in control. I spot him parked just on the other side of an intersection, waiting for me. I pull over and turn my thumping engine off. ‘I thought we should wait and let this road train pass us’. ‘What road train?’ looking behind me, I can just make out the front of the truck with huge billowing clouds behind. ‘Oh that one… that’s what you were pointing at!’ As the truck approaches, it turns off heading towards Comet. Laughing, I kick the bike over and pull back onto the road.
We reach Blackwater, glad we didn’t listen to the girl in the last town and actually took the amazing back road. With Maciek well trained to know I will be needing more gas, he pulls into a service station and I fill my hungry tank. Inside, I pay for my gas and ask where a nice pub is for a good lunch. Spinning on her feet to get her bearings, she tells us about the miners club down the road. Despite her best efforts, I still turn down a street too soon and have to find our own way there.

Sinking into the soft couches downing a schooner of beer, we order our meals and spend the next ten minutes in silence, answering text messages. Eventually we look up and discuss where we would like to go from here. First option was the tiny pub in Comet that the lady suggested. Second option was to carry on to the Blackdown Tableland National Park.
I jumped up and took my map over to the bar staff, ‘I was just wondering if you guys had been to the Blackdown Tablelands?’ A girl of similar age with a trendy short haircut relied ‘I’m sorry, I’ve only just moved here.’ Another younger girl, who was trying to have her lunch break steps up to the counter, ‘I’ve been there, it’s amazing and since we have had some rain recently the waterfall will be flowing’.
After a quick visit to the supermarket, we headed east down the main road and turned off to the National park, just after a small town called Bluff. Following the narrow paved road up the hill, you could feel the temperature drop to a comfortable environment. Every so often, the trees gave way to the most amazing view across the plains below. Excited, by the views, the smells and the road I felt as if I was in heaven.

Reaching the main gate into the park, we attempt to call the camping grounds booking office, through a metal box attached to the information board. After two attempts and hearing the terms and conditions before it cut out, I gave up. We followed the well looked after dirt road that was covered in ‘pea gravel’ eight kilometres down to the end, just at the dusk was setting in. At the end of the road, I came to the camping grounds, with bark tracks and surrounded in dense trees, the camping spots were clearly marked out, with wooden stumps and fire pits. As the light fell we pitched our tents and started a fire all with a cold beer in our hands. 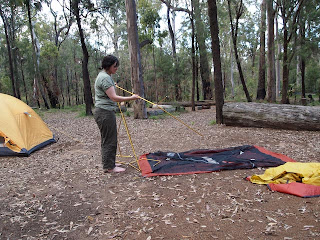 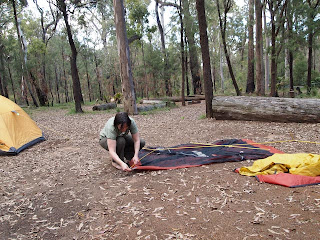 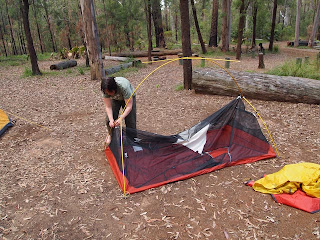 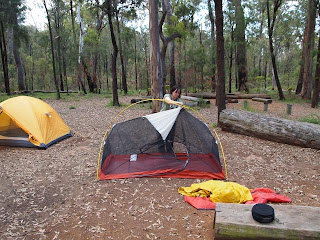 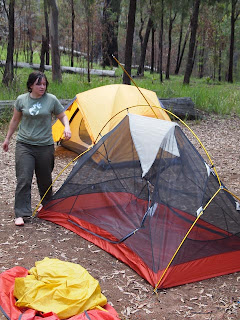 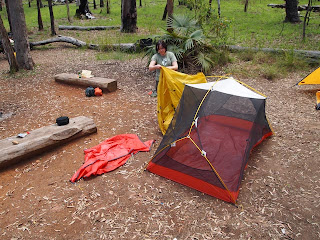 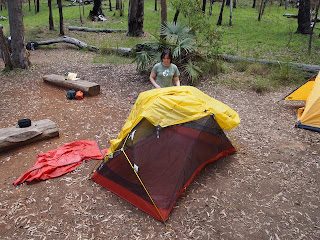 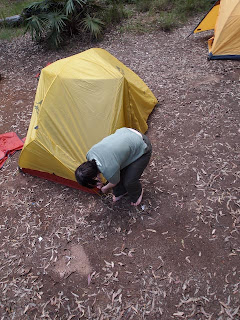 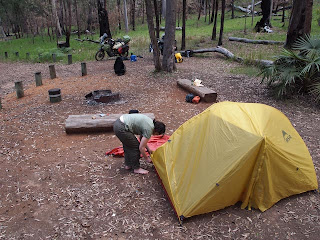 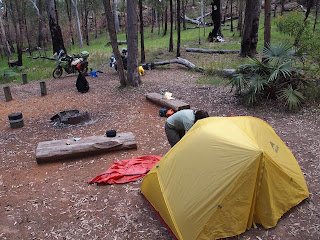 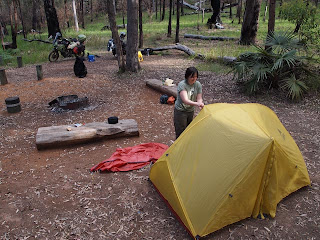 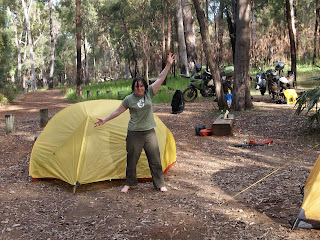 And thats how I set up my tent! 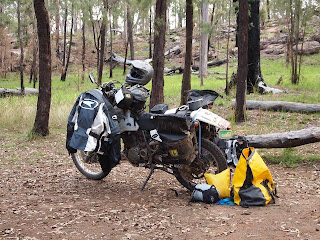 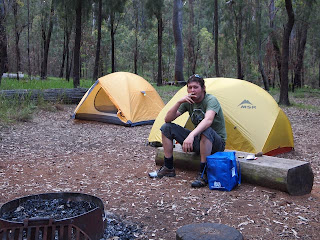 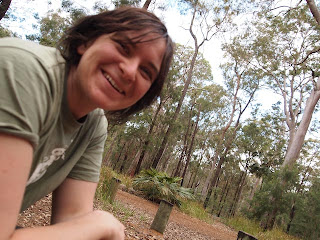