I was starving by the time I had reached Katherine, I left Daly Waters at 8am and hadn’t stop to have breakfast or lunch only for fuel. I entered into the cool supermarket, hoping my pants would dry out while I was wondering around. One should never go shopping when they are starving, by the time I walked back out into the humid heat, I had two overloaded bags of groceries. I made a small dent in the bag, while balancing on the kerb next to my bike and gouging on my lunch and studying the Kakadu National Park map. I had decided to spend about four or five days in the park, hoping to see everything at Peter had told me about. After cramming that many days worth of food into my top roll bag, I hit the road once again bound for Kakadu. 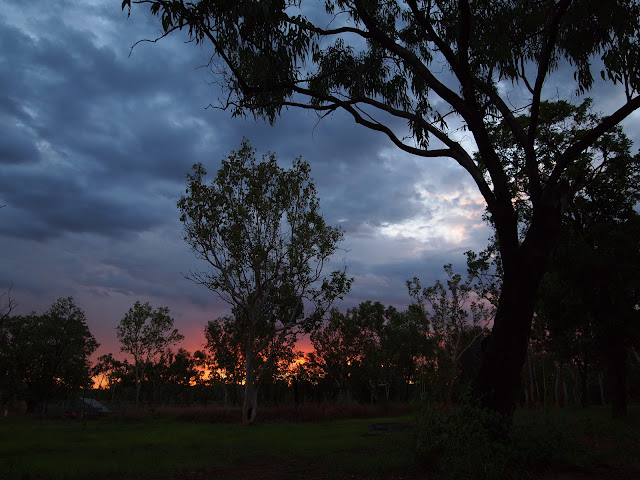 With the sun beating down, I hit the turn off to Gumlum it was going to be a 40 kilometer ride off road, my day couldn’t end much better than this. Not long after I hit the dust, the corrugation started combined with my lack of food and water and the extreme heat quickly made me tired and grumpy. Ive never see corrugation this size, no matter what speed I did, i couldn’t help feel like i was shaking my bike to pieces. Not to mention my fork seals had been leaking for some time now (Something I needed to fix but wasn’t too concerned until I got to Darwin). The camp site is only 40 kilometers surely my bike can handle it, thinking to myself when had i become over sensitive to my motorcycle and started treating it like a fragile baby? 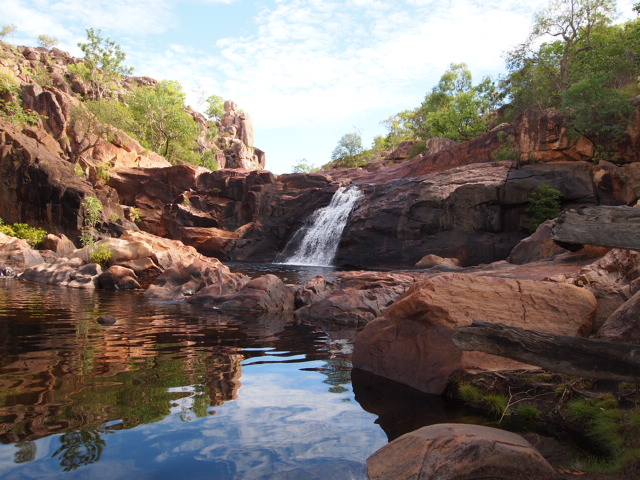 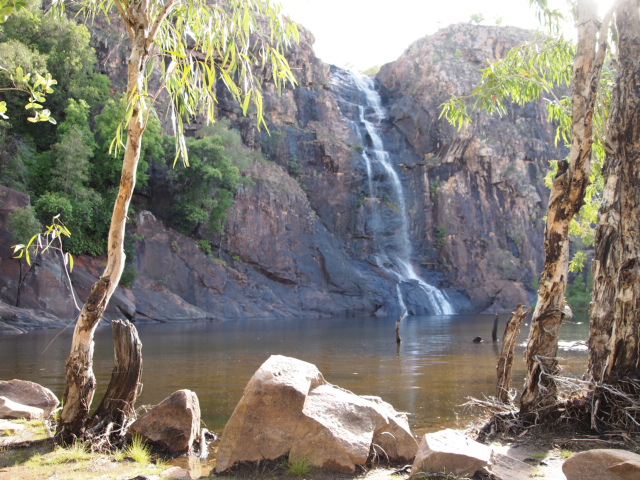 The camp site was beautiful, there were only five other campers compared to the 300 they had during the peek season. Pitching my MSR tent just in time for me to laid down in it and listen to the monsoon rain hit my tent and roll off the fly. I was proud to discover the tent stands up to the Australian tropical down pour. When it finally eased i made my way out of the tent to see the sun started setting behind the tress. In the dim orange light I cooked my dinner on my MSR petrol cooker. This was the life, simple, quiet and totally real.

Before the sun had time to rise into the sky and heat the land up, I stormed up the steep rough stony track to get a glimpse of the only water hole you can swim at in the whole entire park. I was stunned at the  beauty that surrounded me. The water just looked like it dropped off the edge after tumbling down a series of waterfalls. I meandered around the rocks taking photos feeling like i was becoming more familiar with my camera. I felt the urge to jump into the cool water, but my fear of rivers came back to haunt me as I was the only one stomping around up there and who knew if a crocodile had move in over night! I sure wasn’t going to be its breakfast! 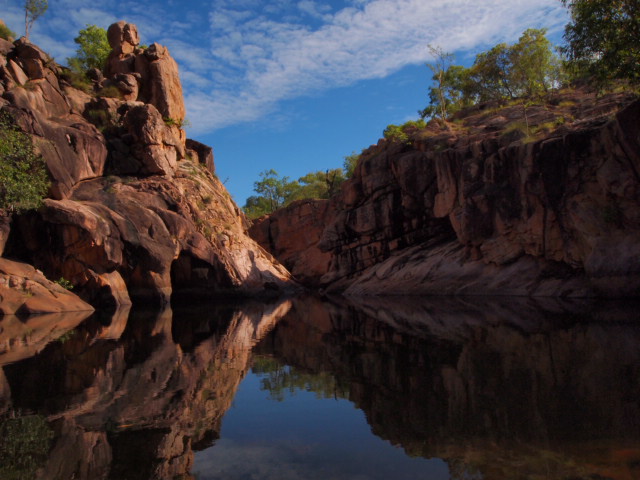 I hit the shitty road heading for my next camp only 100 kilometers up the road. From there I would be able to do a few day trips around the place. I was really looking forward to setting up the tent for a few days and potter around like normal holiday. Only this didn’t happen as 30 kilometers back on the tar seal, my bike started to cough and drop speed, thinking it was the fuel I reach down to switch it over to reserve before it died on me. No this didn’t work as it stalled and I rolled to a stop on a blind corner with no nice shoulder in the shade. Here I was, stuck on the side of the road in the heat once again going through what was becoming completely normal – checking my fuel flow, spark, and air filter. All ok and in great condition. I start the bike, it sits there and idols but not smoothly. As soon as I touch the throttle I found the bike would quickly stall. That to me must mean that there is something stuck in my carburetor, I must have been given really dirty fuel at the last stop, but even this didn’t make sense. By this time, I had stripped my motorcycle gear off, I was sitting on my jacket pondering on the idea of taking my carburetor apart on that corner or to try and hitch a ride to a camp site or to the service station 40 kilometers away. Watching a couple of cars passing, a four wheel drive towing a camper trailer passes, giving me the thumbs up.

I shrug to say no, but you can not help me. Another small car passes me at speed, then I hear the 4×4 had turned around and coming back towards me! I stood up as he asked if I needed a hand. ‘Do you know anything about carburetors?’ ‘A bit, whats the problem?’ I explained the symptoms and showed him, what happens when it starts. Pulling out the throttle, he discovered it would allow enough fuel through the carburetor to allow the bike to travel along and he even gave it a test ride. Simon, offered to help me blow the particle out with his compressor at the next camp site. I agreed to this idea, knowing it was my only chance. Bend over, one hand holding the choke out and the other on the throttle. I could feel cramp setting in. I needed another way to do this, its only been 10 kilometers and I was traveling at 60 kilometers per hour. This was going to be a long afternoon. That when Simon, who had been following me at my slow pace, past me and pulls over. He leaps out from the front seat. ‘I have it!’ he said excitedly, we can use two zip ties together to make a collar, that way you do not have to be so bent over’ I could almost kiss him! I was back on the road, still traveling 60 km/h but I was sitting normally. The camp site finally appeared, I was so glad to get there with no other mishaps. I found a nice site, under massive trees giving me plenty of shade for the rest of the afternoon, and a concrete picnic table which will soon be my workbench. trying to let my engine cool down, before I pull my carburetor apart again, I bide my time by setting up my tent. A few minutes later when I couldn’t hold out any longer, I stripped my seat and tank from my bike. Disconnected the throttle cables and pulled the trouble-some beast from its home. 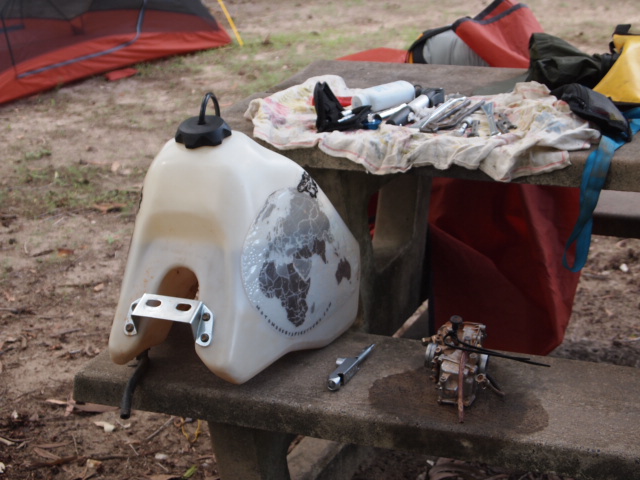 Pulling on the throttle spring, which in turn lifted the slide up, I instantly saw what the problem was. I placed the carburetor down on the table and for a second laid my head down in my hands. I couldn’t believe it, the needle had disappeared completely. Wondering over to Simon’s camp site, with the carburetor wrapped up in my tool rag. As i handed it to him I said, ‘I found the problem!’ He takes one look at it, and laughs. We both are bewildered. I replaced that needle in Emerald, that was roughly 2000 kilometers ago. Pulling the carburetor further apart, i found the needle had dropped into the nossle and the clips were still in place. I re-clipped it on its only clip setting that didn’t fall off and re-installed everything. I now really had to get to Darwin a lot earlier and order a new carburetor or at least a new slide. 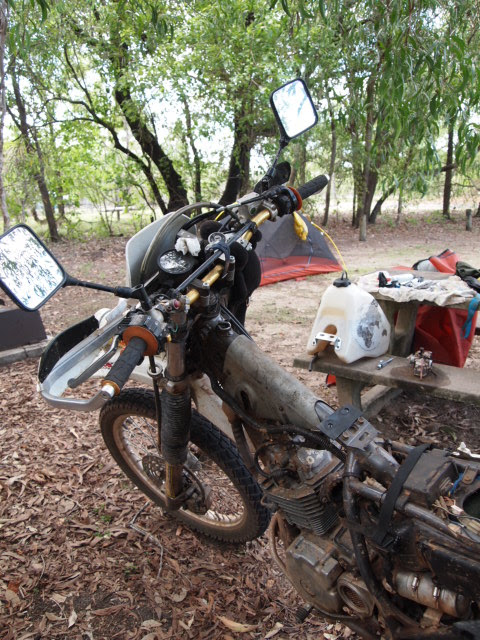 It was 300 kilometers to Darwin, I could feel my bike surge through the extra rich fuel mixture, my confidence rebuilt and I slowly increased my speed to 80 km/h. Early afternoon, I arrived into Darwin and ducked into a motorcycle shop just as a huge down pour started. I explained my issue and past problems, they quickly offered my a job in the workshop. Flattered, i turned them down and said, the more i know the less I know, I don’t think i could work in your shop yet. I could have ordered just a new slide, but I thought to myself that I’m only fixing it with a band aid, I would rather get a new one and know I’ve done the best I can.