Longreach was 14 kilometers behind me when the bike just putted out and once again, I was left to hold the clutch in and glide to a stop. There was no where off the road to go. Kicking the side stand down hearing it touch the warming tar seal. Rage was burning inside, as I tried to keep a level head surly, this can not be happening again and only 14 kilometers from my start. I worked through my usual check, fuel – yip it was on. Choke off- Yip… I then thought well i might as well kick it over and give it a try. It burst into life, and I could carry on. I didn’t understand, I rode around town last night for more than the 14 kilometers it allowed me. Then I remembered, we added a hose to my fuel tank cap, to stop the petrol from splashing out and we also added a one way valve that would let air in but stop the gas from coming out. I reached down and ripped out the offending item, rapping it around my handle bars to fix up and my next fuel stop.

Today I was heading for Mt Isa, or close by that was around 600 kilometers away, but I felt if I took my time I would get there late in the afternoon. It felt good to be back on the bike, it felt good underneath me, humming along just like it should do despite my rattly carburettor. 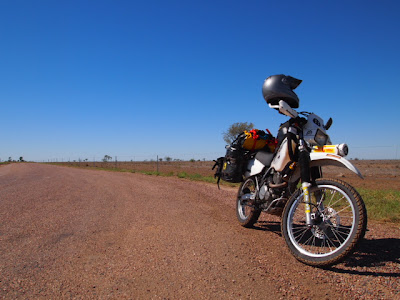 The kilometers fell away with the tar seal rushing past my spinning wheels. I was amazed to see the green grass fall behind and change to yellow as i moved closer to the desert. I found myself been excited by seeing large lizards and dingos with pups in tow trying to cross the road. Emus in the distance, staying well clear of the unknown mechanical beasts that past them by at 130 kilometers per hour.

Early afternoon, I saw a shinny motorcycle quickly pulling up behind me. I move over to allow him to pass with ease at the speeds hes doing. As he passes he slows down and matches my speed and takes a good look at me as I stare back, I could help think of the ending in the movie ‘easy rider’. With a wave he takes off, there is a small town 10 kilometers up the road and I hope he is stopping to get fuel as I am.

Pulling up to the fuel pump he walks over to me with the chin of his helmet lid up so i could see most of his face, ‘the power is off so there is no fuel’, looking down at my tank, i know i have another 40 kilometers left in it. ‘How far is the next one?’ ‘Its 70 kilometers, you should have enough’ I shake my head as i know my tank looks large but isn’t really. I jump off my bike and fill the tank up with the 4 litres Ive been carrying with me for the past week. ‘Well, did you want to have a drink when we get there?’ he nods and I take off as I know he travels a lot faster than me. 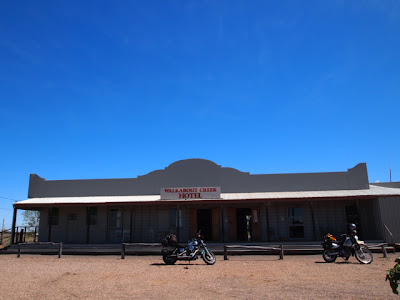 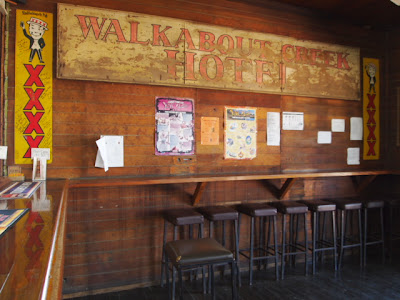 Next to the petrol station at the following village, sat the ‘Walkabout Creek Hotel’. The very bar that was used in the first two scenes in the Crocodile Dundee movies.  Rai and I sat down at the counter and while we talked about our adventures and miss adventures, we let the ice melt in the bottom of our cups. Rai was back in this part of the woods to finish off a journey he started a year or two ago, when he was involved in an motorcycle accident with a road train. He felt like he should jump back on the same bike and go and say thank you to the people who helped him out then finish the journey. We finished out drinks and left the cool bar for the sticky outdoors. Rai, soon pasted me on the highway, an encounter like many probably never to meet again.

Mt Isa, was only a few hundred kilometers away, I knew I could make it before dark. This is where I would have to prepare my bike for the long 260 kilometers on no fuel stations. My tank only holds 180 kilometers of fuel before I have to switch onto reserve. I have no idea how long that last me, as the design of the tank only allows me to use half of it. If i was to tip my bike over on its side it might allow me to obtain more fuel, but this was hard in a fully laden bike in the scorching heat.

I rose early and found the local hardware shop, brought a 5 litre jerry can. I spent the next 30 minutes trying to work out the best way to strap it to my motorcycle. After completing the puzzle to hit the road. With the aim of another long day in the saddle as today I will cross the boarder into the Northern Territory. 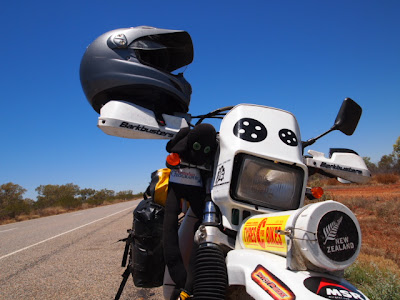 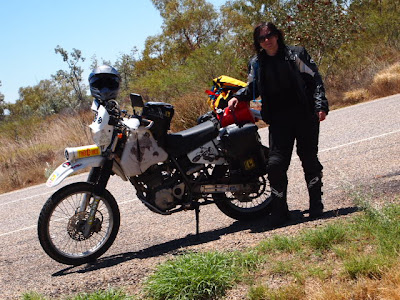 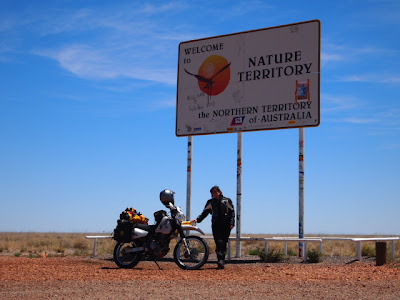 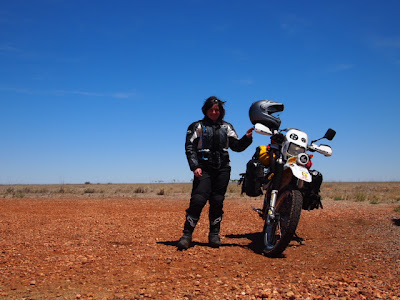 I arrived again late in the afternoon to my next destination – Barkly Homestead, where I pitched my tent and topped up with fuel. As I sat down for a cold beer at the bar, I noticed two guys walk in and also get a tent site. Ill have to talk to them when they come back in or i head out to my tent. When they didn’t show up, i wondered out to their chosen posy next to the picnic table. The older guy Peter was a tour guide for Kakadu National Park, he had just brought a KLR off Akio, who was traveling with him back to the Sunshine Coast in Queensland.I always find it amazing how owning a bike can bring people together and easily become friends.

As the sun rose into the sky, I woke in my tent for yet another day on the long straight roads that pierce through central Australia. Peter had told me to stop in at a small pub on the way up to Darwin called Daly Waters. So that’s exactly what I did. Pulling into the pub, i dismounted my bike, removed what gear I could easily without getting naked. I was really feeling the heat now and had found myself traveling along with just my amour jacket on. I walked into the pub, dizzy with heat and sweat. I stood behind a family asking every question under the sun, come on people im dieing in my motorcycle gear here!!

Eventually I was served, and told where to put my tent up. Within seconds of stopping the bike, my boots and my pants were off and I found my body temperature drop as the wind picked up the little droplets of sweat and took them away. I pitched my tent and headed into the shade of the quirky little pub. 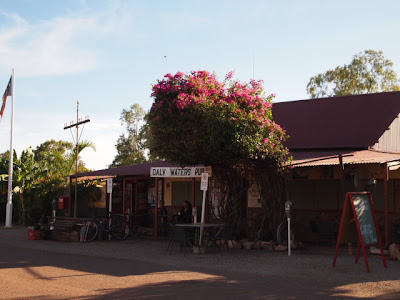 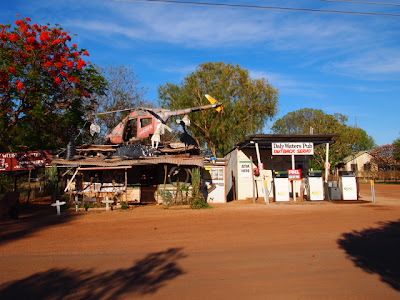 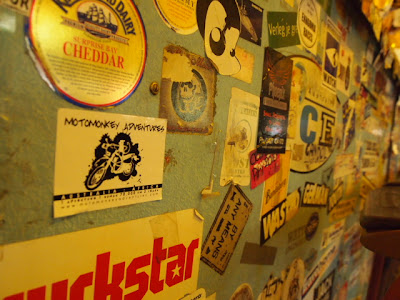 Notice that its near the ‘By Any Means Sticker….

The Daly Waters Pub was filled memorabilia that lines the walls from Irish football jerseys to bras. Wherever you look there is something interesting to read or ponder its origin. I too couldn’t help but add to the eclectic collection with my own Motomonkey Adventures sticker.