Excitement grew outwards, originating from my belly, I ignore the thought it could possibly be nerves. Peering through the plastic oval window of the aero plane down to the sharp green mountains ranges, trying their hardest to touch the wings of the plane, towering well above the raging brown rivers that sat awkwardly at their feet. Suddenly swooping around the capital of East Timor, buildings started to punch out from the land and people started to become animated to eventually individual people with particular features. 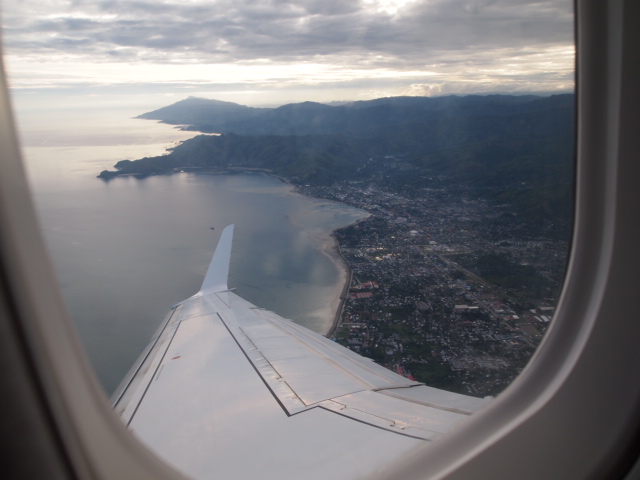 The wheels bounced over the tarmac runway trying to slow down hard, we taxied over towards a single concrete shack near a larger building. Fallow passengers were already lining up for a visa on arrival. In turn I obtain my pretty stamp to add to my passport. Juggling my amour jacket, motorcycle jacket, little green bag, tank bag and my helmet, I grab my panniers off the caracal and headed for the exit.

Its 8am but I am already feeling the hairs on my arms tingle as the sweat starts to bead on my skin. I didn’t have to wait long before I spotted the A3 paper sign with the words ‘Mrs. D M Murdoch’ written in black marker. Piling into the mini van with all my gear I was whisked away hading towards a guest house in the northern suburbs of the city. Sitting back and relaxing, I had time to take in my surroundings and reconnect with Asia once again. The noise, smell, chaos, colours and the dirt all crumbing through all my senses. The van safety deposited me outside a tall concrete fence topped with curls of barb wire. My hand instantly when to my pocket to check if I still had my wallet and passport as I walked through the gates to my new home.

Rita, the guesthouse owner showed me a bed within the darken, air-conditioned dorm room. Frank woke at the sound of our movement and sad hey in a croaky morning voice. I was about to enter ‘Spotlight’ in Darwin when I spotted a bike set up for touring, with out a second thought I waved and entered the building. Not long afterwards, I was greeted by a guy ‘Danielle?’ ‘Yes?”Your shipping your bike to Dili on the next Perkins shipment, aren’t you?’Um, yes’ wondering how did this random guy know me so well ‘ who are you?”I’m Frank, Paul (another person who was meant to make the same shipment) told me about you, I email you today’ ‘Oh – you’re the guy…’ All the pieces of the puzzle fitted and the ‘I must be famous!’ thoughts diminished!

It Friday and I was in Dili, the bikes (Frank and mine) should arrive on Sunday night, but I already know, that not going to happen it was already a day late if not two. Frank had been here since Monday, and had already got to know the ins and outs of this UN city and was hitting boredom. One could quickly work out there were no tourist in Dili, most white people were UN workers running about town in their white trucks with huge UN painted on the side – just like the movies!

The very next day Frank and I caught the once a week ferry to the Island oust north of the city. This ferry took 3 hours to cover 20 kilometers. Once on the Island we hitched a ride to the next town only 7 kilometers away had lunch and walked back to the board before it set sail home to the mainland. 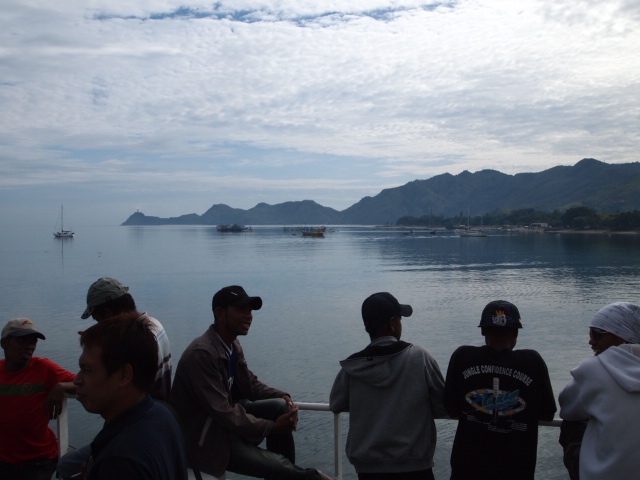 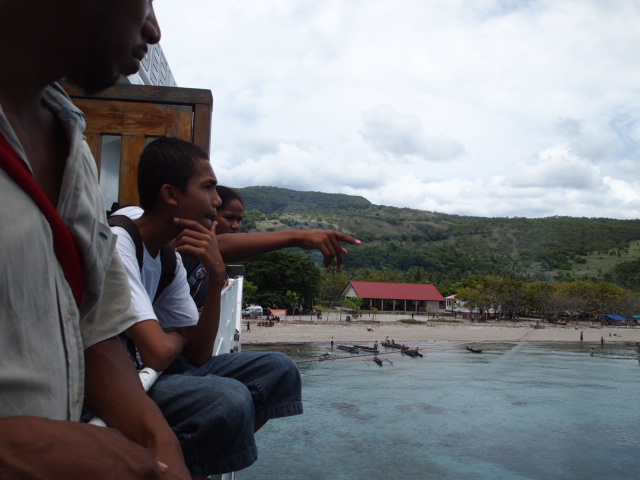 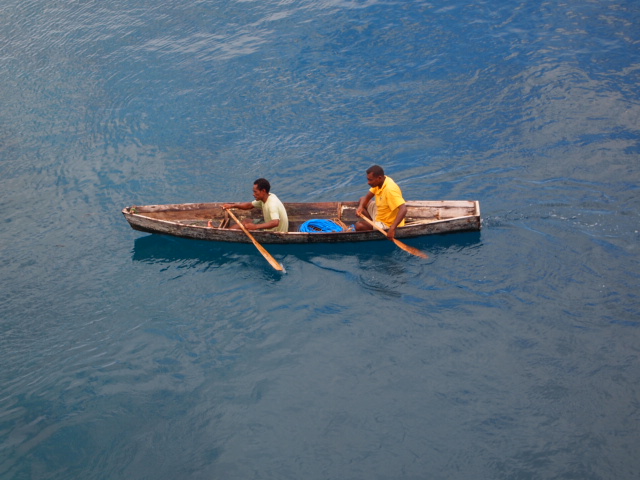 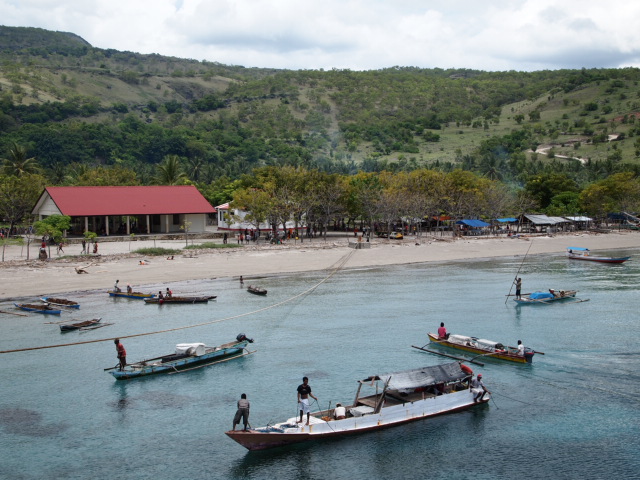 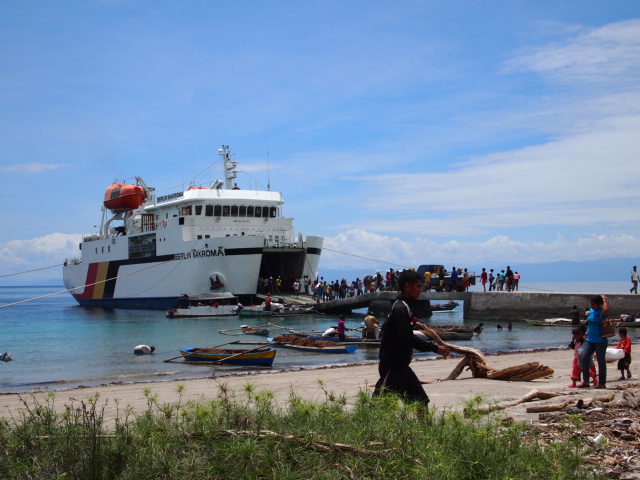 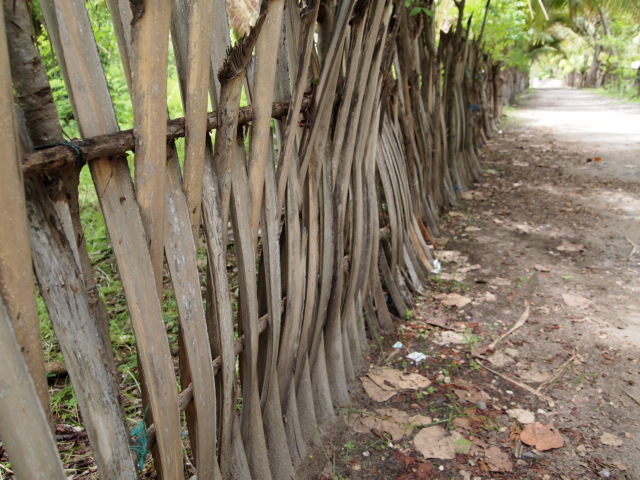 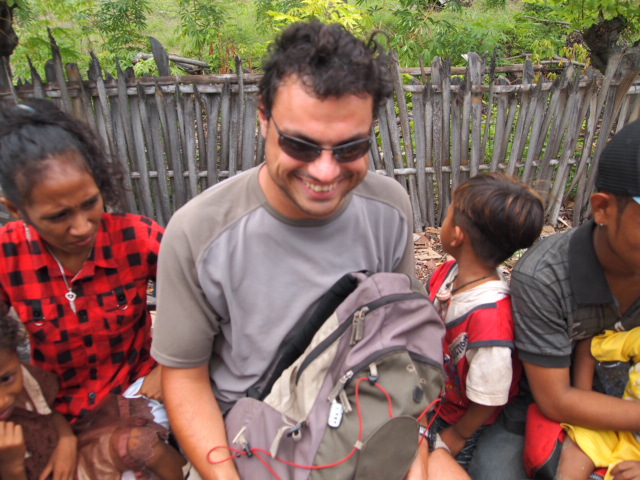 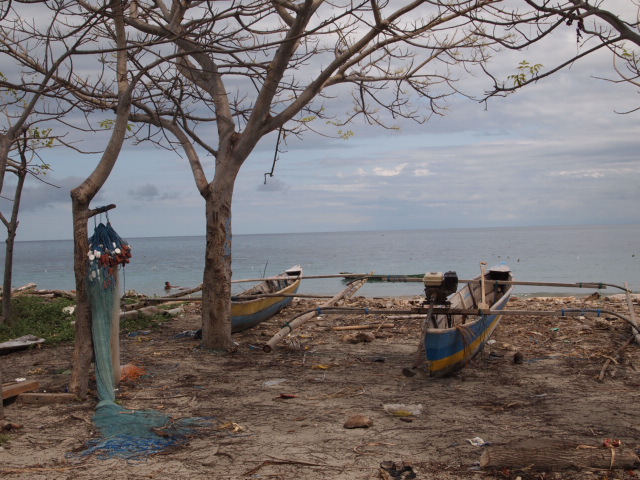 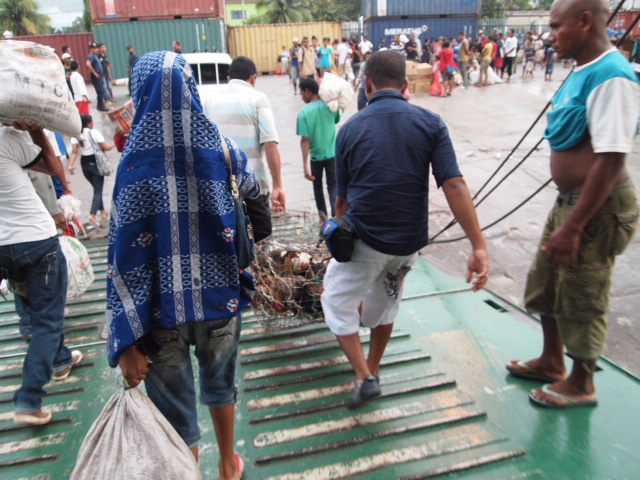 With nothing better to do, all the guests at the guesthouse caught a ride on the back of a beat up Ute to the local speedway, where we watched a motocross competition. We found a nice seat on a concrete ledge in the shade, right in front of the main jump. After a while, I noticed a main in defense uniform, solute someone behind me, tuning I saw no one that stood out. Later that afternoon, we discovered we were sitting right in front of the President of East Timor! 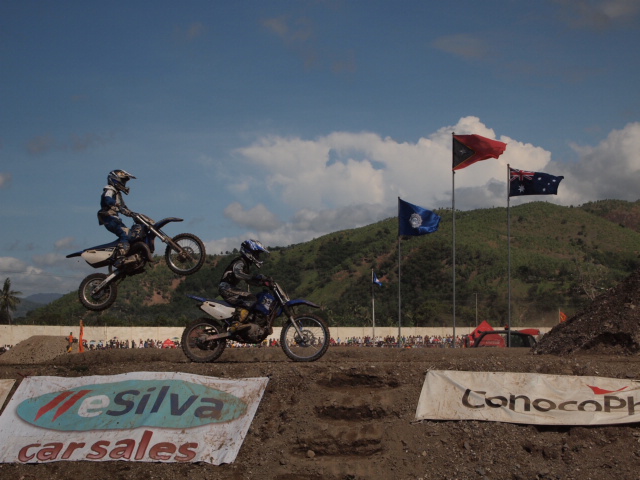 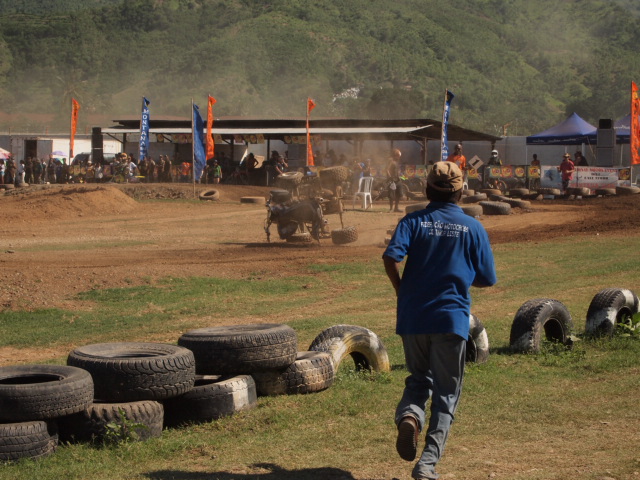 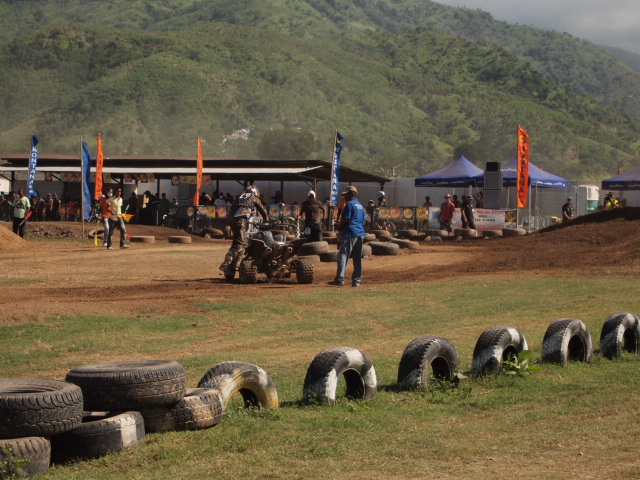 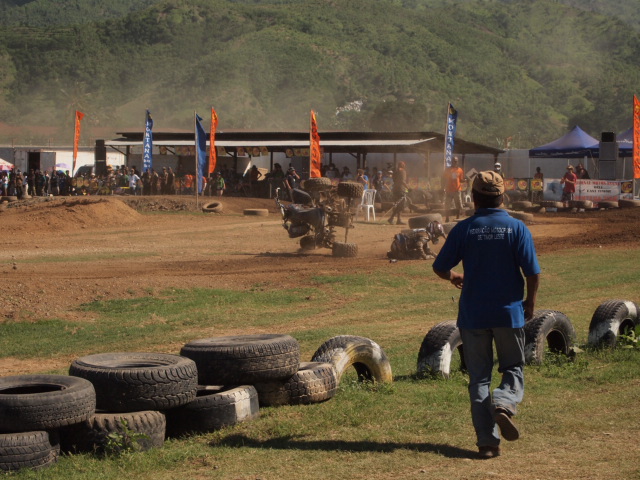 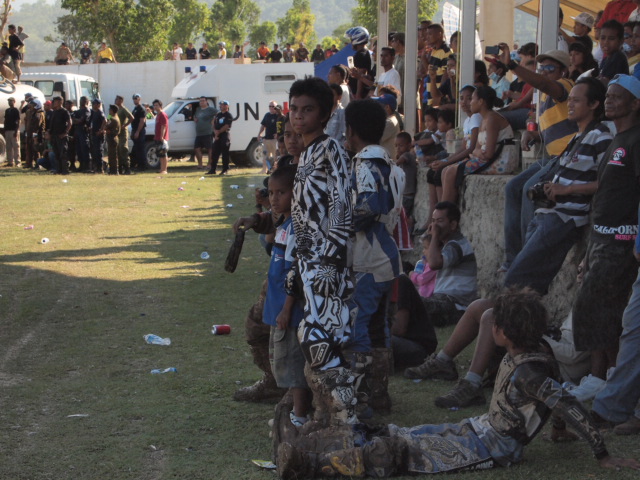 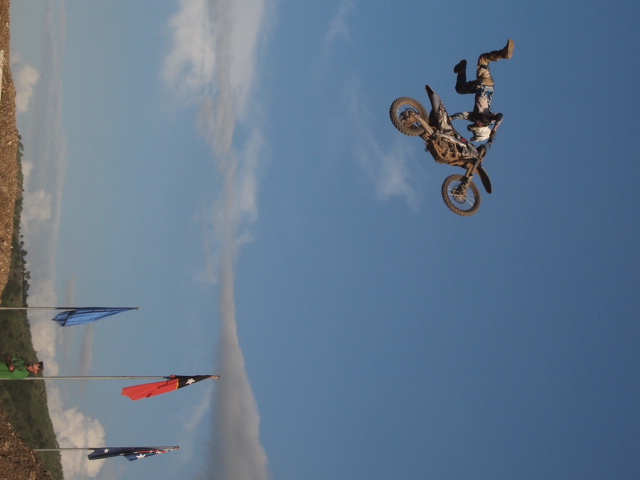 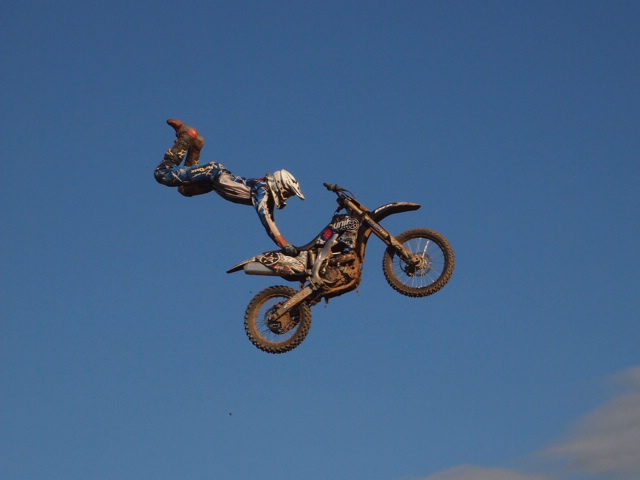 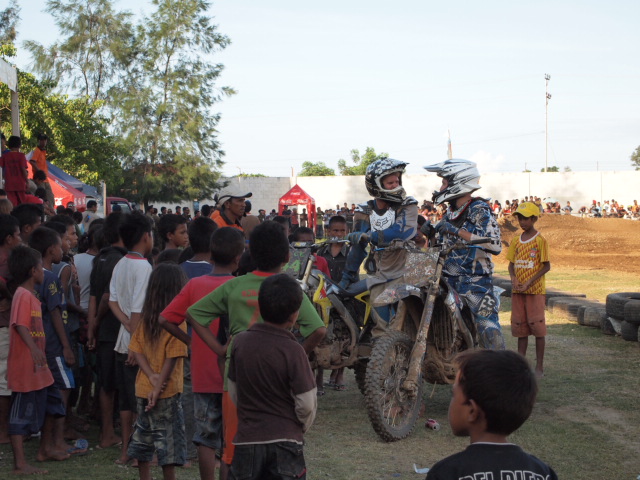 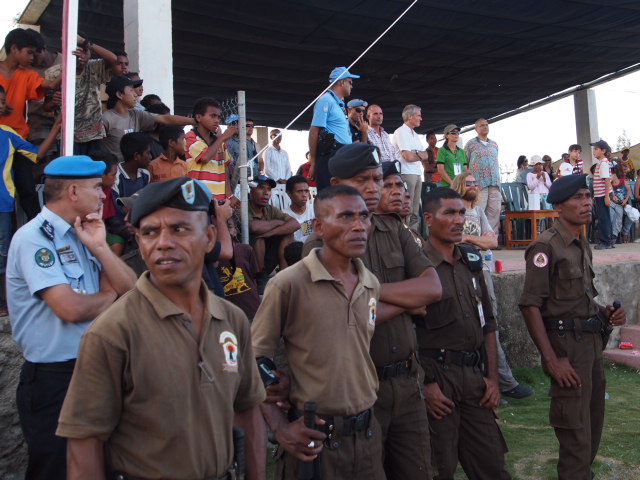 Tuesday finally arrived – today was bike day. The only thing standing in my way was a sleepless night of running to the bathroom to fill the white porcelain with brown liquid. With my tummy in cramps, we caught a taxi to SDV office, where we begin our paper work for the motorcycles. With a payment of $69 USD each, we were told to come back at 2pm.

The four hour wait was the hardest and longest four hours, much longer than that boat ride we had down three days before. Walking to the office, I must be feeling better. A local guy who works there took us to the customs office, where we showed the officer where to stamp our Carnets before heading to the holding yard, just a block from our guesthouse. Where were given our precious bikes. As I kicked the bike over, I realized I had my freedom once again.

High above Dili we wound our way up the mountain, on the unpredictable narrow road. This was the one of many mountains we were going to hit over the next few weeks. This was a sharp contradiction to the flat, straight roads of Australia. Within the first 30 minutes I had been nearly taken out by a tractor with a huge bucket on the front, loud colourful busses crammed full of people, and the of course the UN 4×4’s. At this point I was sick of risking my life and let Frank go first.

Two hours later we had achieved 80 kilometers, turning off the main road we head for a small village called Hatublico. This village sat under the towering Mount Ramelau. Mount Rabelau was known to have amazing 360º views of East Timor. From the beaches of Dili to the seas of the south. Looking East and west all I could see were infinite mountains. All the stories were completely true. 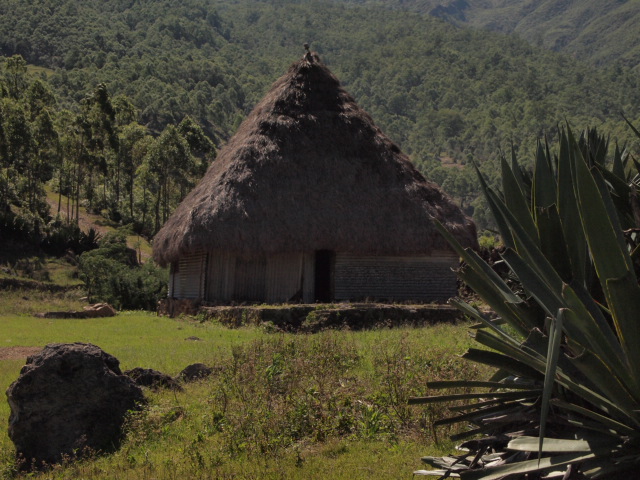 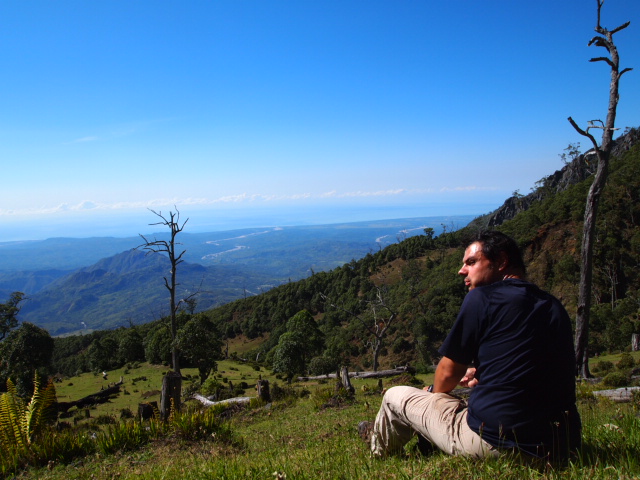 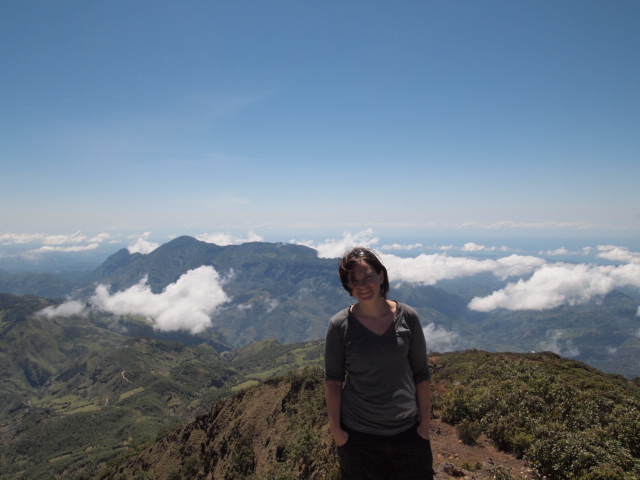 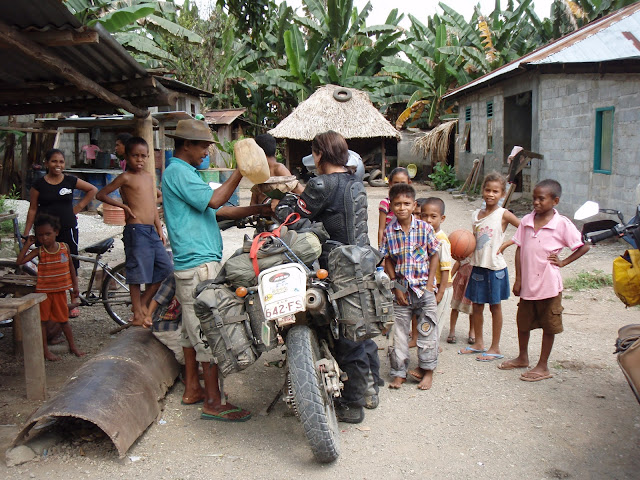 After a quick decent we head south, aiming for a small beach village to spend our next night. But after hours on the amazing yet again unpredictable road, through the very gorge that made up Mt Ramelau, we came across a town called Same. Same wasn’t a very nice town, I filled up with gas from a jerry can and got the hell out of there. That’s when we decided to head for another village called Saui on the Indonesian boarder. 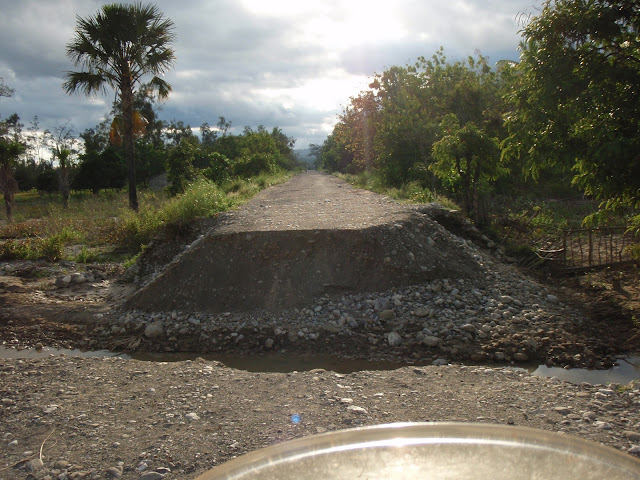 Driving along the coast through small traditional villages, one after another. As we rode along, we came to one of the first rivers I had seen from the top of the mountain. Thankfully this one had a bridge across it. As I rode onto the bridge I could see that something wasn’t quite right, the end of the bridge turned down wards. Carrying on, I discover that the bridge was indeed broken and we had to turn around. 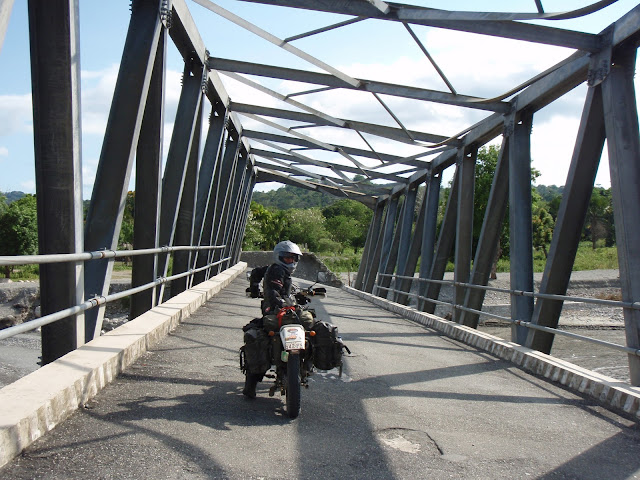 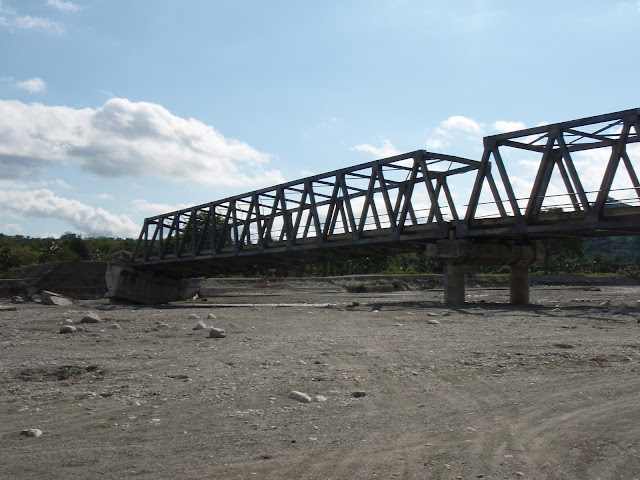 We eventually arrived late into Saui. It had been a long, hot, dusty day, we seek refuge in a monastery were we found clean and cheap beds. This monastery is located next to the ‘Saui Church Massacre in September 1999. One of a number of massacres perpetrated by a pro-Indonesia Milita of the Indonesian withdrawal of East Timor.

Today is Friday (a local public holiday). I have been in East Timor for exactly one week and today, I head for the Indonesian boarder into West Timor. As we were about to ride out of the Monastery, we were confronted with 6 UN trucks skidding to a stop in the middle of the driveway. Men all carrying weapons leaped out of the vehicles. I was in front, heart beating I just rode around the guys, hoping not to get caught up in something I didn’t belong in.

Less than 30 minutes later we arrived at the boarder, with its scattering of temporary buildings. As I handed my passport over I was greeted with a ‘Kiora’! I laughed and asked where did he learn that? – apparently NZ troops were helping them build structures for a few years. They didn’t get any tourist at this boarder crossing, so we were in the ‘spot light’ with photos been taken of us with every officer! Eventually we were allowed to move through the rusty unguarded gates into the Indonesian side. 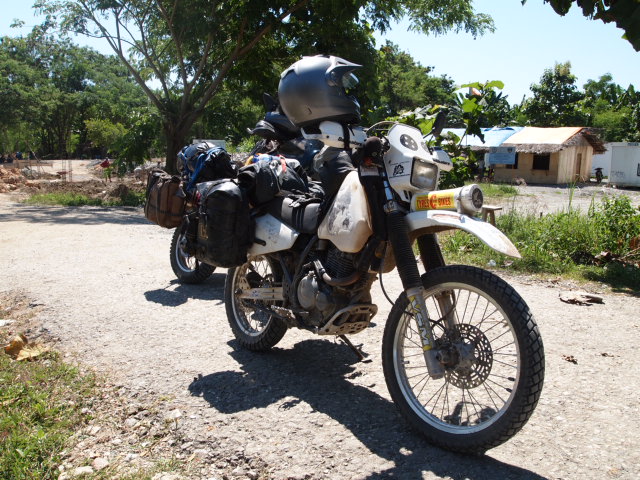 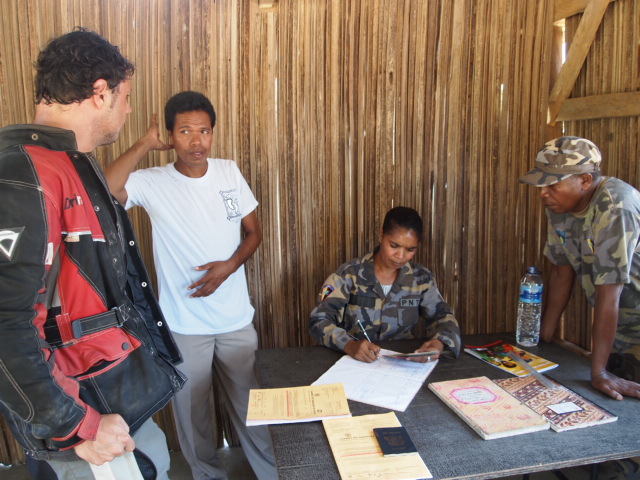