My plan was to follow the small coast roads to get to Kanyakumari. The problem was the turn off looked like a new development, a new express highway. Luckily it was still closed so I headed for the next turn off past the village. This road was narrow, surrounded in fields of freshly cut hay. With the road winding its way through the fields, I rode over piles of hay dumped onto the road for collection. People bend over trying to gather it up or spread it out. I think they put it on the roads to allow vehicles to roll over it to remove the seeds.

As the road forks, I stop to ask two farmers standing on the corner chatting to one and another, which direction is Kanyakumari? They point me in the direction I was already heading in. Alarm bells rang as it could mean one of three things, I am actually on the right path (I don’t think I am, hence stopping to ask) or that they don’t really know where I want to go, or they think I want to go somewhere else.

Where they lead me turns out to be the centre of town, and like all the other basic Indian villages, it as based around a temple and a bus stand. Following my own nose to the centre, I stopped at an intersection, head down trying to work out which way from the subtle marks on my map. A man pulls up next to me in a truck and asks if I need help. I sure do! He sounds like he knows what he’s talking about and points me to the road I should be on, the one I turned off in the first place.

The narrow road ends and I turn right on to the new express highway. Speeding along side buses and trucks, the country side flew past, blurring into one image. Sighing to myself, as this isn’t exactly what I was hoping for.

I stop for lunch at a road side stall, on an intersection. Again, I didn’t really know where I was going, so I thought I would stop to have something to eat and work it out. The whole town decided to come and see me and my bike. All sitting outside the shop on the wooden benches while I sat inside eating my lunch. Once I had finished I moved outside and joined them drinking my Chai. One woman spoke a tiny bit of English and asked me questions. Repeated it for the rest of the crowd. They then took their time to discuss it and she came back with the next question.

A few kilometres out of the half way point was a place I could find a hotel and rest for the day. I looked at the city, and decided I still wasn’t ready for another massive, congested city. I rode along the bypass and headed further south. The bypass joined a larger state highway with another ill-designed centre concrete barrier . The best part of the second half of my day was to see mountains emerge from the haze, giving me something to take my mind off the boring straight tarseal road. 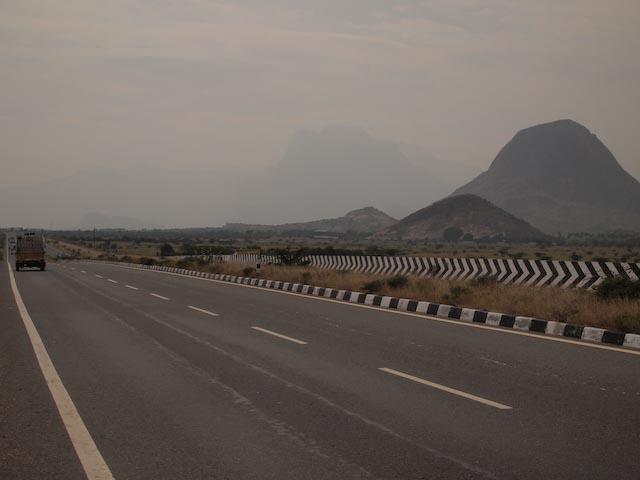 Stopping to take a pee behind a prickly bush, I drop my pants quickly and try hard to speed the whole process up as I could hear the sounds of scooters approaching. Sure enough a couple of guys on their bikes stop to stare at my bike and my white bottom. Buttoning up my pants, leaping onto my bike, I speed past them. Now I noticed there were a few others peering at me, which were not so obvious before.

Ridding into the small town of Kanyakumari was a relief. It was a pretty township and it had everything to offer. Pulling over, I sat on the kerb fully dressed in my motorcycle gear including my helmet and studied my guide book map, trying to work out where I was in relation to the guest houses. Up to this point, I had been watching a guy following me on a scooter. Pulling up beside me he asked if I needed a guest house. I said yes, of course I do, but I am ok, Thanks. He kept telling me these expensive hotels for around 800-1000 IRP ($16-20 AUS) a night. I told him, I am fine I don’t need your help, plus that is way expensive for a hotel room! He wouldn’t let up, so I told him in plain English, if you want to show me these cheap places, you can but only if it doesn’t cost me anything, because I am not going to pay you. He finally got the message and left me alone. 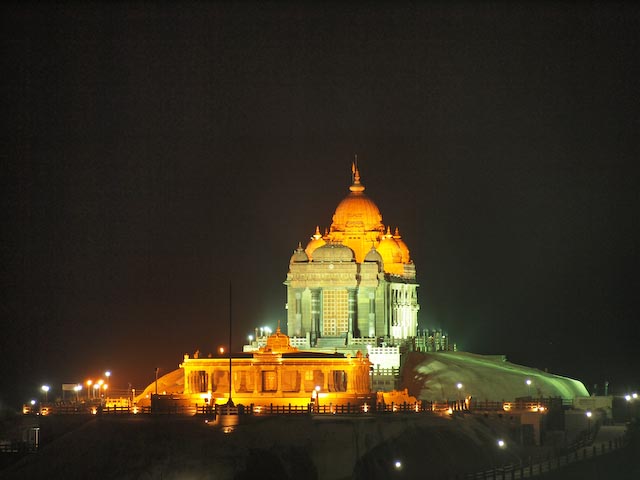 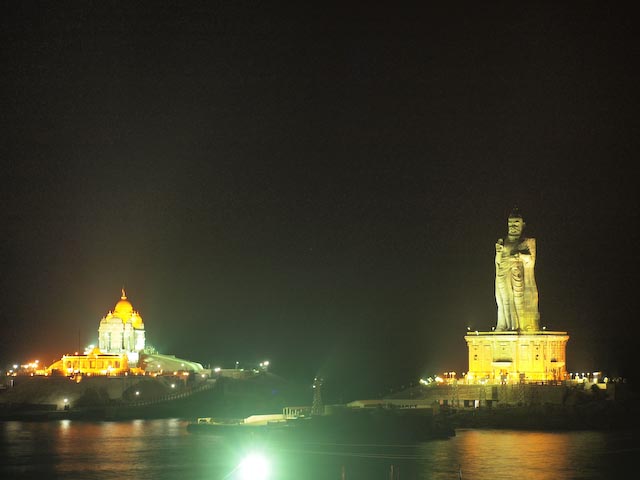 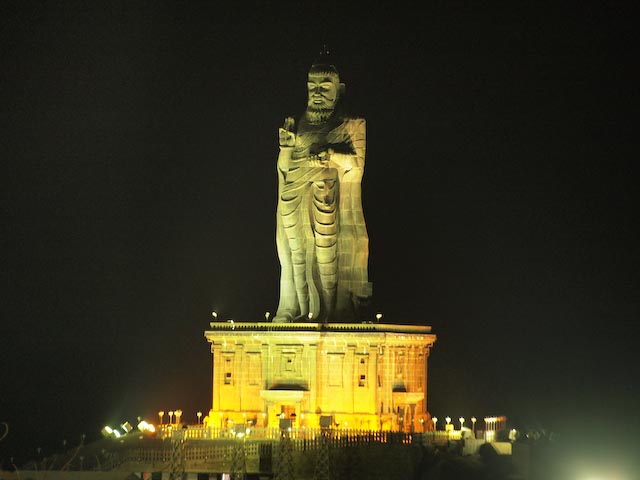 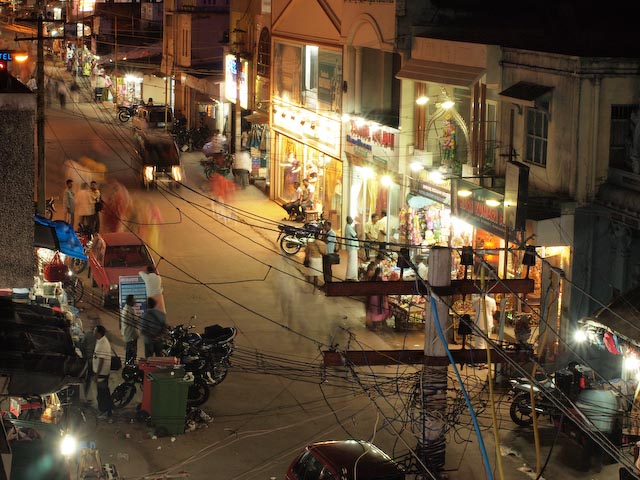 My view from the roof of the hotel – People just keep on shop up until 9pm
I liked this place straight away, it had a nice relaxed feeling despite the number of Indian and western tourist flocking to the market street. Kanyakamari is the most southern point of India, from here onwards I will be heading north, I would’nt be this south again until I hit Africa. 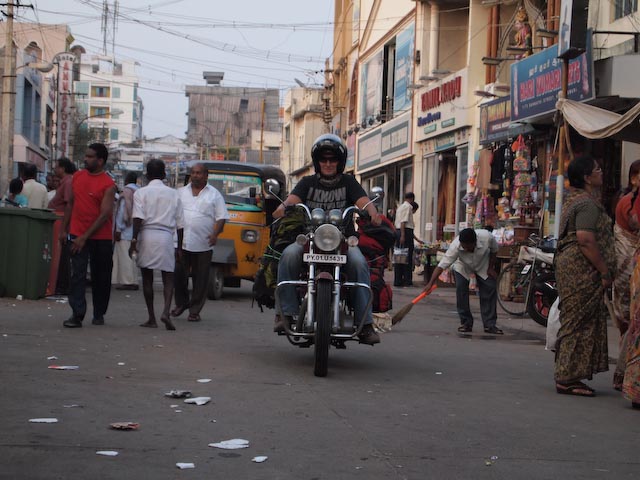 Look who turns up – Colin and Daphne (Well you can only see Colin!)

I spent the days walking around the fishing village just north of the village centre, spying into people’s houses. A few children would come up to me and hold out their hands while they said ‘band practice’, I looked at the first kid, and raised my eyebrows – huh? ‘Band practice…’ I realised then he was asking for money, not for band practice but as an excuse for the money. I walked away without saying another word.

To finish up my tour of Kanyakamari I took these photos of the main tourist attraction to this village. I had been here for two days, and still hadn’t managed to get myself out into the boat to visit them in person. 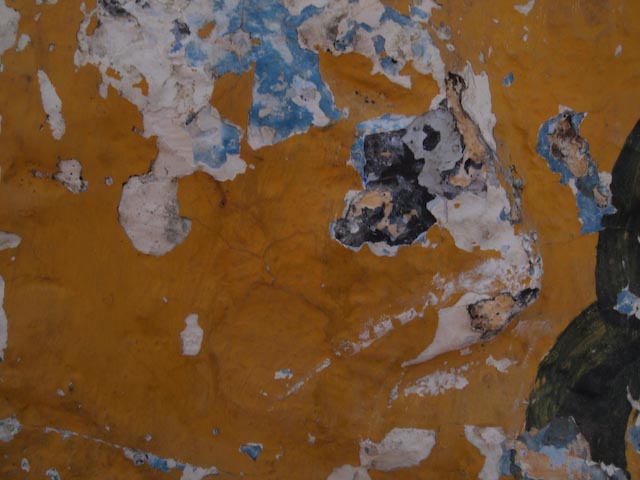 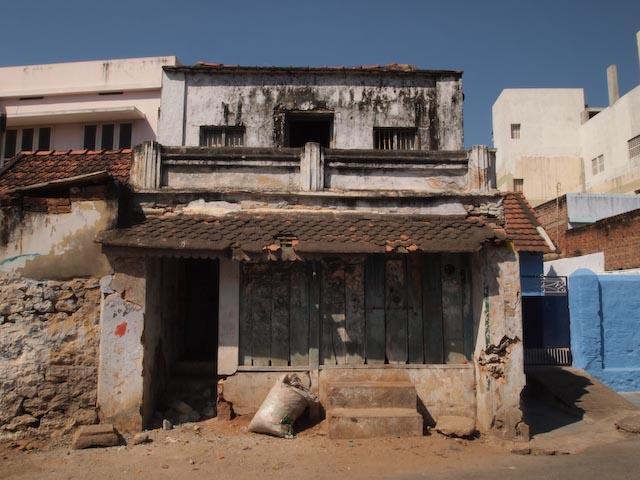 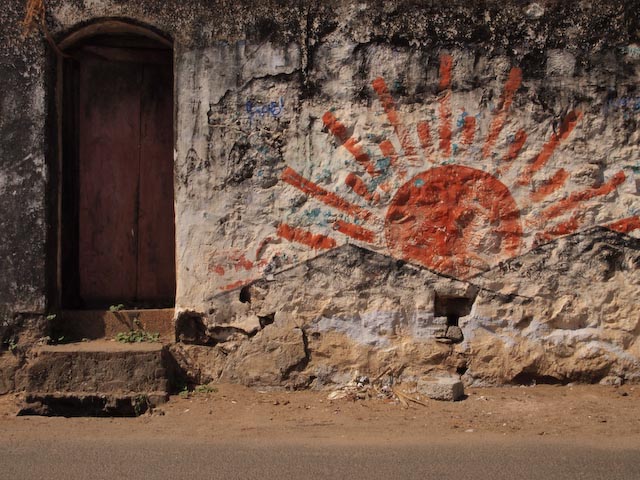 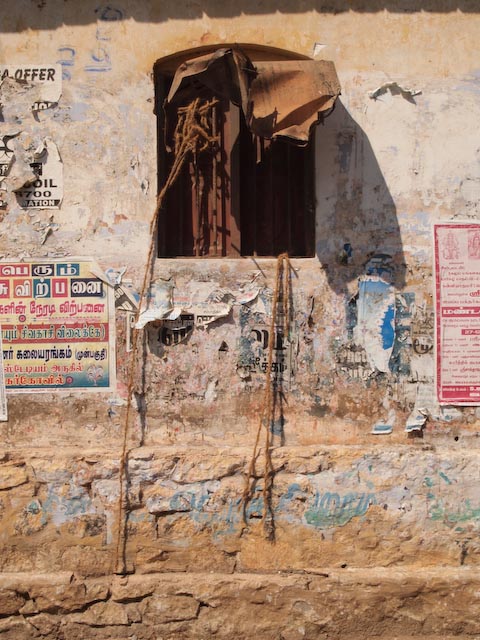 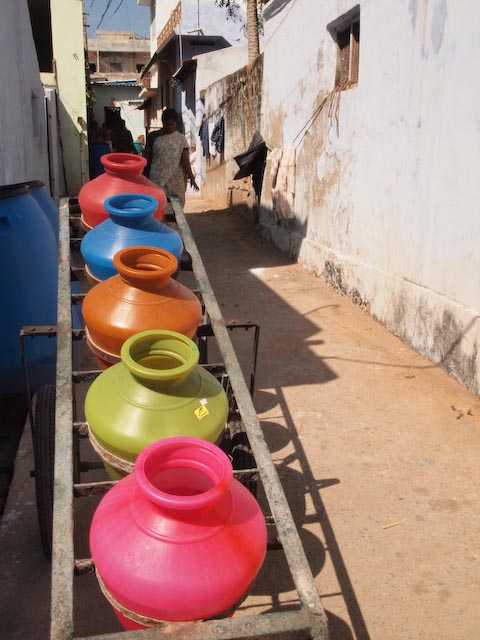 A small man pulls this around delivering water to all the house holds.