I knew from walking around the day before, exactly how to get out of the Maduri which made my morning navigation a lot easier, passing the same water tank we had walked out to the day before. There was little traffic and I was feeling really fresh from spending three days off the seat of my bike.

It was relativity straight forward, navigation wise, this was a first in India! There were clearly labelled signs in English. I pasted several Chai shops before deciding I needed a mid morning break. With a Chai in my hand and a deep fried battered boiled egg drizzled in ‘samba’ sauce in the other, I stand over the table looking at my map. How can it be this easy for a change. Though I am still only riding at 40 to 50 kilometres per hour due to the traffic and animals.

For once, I actually felt like stopping and taking photos, I was trying to explain to someone, that a lot of the times when I am riding, that some I get into a mode of just enjoying the ride or getting to my destination. Then afterwards, I realise, crap – I should have stopped to take that photo. So, when I passed a cool looking man on a small motorcycle, loaded up to the hilt with plastic buckets, I purposely speed past him to stop further up ahead and waited for him to arrive, smiling to himself. 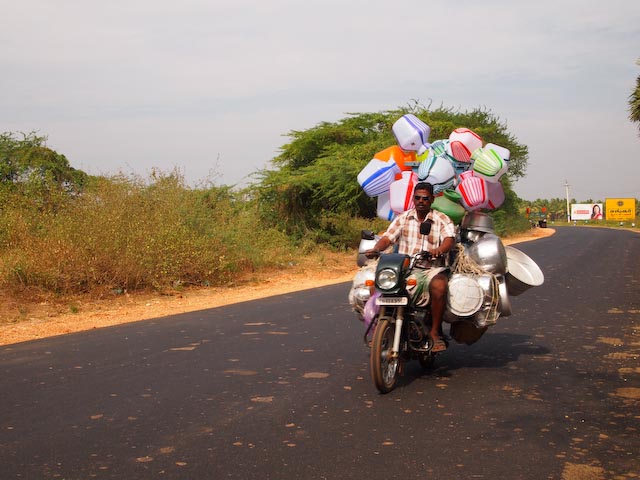 Some times, I cannot help draw comparisons between India and Russia, its obvious that the cultures are completely different, but the government building can sometimes look the same. When I was in Chennai, I learnt from a trade show that the government is looking at cleaning up the slums, removing the dangerous highly combustible palm leaf houses and giving the people these concrete apartment buildings. I am not entirely sold on this idea. It does on one hand reduce the overall area required for the slums by increasing the living density by going upwards with a tower. However, these people are use to living in a community based area, where people are proud to help each other.

This model of development has been repeated in different countries, with completely different outcomes. I’m not entirely sure if its ever worked up to the expectation of the government or to those who are forced to move into them. 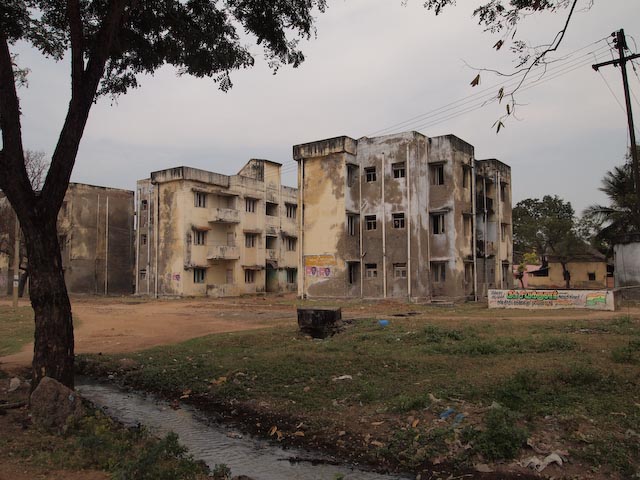 This is obviously a smaller development, within a small township. But you can see that the government has done nothing to the upkeep of this building or the surrounding areas, which in turn does not encourage the residents to be proud of where they live. I can just imagine in years to come, the piles of filth, building up from people dropping their rubbish from the windows, and the injures that could occur. A possible cartoon idea??

Driving into the township of Rameswaram was a battle through the traffic and human bodies, not to mention the cows. The whole town, yet again, was based around the temple which was the only drawcard for this little village. Smack bang in the middle was the  temple square. Riding around the outer red and white striped walls, I got a good idea of the simple layout of this village.

At the opposite end of the temple, where the people move from the temple to the holy swimming area, was crowded in people. I was down to first gear and paddling my bike through, clutching it the whole way.When a tuk tuk came up behind me blaring it’s horn, people miraculously parted in front of me. 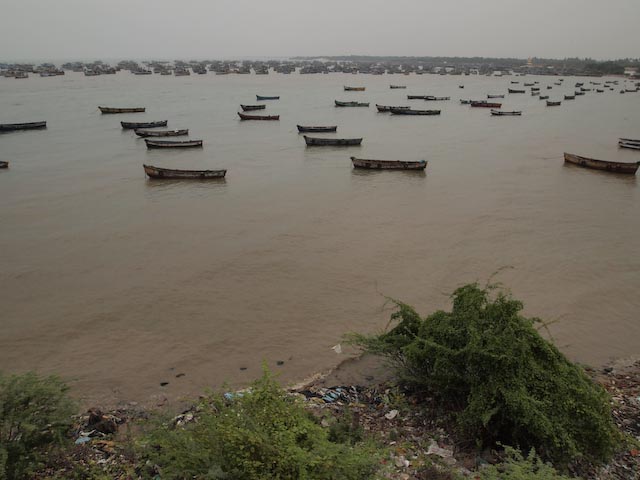 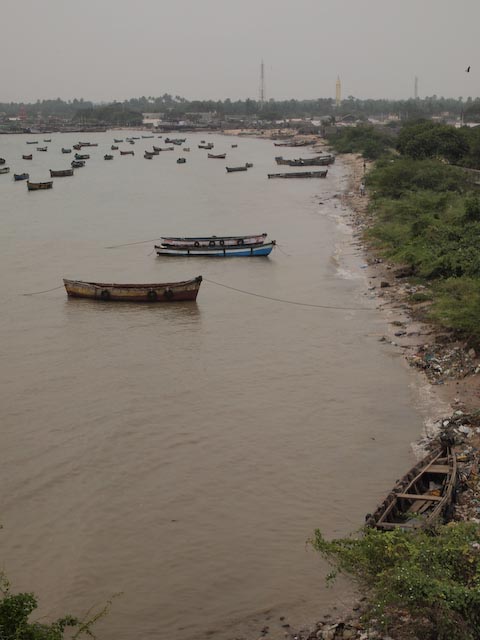 My horn is not in the original location, mounted in the indicator switch. Since my bike is second hand it comes with second hand alterations. My horn is located on the other side of the decompresser leaver. So when I need to press it down, I have to move my hand completely over, releasing the clutch. Therefore when in slow traffic, there is no way I am able to toot. This is a catch twenty-two as I need to toot to be able to speed up and release the clutch! I really need to get this back to original. 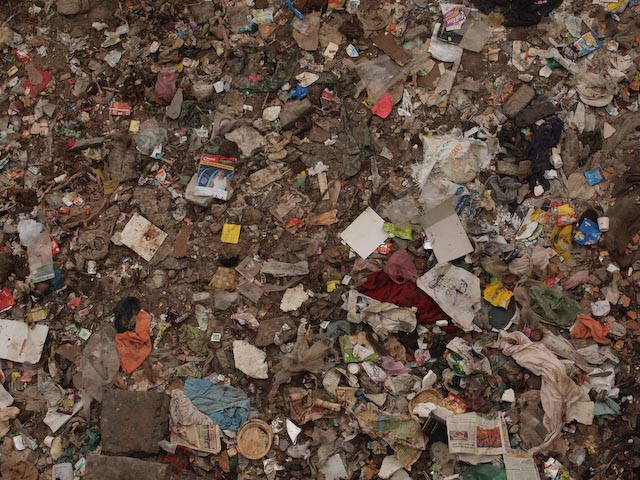 Rubbish from my hotel, just thrown over the balcony into the sea.

After unloading my motorcycle, I jumped back on, pushed through the crowds once again, to ride down to the very end of the spit. Watching the buildings peter out, I found myself riding on a tar sealed road, with sand dunes on either side. Beyond the sand dunes and through the tree trunks I could get small glimpses of the ocean that encapsulates the spit. The trees fade, the sand dunes flatten out, and I find myself surrounded with the colour blue. The blue green on the ocean and the fading blue of the sky into the horizon. I had spent so much time in cities that I found this completely magical.

I arrive at the end of the spit, the sky is changing colour as the introduction of grey appears, this could be my first rain in India approaching. Parking my bike in between two cars, I turn the engine off and slid off the seat. I was then approached by the parking attendant. Apparently I was parking in the wrong area, a place not set up for motorcycles. Grudgingly as I saw no difference, I got back on, started my bike and moved it to where he was pointing. Next to a palm leaf shack selling drinks and snack foods, exactly in the soft sand.This didn’t bother me as I had my fancy home made large side stand foot. My motorcycle was the only one parked here. 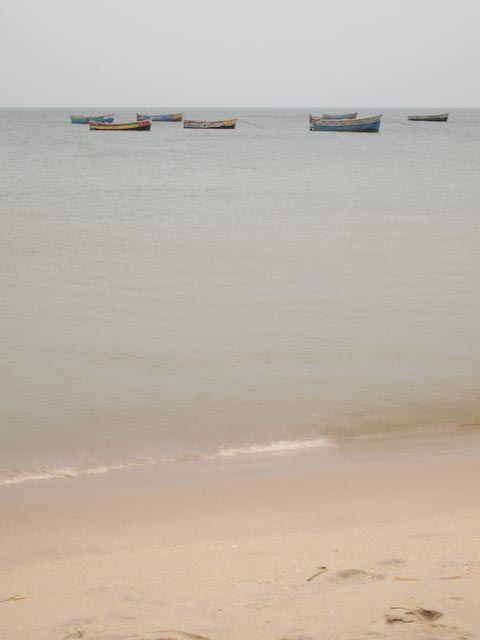 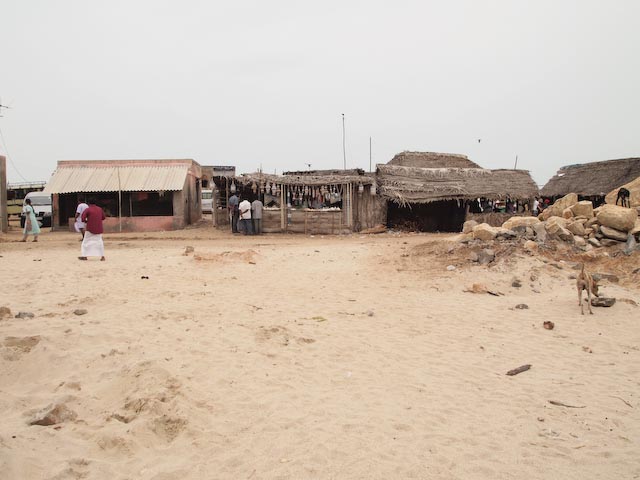 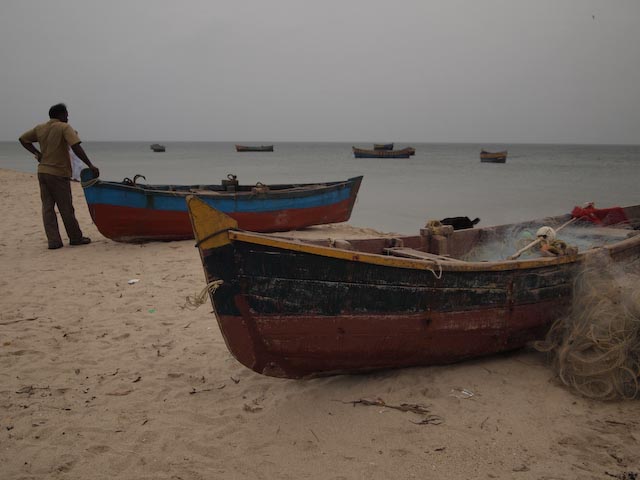 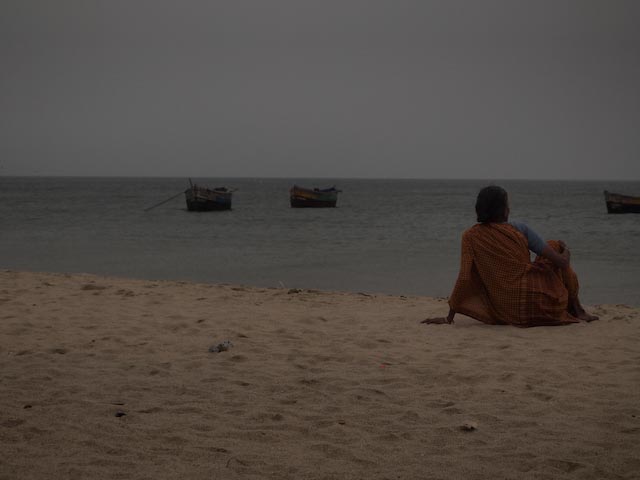 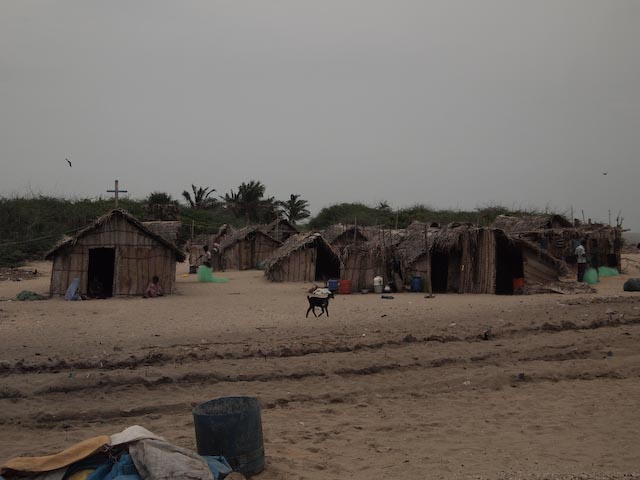 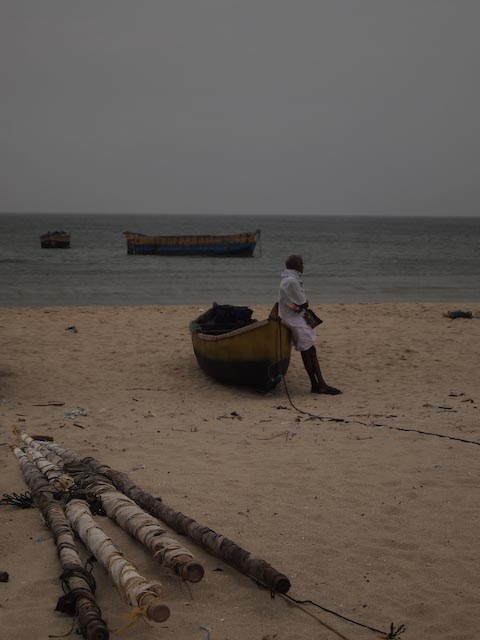 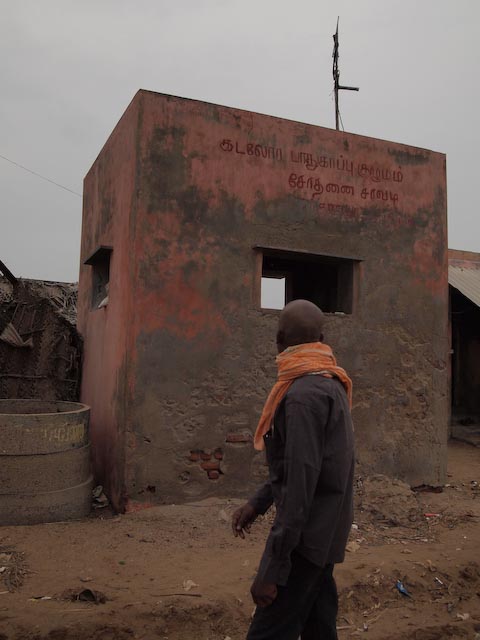 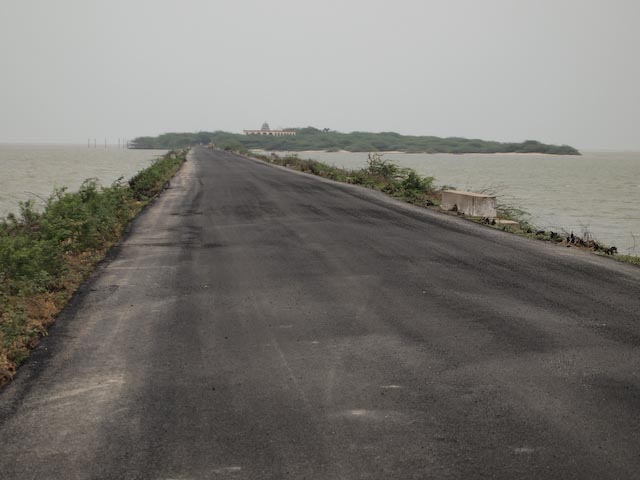 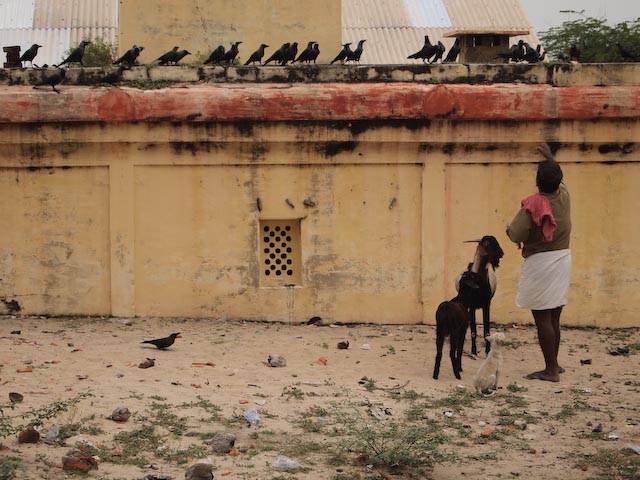 On a clear blue day, this place would be a great place to have a picnic with your friends and family, as you could spend hours watching the fishermen preparing, fixing, and maintaining their fishing equipment. Today, with the dried palm leaves of the structures, the grey sand, combined with the grey skies towering from above, it gave the place a solemn, moody feel. Which actually coincidentally matched my mood with the parking attendant.

As soon as I felt the first drops of rain hit my exposed skin, I climbed back onto my bike to head back into the main village. While standing on the pegs preparing myself to kick the motorcycle over, I felt people watching me, looking up I was surprised to find it wasn’t just Indians. There were a few white skinned people standing near their vehicles watching and talking about me. Surprisingly, I actually found myself wishing these westerners would come up to me and ask me questions, instead of standing back well outside the our own circle of comfort. Why is it, that Indians have no personal circle and most westerners have a huge one? This feeling completely contradicts my feeling about when I have locals approaching me. Maybe I was just starting to miss company and having an actual conversation in English, beyond the two main questions Indian’s shout at you.

Back in the main village, I walk around the township, where my fascination with cows grew. Within one short street, I photographed all these cows. Everyone around the world knows cows are sacred to India’s Hindu’s religion. Here in Southern India, this gives the cows the rights to wander everywhere, amongst traffic, markets, beaches, basically anywhere! At first I wonder what they eat, but it was quickly evident that they graze on roadside grass verges, dropped banana skins, paper, really just about anything. They are even slightly cheeky, trying to steal off the distracted fruit vendors table. One day I brought a bunch of bananas of an old woman sitting on the dusty street. As I placed them into my bag, I felt a nudge from behind, looking about me I found it was a cow trying to pick pocket me! 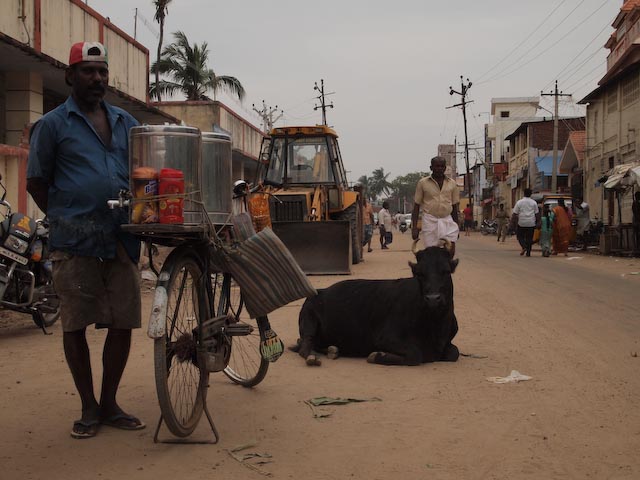 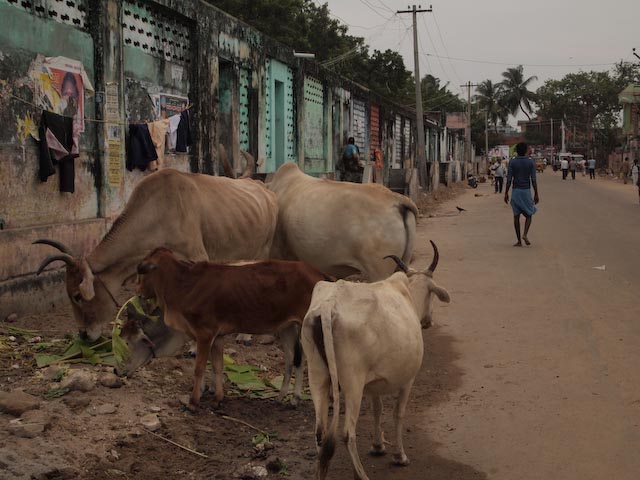 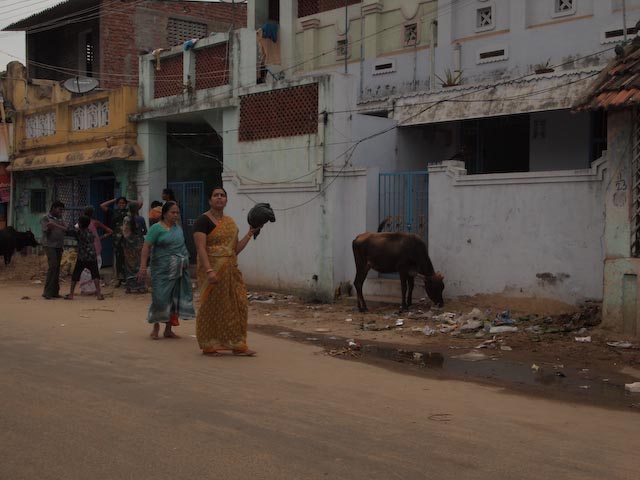 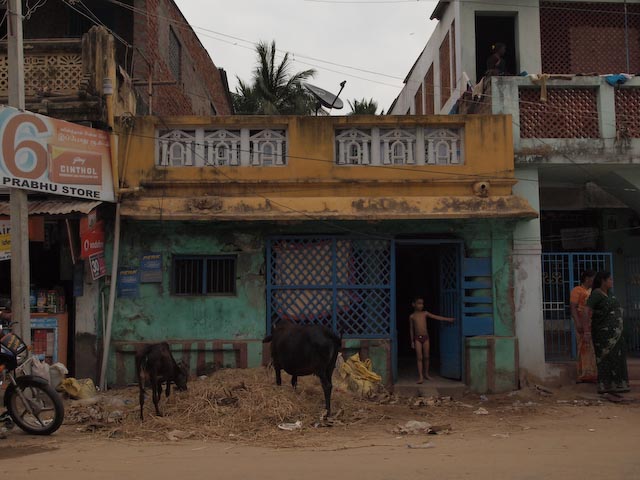 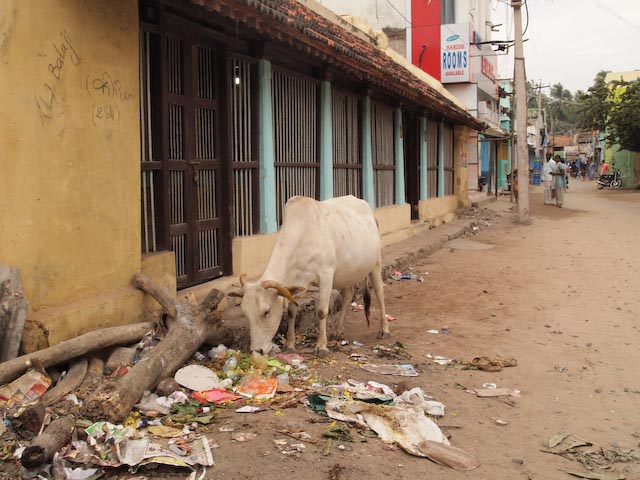 When I first arrived I asked my shipping agent, who these cows belonged too, he said to me, ‘No one knows, just don’t hit one because then you will find out how many people own the one cow!’ I’ve since made sure when ever I see a cow, to slow down and give them a wide berth. 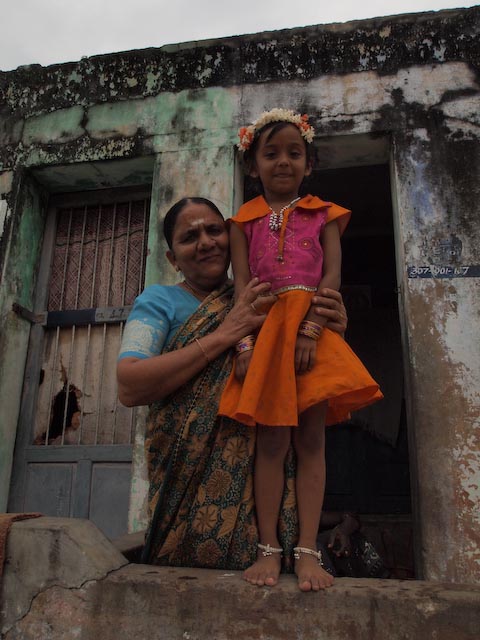 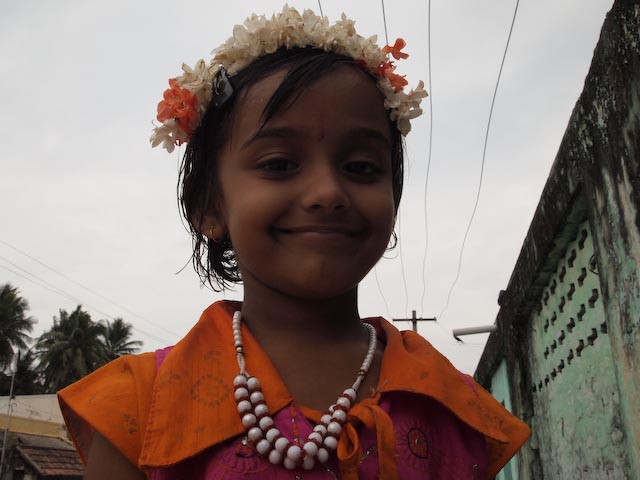 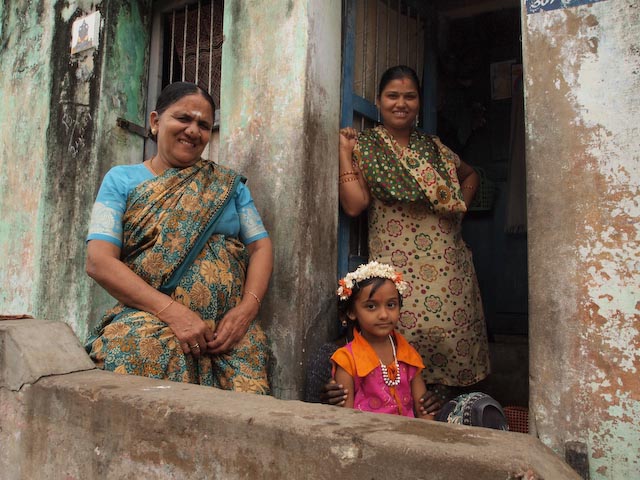 While walking around, I passed a bank of simple single story apartments, lining one side of the temple walls. From what I could tell, they looked like a single room apartments. Curious to find out who lives in these buildings, I was lucky to happen to pass a family sitting on their small porch. The family was really cheerful and actually came all the way from Nepal, which shows in their facial features. The woman standing in the back, is the mother of the young girl, she spoke basic English and was able to answer some of my questions.

These buildings were built to house all the people who work for the temple. Quickly poking my head into the house, sure it enough it was a single room, a tv in the corner, bedding rolled away. There were no windows only a small area on the concrete block walls where they have used pattern open blocks instead of solid ones. I left them with the promise I will return to give them a copy of these photographs, thinking there was a photography shop in this village. But I was wrong, I now wished I had got their address off them. 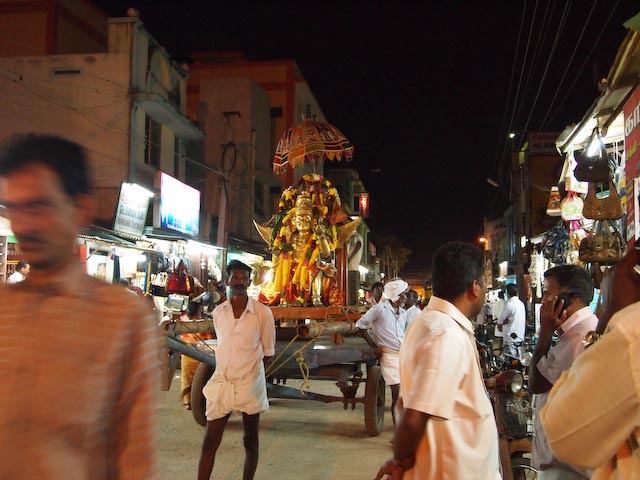 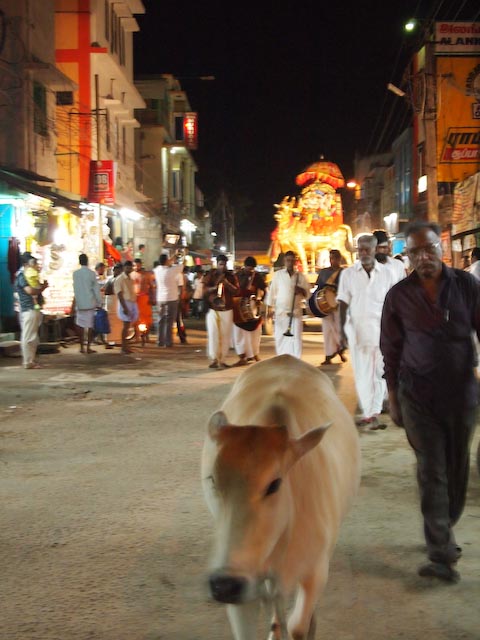 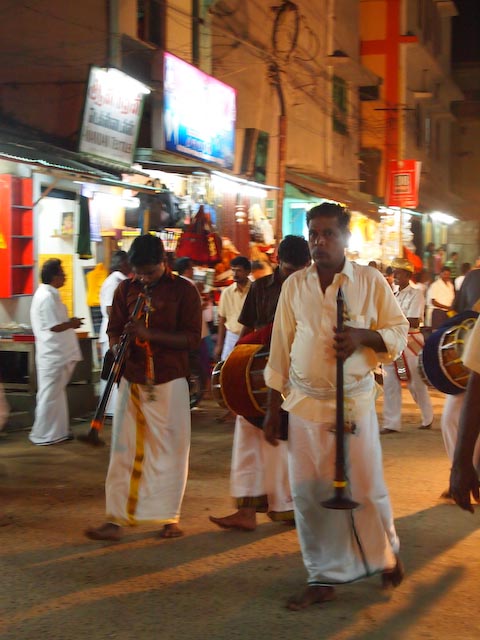 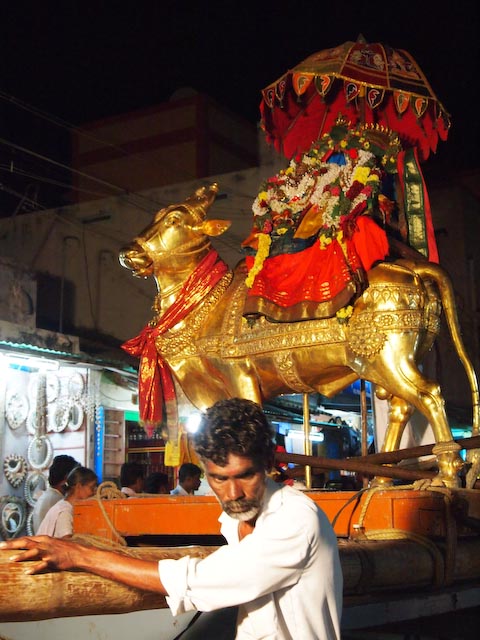 Of course its a cow!

After a thali dinner (Thali is a ready made meal, rice and a selection of sauces) I brought a chai from one of the street stalls. Standing in front of the stall with my hands wrapped around the tiny plastic cup, I heard music approaching me. Peering down to the end of the street, I could see people dressed in white clothing, carrying a large objects high above them.

Gulping down the remainder of my hot sweet tea, I pulled my camera out from my bag. The shapes appeared from the gloom as the gold statues twinkle in the sport lights. A helpful ‘want a be’ guide approached and told me I had timed my visit to Rameswaram perfectly to coincide with the once a month temple closing ceremony. After the last statue passed, I declined the man’s offer for him to show me the most amazing sights within the temple and walked home to my hotel for the night.