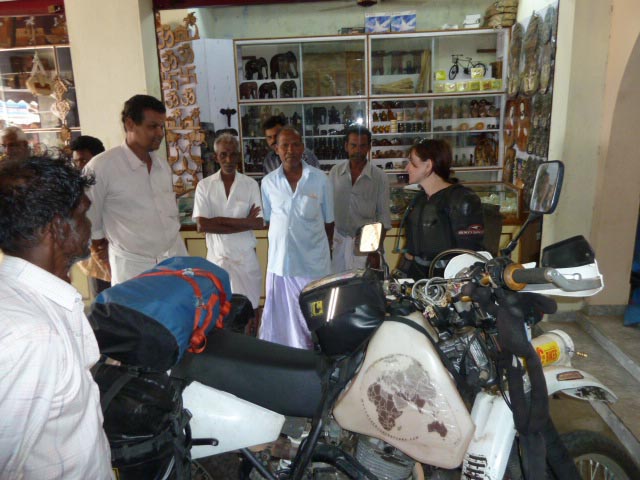 With the usual start to the morning, answering questions fired at me by the locals that surround me. I now have proof as Daphne takes a picture.

Colin, Daphna and I join motorcycle teams to ride together to the next destination. Heading out of Kanyakumari, two kilometres later we arrived into our destination, a small village of Kovalam! Laid out before us was brightly painted buildings, stacking themselves on top of each other, ensuring that everyone got a view. The tiny fishing village lacked all the tourist amenities we had heard Kovalam was renown for. Turning towards each other we laughed as this was another case of another village having the same name.

Because our destination wasn’t very far away (less than 80 kilometres), not only did we start later in the day, but we could take it easy and follow the coast as much as possible, turning off the straight and busy main state highway onto the calmer, narrow local roads.

These roads were beautiful. We found ourselves riding under huge coconut tree plantations, past people making ‘Coir’ from coconut husks and through colourful fishing villages. At times we would turn down a road only to discover that it was a dead end which would force us to ride back to the main road to try yet another one. 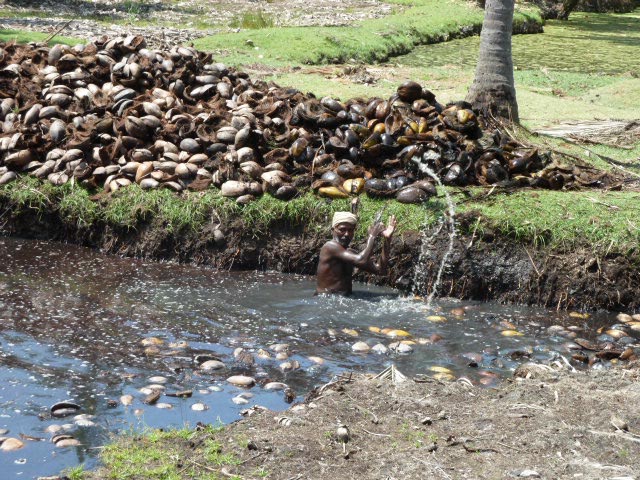 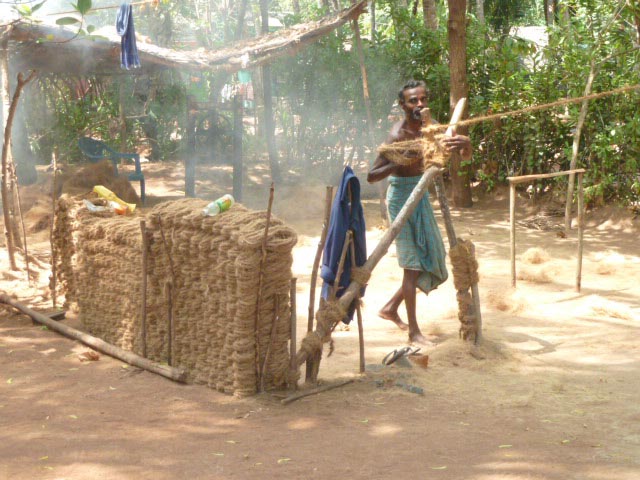 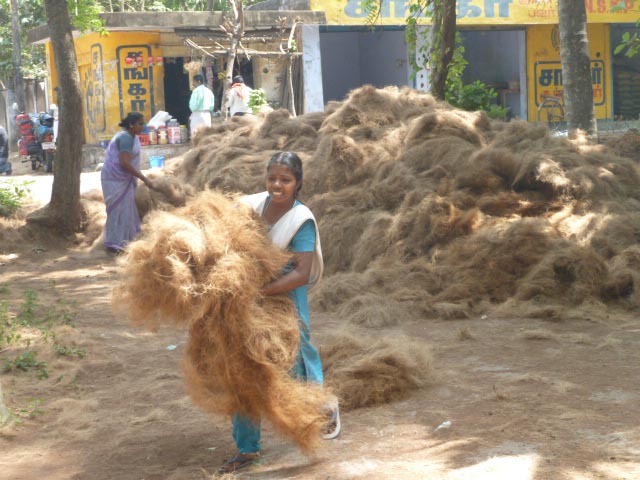 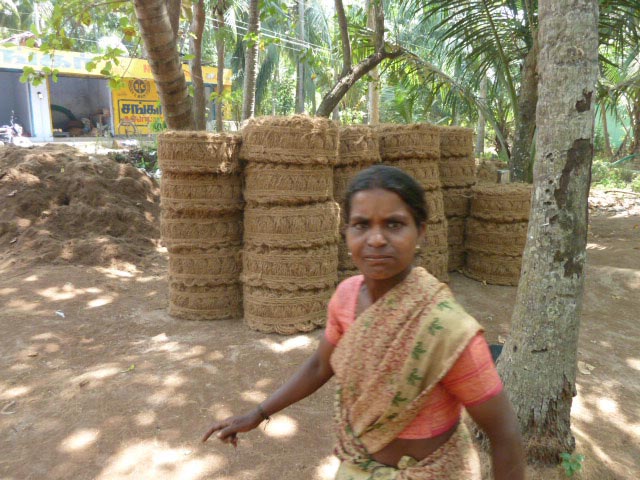 Extract from Wiki –
Coir is a natural fibre extracted from coconut husk and used in products such as floor mats, doormats, brushes, mattresses etc. Technically Coir is the fibrous material found between the hard, internal shell and the outer coat of a coconut. Other uses of brown coir (made from ripe coconut) are in upholstery padding, sacking and horticulture. White coir is harvested from unripe coconuts, and is used for making finer brushes, string, rope and fishing nets

We rode along a narrow paved road that was on top of the dunes. On one side of us was a line of tightly packed in, colourful houses and on the other side was a steep drop to the white sandy beach with the blue ocean beyond. It was so beautiful, so calm and so quiet. I wished I could have stopped there for a few days, sat back and put up my feet. The road finished at a high pile of sand and we were forced to turn around. A lady dressed in a beautiful sari with tiny diamanties sparkling in the bright sun, stepped out into the road and pointed down the a narrow path between two houses. I took her directions as instructions, and turned my bike down the path. Colin and Daphne followed. We popped out onto the ‘real’ road behind the houses, where we could happily carry on along the beach.

At one point Colin and Daphne were in front. We were riding along a paved road but we couldn’t see the sea as there was a high dune between us and the beach. With the feeling of the sun hitting my back, I was completely lost inside myself with pure enjoyment, I was almost singing!

A tuk tuk approached us, with a passenger in the back. This was nothing out of the ordinary until moments before passing Colin, the driver turned the wheel sharply forcing the tuk tuk to veer towards Colin. Colin reacts perfectly and quickly and moves the bike towards the left hand side of the road, meanwhile the tuk tuk straightens up and carries on. I can see the driver is laughing, while his passenger has his arms spread out, trying to brace himself with a look of horror on his face. I am completely shaken as to what I have just witness before me. Colin stops the bike and I ask if they both are ok. I can see in Colin’s eyes, that he is pretty upset by the whole ordeal and would love nothing better than to tell the guy how stupid he is, but he nods his head and starts the bike back up.

It’s a bonus to have a pillion passenger as they have both hands free to be able to take photos on the move. For the first time, I have a film of myself riding along, fully loaded, in a foreign country! Thanks a lot Daphne. 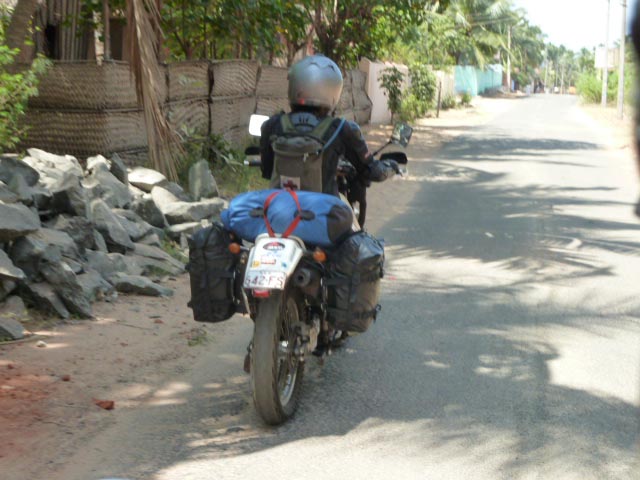 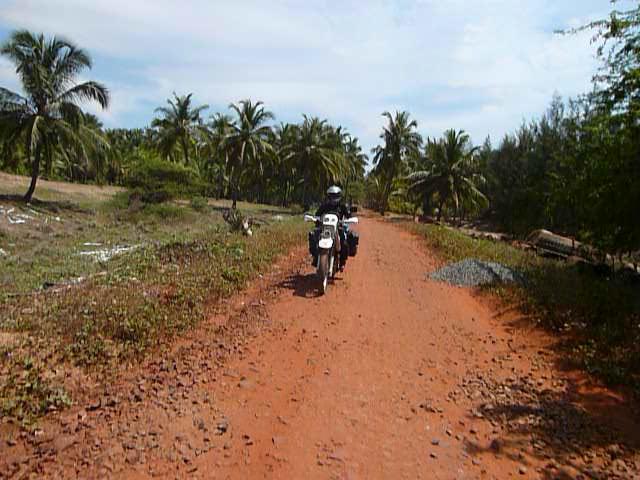 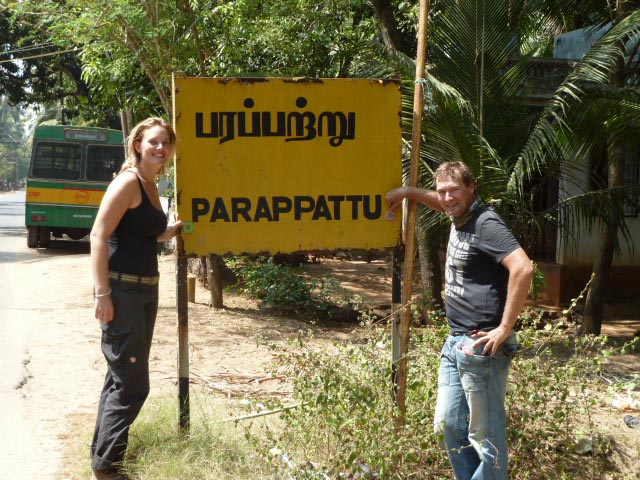 Colin and Daphne have a section on their website where people can issue tasks for them to complete. After completion, the people who issue the task then pays them the value  that they said they would. In this case for every photo taken with their initials on a street sign they get $1 each. 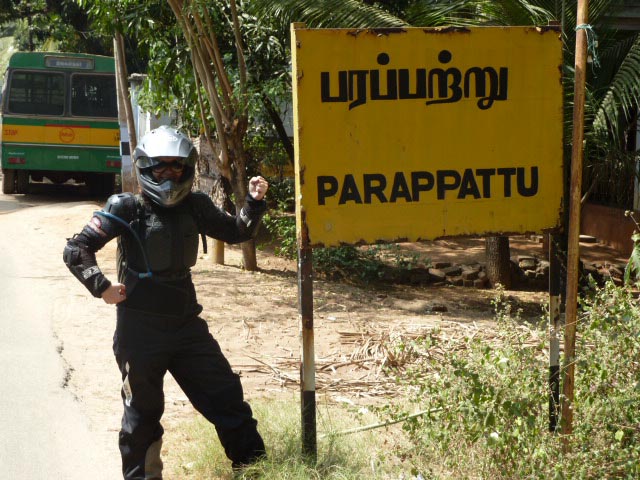 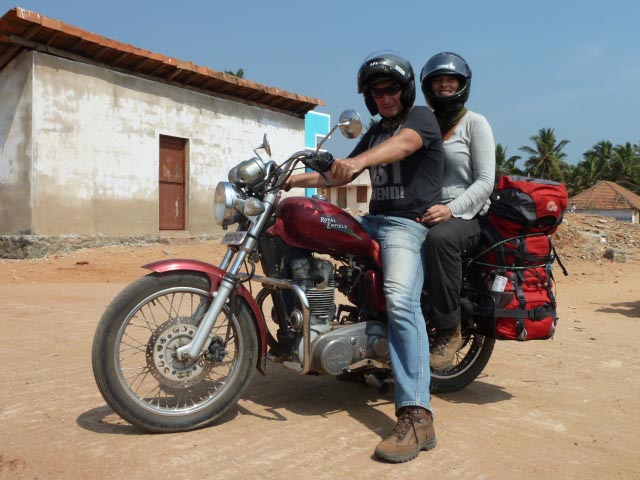 Colin and Daphne on their Royal Enfield

Earlier, I had explained to Colin and Daphne that there were days where you completely forgot about food or you just couldn’t find a place to stop to have lunch, therefore skipping lunch all together. Today was one of those days, as a lot of the villages were just too poor or too small to have restaurants. Eventually we found one, and parked our bikes outside, perpendicular to the kerb, exactly how I would at home. I had long since stopped parking my bike like this, as locals always tell me to re-park. I could never fathom out why. 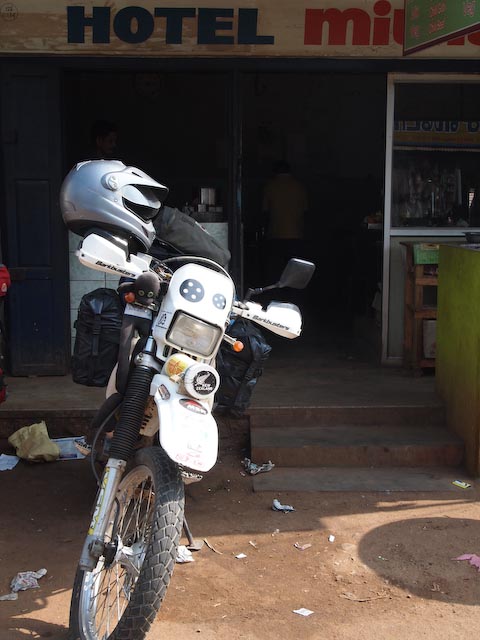 The restaurant we ended up in was a true local one. Daphne complained about the cockroaches running around the green walls which were heavily marked with years of filth. We ordered curry and parotta’s which came on the usual banana leaf. While we sat there, Colin noticed a wrinkly old man with an extreme rubber face sitting on the table next to us, having his afternoon chai and cake. Colin pulled out his camera and filmed the movements of his face.

We had completely lost track of time as we discovered it was now four o’clock. I could feel myself wearing out as I normally liked to arrive at my destination by now. The problem was we had no idea where we were or how far we had to go. Taking a stab, I guess we should have already reached the province of Keralla by now, therefore must be close to our destination. To save some time, we stopped fooling around and turned back onto the state highway and joined the bumper to bumper traffic we had avoided up until then.

Twenty minutes later, we passed under a huge sign slung across the road ‘Welcome to Keralla’. I didn’t need to look at my map to realise we had spent most of the day wandering around in the province of Tamal Nadu, which was only a third of what we had to do that day! Despite the traffic, we covered ground relatively quickly and arrived into Kolvam beach an hour later.

I was pre-warned that Kolvam was a resort beach, but I still wasn’t prepared for the view that opened out before me as I turned the last corner before the beach. A pedestrian-only paved boulevard ran alongside the beach, separating the restaurants, hotels and trinket shops from the sand. On the beach there were masses of white bodies, dressed only in tiny swimmers draped over day beds. It’s been over a month since I’ve seen this many tourist in one place, not to mention seeing this much skin exposed.

To end the perfect day, Colin and I sat down and shared a beer, while we watch the sun dip into the hazy horizon. It was really nice to have company once again, riding along, giggling and making fools of ourselves. One of the best riding days I’ve had in India, it will take a lot to top. 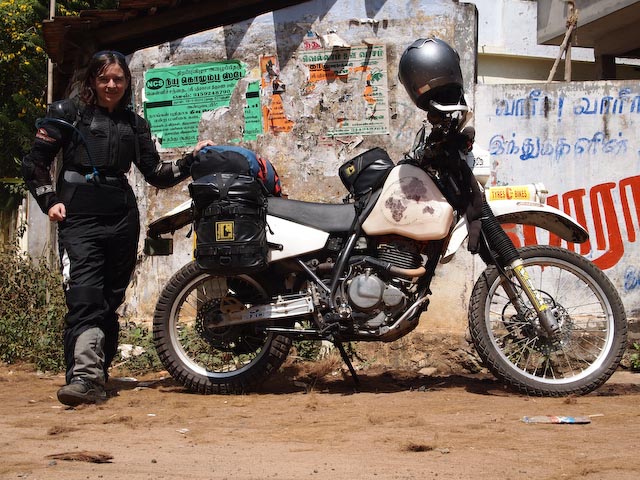