Packing my bags once again, with five Indian men all standing there staring at me while I load up my bike. One old lady kept on trying to sell me a package carefully wrapped up in newspaper and tied with a simple brown string. I could only presume it was some sort of food, but I didn’t need it as I would arrive into Maduri city around lunch time. After telling the lady several times, I didn’t want it, she finally got the idea and walked off to pester someone else. I’m still not use to the attention I receive whenever I stop. I know it’s something I am going to have to work on for the next couple of months.

Riding back down the same mountain road that I rode up a few days earlier, I am still enjoying it despite having already done it. The view does look different the other way around! But I felt as if I was taking it slowly, almost like I was dragging my feet. I then realised that I wasn’t looking forward to being back on the hot, flat plains once again. Half way down sure enough, I hit a wall of heat and was forced to pull over. I desperately tore off my woollen jumper as I could feel the beads of sweat build up along my spine. Packing it carefully away in my little ex-army backpack, I was on my way once again.  Sure enough, the dread I was feeling was spot on. I found myself on a wide four lane highway, with a concrete barrier between the two lanes going in opposite directions. However, even though this road is relatively new, the civil engineer or construction crew forgot to install breaks in the barrier at major intersections.

Therefore I quite often I would realise I wasn’t following a bus, but it was coming towards me! Quickly tiring with the intense concentration on the traffic mixed with the sticky heat, I was starting to lose my patience.  I finally arrived into Maduri city.  Following the public buses into the city, I found myself at the eastern bus station. I could then work out where I was on my tiny guide book city map.  Circling around the central temple, I found a few streets with hotels on them. Parking my bike outside one, I was first shown to my potential dark dingy room and then to the roof of the building. As I step out onto the flat roof, the most amazing view opened out before me. I found myself only one block away from a huge colorful temple.

View of Maduri main temple sitting in one corner, in a grubby white plastic chair was an old wrinkly foreigner lady. She was dressed in a thin cotton dress with spaghetti straps, it was obvious she wasn’t wearing a bra. To complete the picture, you could see she was only wrinkly from months or years of sitting in the sun. She looks up from her book to stare at me and says ‘wow!’ I laughed and said ‘Yeah, we are the complete opposites!’ I took the room, just so I could come back and take the picture. 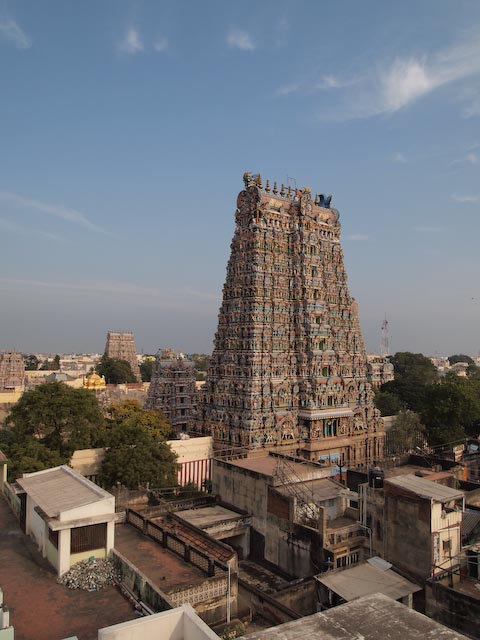 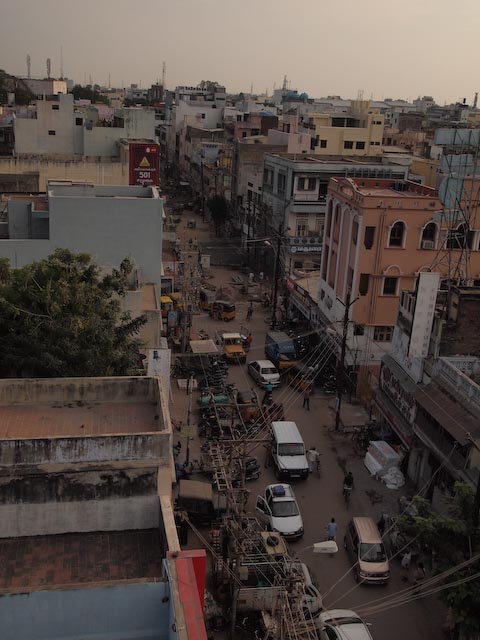 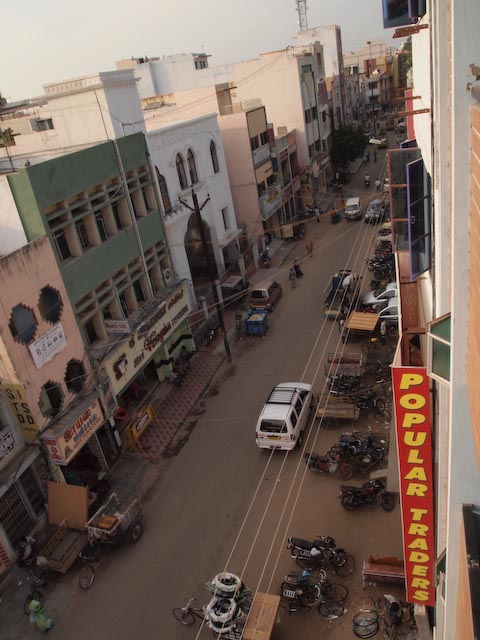 I had completely slowed down, I spent the afternoon slowly walking around the city fending off  people trying to sell me things from postcards, plastic necklaces to antique furniture. As I walked around the temple several times, everyone quickly recognised me as the nonconformist and would me ‘why don’t you come into my shop?’ One Indian man sat down next to me on the kerb, as he recognised me from the hotel. It was actually really nice to speak to him as he would help fend off everyone, just by telling me my story. They all looked at me in surprise with their eyebrows raised and quickly walked off, leaving me in peace.

I headed off in search of a internet café,   leaving my friend sitting on the kerb. When I emerged into the light from the underground shop, my eyes adjusted to the bright sunlight and quickly focused on a Honda Africa Twin. But it wasn’t an ordinary African Twin, it had huge metal panniers, a spare tire and a jerry can all locked into place. I walked into the hotel, it was sitting outside of and asked if I could leave a message for the man that owns that bike. The receptionist look at me in surprise and said ‘it’s that man’s there’ as he points to an older man sitting on the hotel steps reading his guide book. He was dressed in shorts and a tee-shirt, with a bum bag and a Nepalese (hippy) bag. Around his wrist he had several bracelets, which looked like they were from all around the world. He didn’t look like the usual motorcycle tourist but then again, neither do I! I went up to him and asked if it is his bike, and he replied in a thick Italian accent. ‘ Yes, it is’ .

I sat down next to him and introduced myself. I quickly found out that Bruno had just travelled down from Chennai that day, roughly covering 600 km. I couldn’t believe it as it had taken me over a week, with multiple stops along the way. Bruno and I went out for a coffee, I learnt he has done many solo trips before, in fact his business card lists them all! Alaska to Tierra Del Fuego, a round trip to Mongolia through Russia from Verona, Verona to Tokyo, Verona to Kathmandu, a Mediterranean tour, Canada Coast to Coast, New Zealand, South Africa to Verona, Russia, Egypt, Baltic Sea Tour, Black Sea, Australia…. and the list goes on. If I carry on the way I am, my business card could end up been quite similar! Bruno asked if I wanted to come with him tomorrow, as he was heading to Ooty, leaving at 7 am. He should arrive there around 3 in the afternoon, but I wasn’t up for these quick long hauls, so I declined the invitation. I was heading south anyway, I actually want to see India, not rush through it. I said goodnight to Bruno early, so he could get some sleep before his next big ride. Colin and Daphne were meant to turn up that day, but they were stuck at the set of a ‘collywood’ film in the mountains not far from Kodikanal.

Their driver hadn’t turned up yet and they had no idea when he would. Joking I casually said, I wont see you until tomorrow! Sure enough I received a text from them at 8 am, we are on the roof top having breakfast, come and join us. I laughed, as India will always be so laid back. I was really happy to finally catch up with them, as I was extremely interested in their purchase of a Royal Enfield in Pondicherry. We actually ended up spending the day together visiting the sights I hadn’t already seen yet. 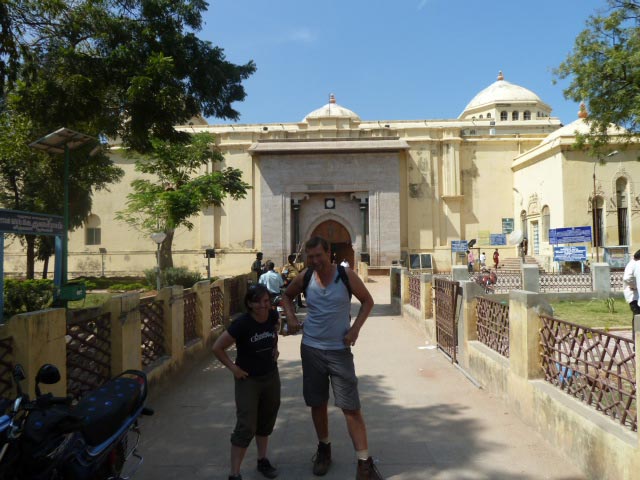 We paid money to view this public building, the best thing I saw inside was the two massive wasp hives hanging from the ceiling! 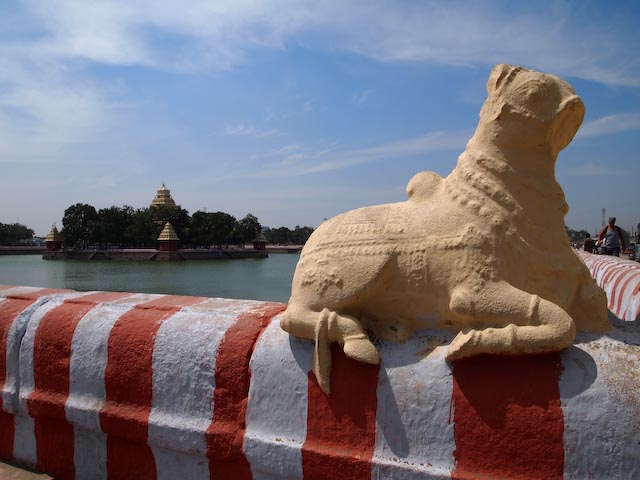 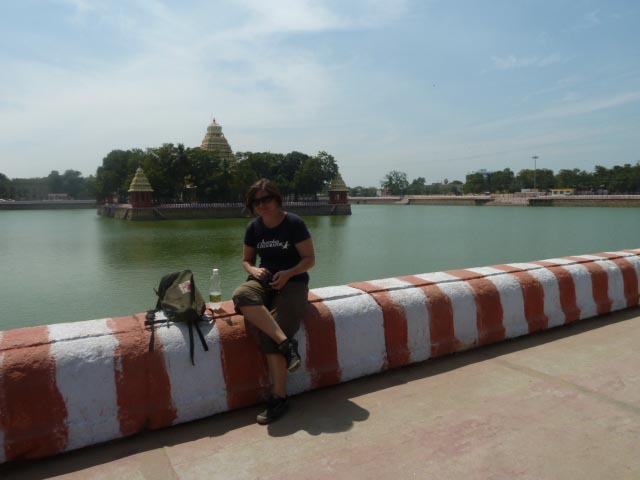 A huge water tank, with another temple floating inside. We actually thought we would be able to walk to the temple but apparently you have to take a boat. 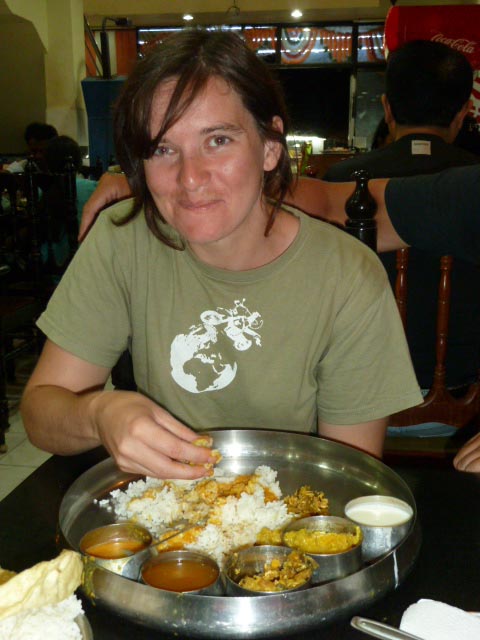 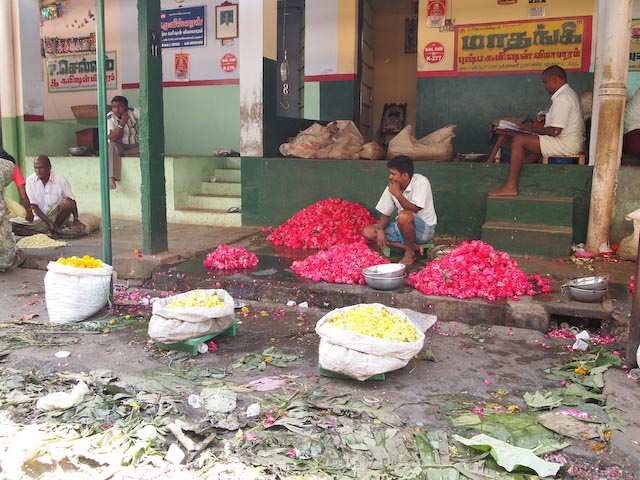 The flower market was wrapping up for the day, but it was still amazing to see the amount of flowers the locals brought purely for their religion. 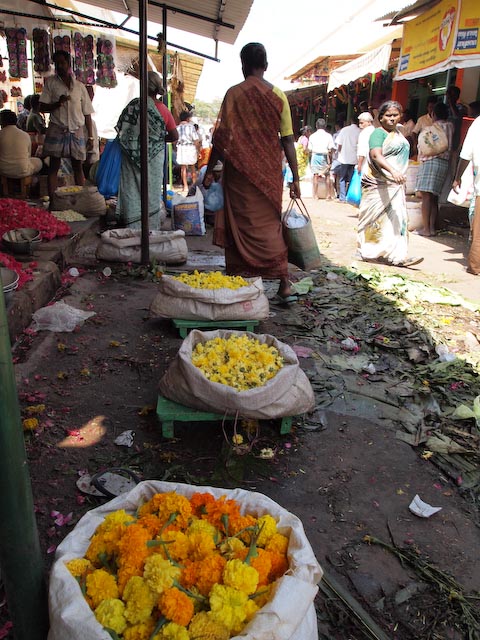 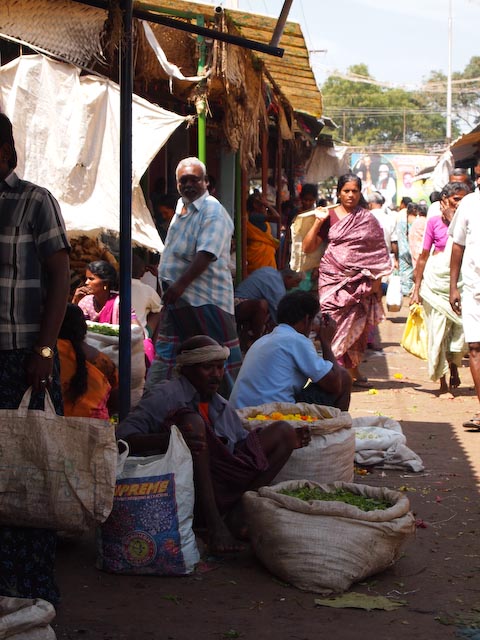 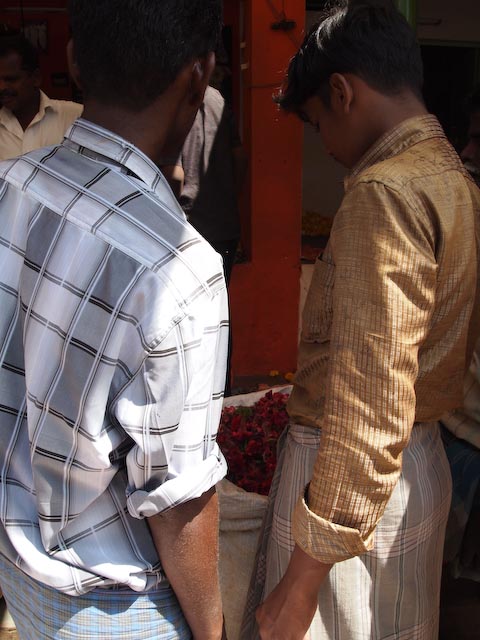 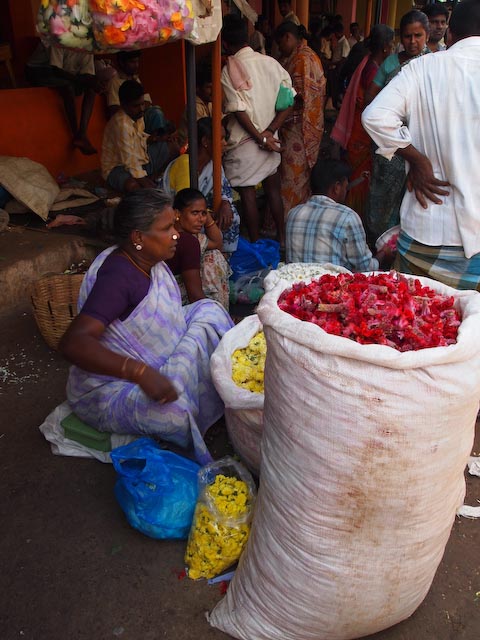 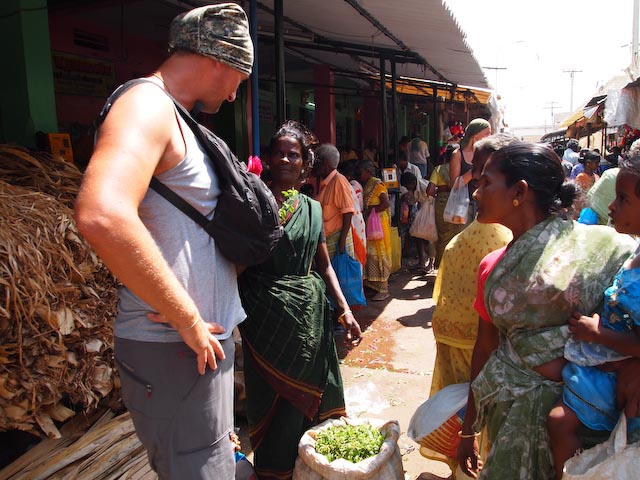 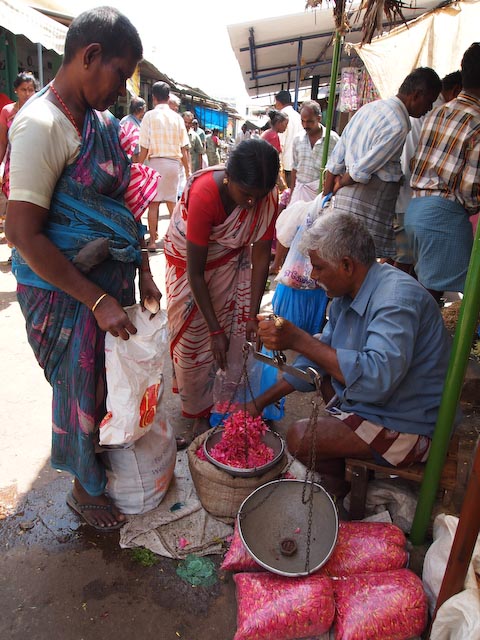 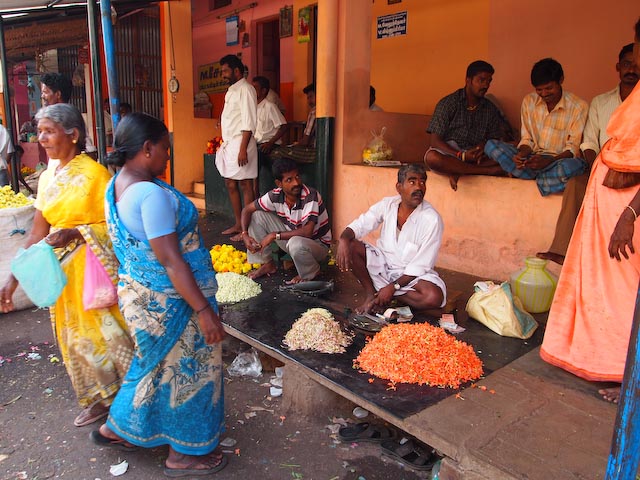 I had to get out of this city, I was starting to feel a bit over large cities. Looking in my guide book, I found a small town called Rameswaram on the spit of India the closest point to Sri Lanka as physically possible. I packed that night, for a quick early morning get away. I am pretty sure as soon as I am out of this large city the better I will feel again. Once I had my bags more or less packed, I headed out to find some late dinner.

Wandering down brightly lit streets, it was 8 pm but all the shops were open, people were shopping or eating. Turning down onto the slightly smaller streets I found the food stalls, there was one I haven’t seen before. A man and his wife selling deep fried fish and chicken. I couldn’t believe my eyes, I hadn’t eaten meat in ages, but I was still a bit cautious so I chose the fish. Standing behind the shop, with the other customers, I waited for my fish to be cooked. One Indian customer started talking to me in English. They were nice men on holiday with the entire family, but it was the men out having dinner. I had to guess that the woman were eating in the hotel, which I found odd but didn’t much of it.

Early the next day I ate my breakfast on the street, at the same street stall for the third time in a row. They finally recognised me and welcomed me in for breakfast, with a long head wobble. A man, with no teeth smoking a joint walks up to me and starts chatting. The rest of them stand around and laughing at him because of his lack of teeth. Laughing along with the locals, I felt for the first time, that they are not trying to come on to me, or sell me something but it was just pure friendship. It’s a feeling I don’t get very often here in India.

Riding along a nice shady, quieter road than the state highway I had encountered a few days before hand, my thoughts drifted back to this mornings feelings. India is the first country that I’ve visited, where I felt like I am second guessing everyone’s intentions. It actually changing how I behave when interacting with the locals. I’ve gone from a laid back, take it as it comes, trusting person to a tense, worried, defensive person. A person I am scared of as I wonder how long it will last.

The motorcycle holds a point of difference with the locals, as it does everywhere in the world. But here, they see me as a person exploring the world, someone who’s willing to try and see different things. They are often completely stunned and stop in their tracks to stare, moving only to poke their friends in the ribs to get their attention. I enjoy watching their reactions, as I recognise that I am treated completely different once I am removed from the motorcycle dressed as a normal traveller in the towns and cities and therefore act like a completely different person. Someone constantly on display, with at least five pairs of eyes steering trying to all get my attention at once.