I left Colin and Daphne behind in Kolvam as their bike needed a new fork seals and a few other minor repairs, I headed off to my next destination. I was lucky as I had meet another Dutch couple who travelled in India every year for four months at a time , on their Royal Enfield. They were able to tell me that if I follow the state highway north to Alleppey, I was going to be driven mad with the amount of traffic. Therefore I should turn off and ride on the smaller road that runs parallel with it. Taking note of their suggestion, I left but I was unsure how I was going to get onto this road. 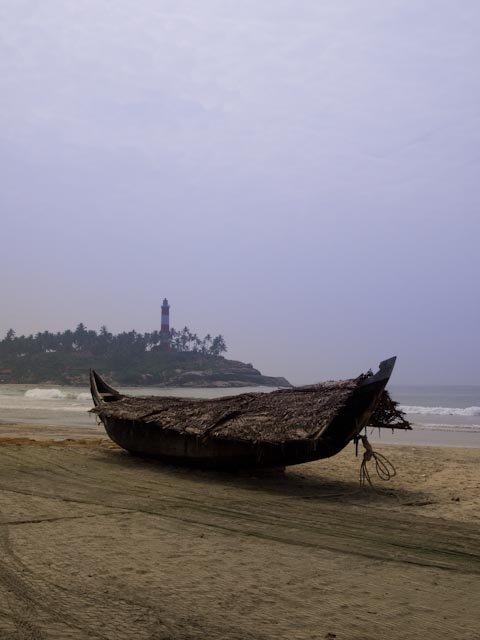 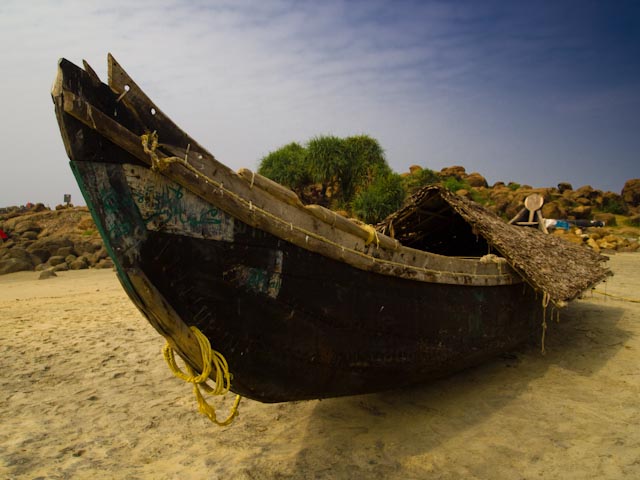 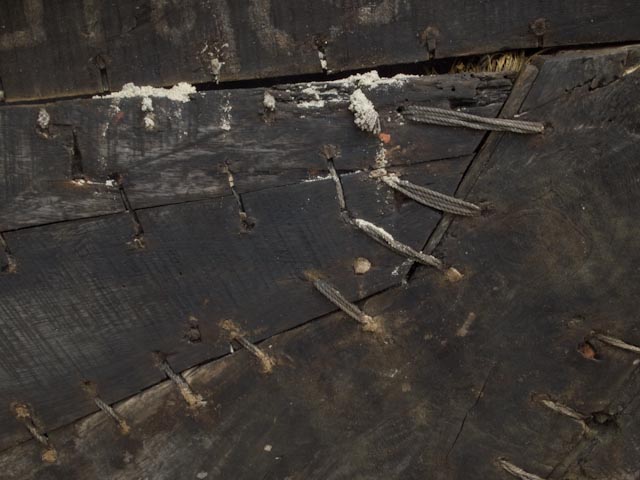 On a closer look the boats panels are stitched together

Sure enough I was stuck in hectic, unpredictable traffic that stopped a lot. Within minutes I was hot and bothered. I then saw a brand new intersection, with a massive sign pointing down there. I had no idea where that town was, but it was pointing in the direction of the quieter road I had been told about. I double backed and turned down it. I was alone on this wide newly paved road. Sweeping past the odd truck or bus, I felt myself cheering up. But it still was nothing like the amazing day before.

I followed the road for ages, watching the sun’s shadows to see which direction I was heading in. Itseemed to me I was heading in the right direction and could have possibly ended up on the right road! A name of a township matched my map and I could finally confirm this indeed was the right road. But I think this road has since been developed since the last time the Dutch couple drove down it, at least there wasn’t heaps of traffic.

Several hours later, I turned off and followed a small road that links back up to the main highway just south of my destination for that day. As I rode along this road, I had local families in saloon cars slow to match my speed, winding their windows down to take photographs of me. All smiling and giving me the thumbs up before leaving me in their dusty wake.

I was passing amazing canals, some larger than others. The smaller ones were over grown with lotus plants. I could see men dressed only in a sarong, pushing their long sleek brown boat down the canal only using a stick. On the larger canals, I saw large houseboats either tied to the dock or in full steam. These houseboats were constructed from timber but have a woven palm leaf thrown over to create shade on one of the balconies. I’ve always wanted to live in/on a boat, these are like floating mansions. 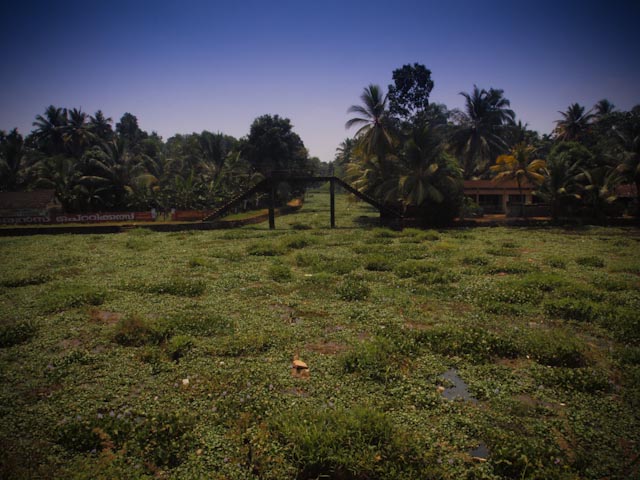 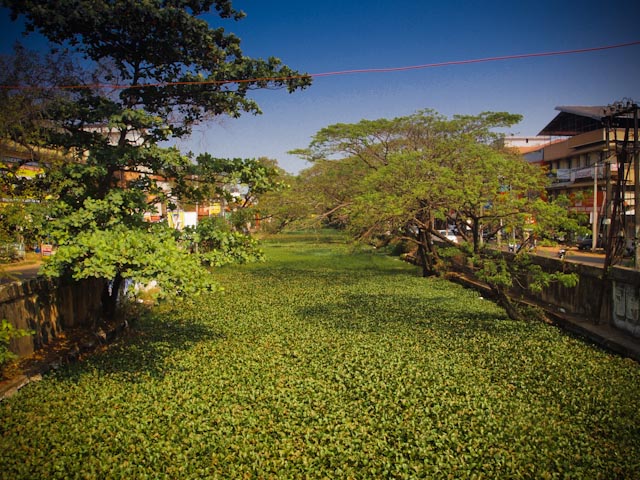 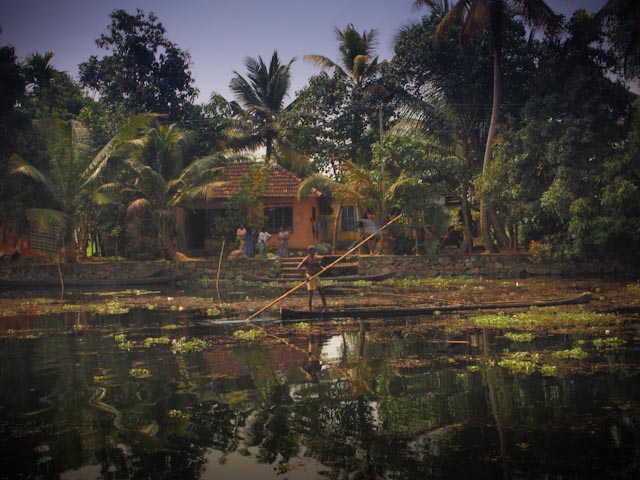 When I arrived into the township, I found the cheapest guest house to date (in India) at 125 IPR ($2.70 AUS). The only down side was I had to park the bike on the street, without any security fence. My room was really nice, its was just a simple plain concrete room and for this price included an ensuite, which smelt like sewerage (I think they do not design air traps within their sewerage pipes which prevents this from happening in our own homes). That night, I couldn’t help waking at every yell or bang that came from the street. I wasn’t able to check on my bike as it was under a huge verandah, blocking my view from the balcony above.

I had to decided if I was going to go on one of these boat trips. It was expensive, for twenty-four hours of floating time including all meals it was going to cost me over $100 AUS. For me this was the equivalent of four days of travelling. I couldn’t justify it, and that day I decided to leave.

I had another worry appearing in front of me. I knew I was going to have to deal with it sooner or later, so with me being me, I tried to sort most of it out right then and there. I rang the Pakistan Embassy in New Delhi and ask directly if they are issuing visa for foreigners. The answer was no, only for Indians.  This matched the information I had received through the internet. I asked about a shorter transit visa and they had no idea what I was talking about, therefore I hung the phone up with a sinking feeling.

I had two other back up plans. First one was to contact the Pakistan Embassy in Australia and the second was to ship my bike around Pakistan. As you can imagine, I wasn’t very happy about the second option, it’s not what I had planned and it was quite a costly exercise. But if forced to I will do it.

I rang the Embassy in Australia and they told me I could get a visa through them, it takes around a week. Excited, I explained the whole circumstances – I am in India, I am a New Zealander and my friend Melanie will be sending you my passport on my behalf. This was all fine, except for the issue I wasn’t Australian. You need to attach a copy of your residency visa or apply in New Zealand. New Zealanders do not require a residency visa or anything, the embassy should know this! I also didn’t want to apply in New Zealand, as I don’t have any bank accounts or a return address in New Zealand. They finally saw my point and asked if I can attach anything that will prove I am a resident of Australia, which of course I could supply, bank accounts, drivers licence and medicare card. With that problem solved, I was happy.

I decided to jump past the capital of Kerala, instead travelled further north via the same quiet road I took the day before completely bypassing the city. I ended up in a small town called Thrissur. A small town with a central temple. The wooden gate house had amazing details and I was really interested in entering the temple but was turned away because I wasn’t a Hindu. 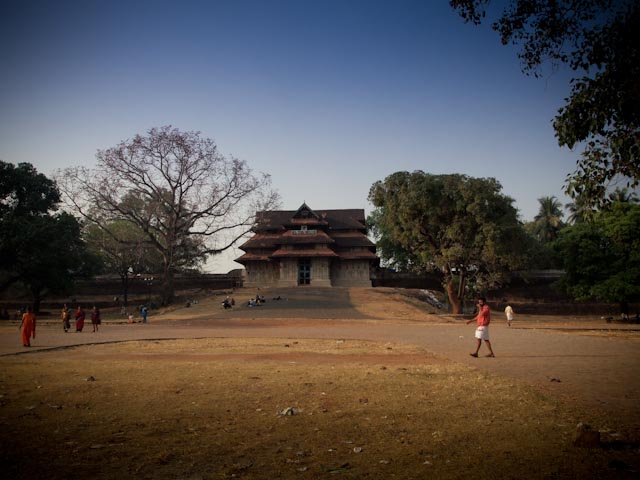 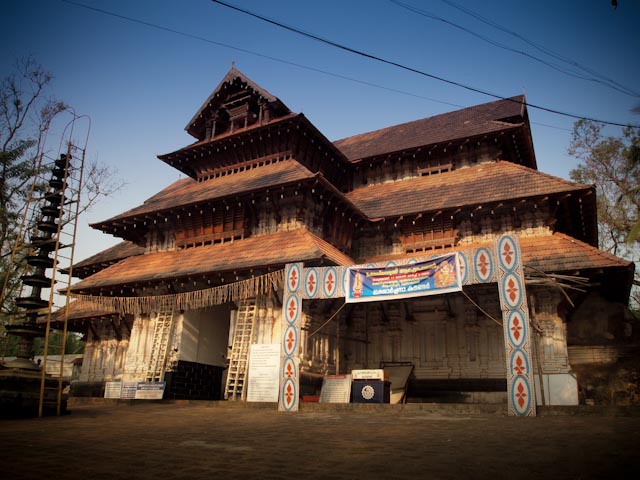 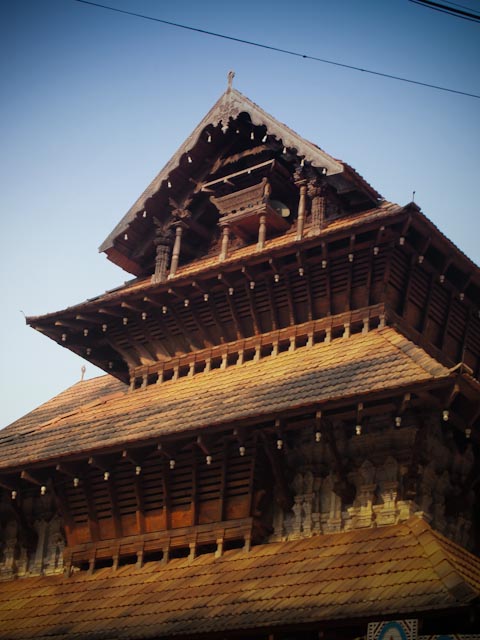 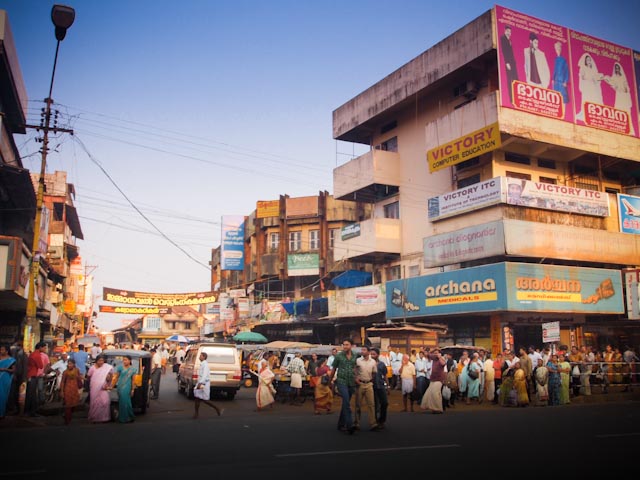 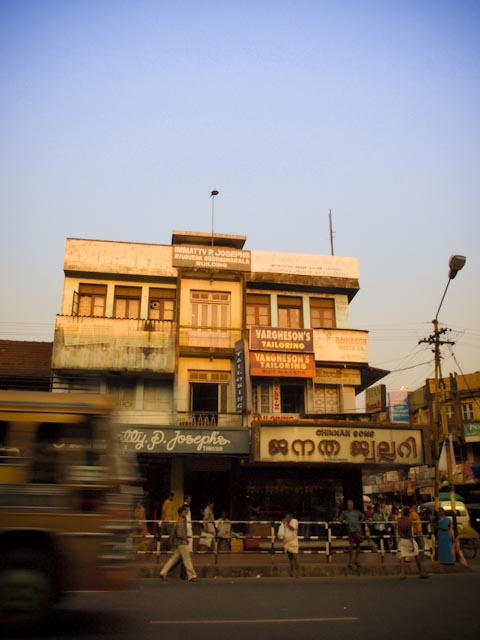 My room I got for the night was on the fifth floor. While taking the elevator up, another tourist stepped into the lift. ‘Oh my, another white person! Its been months since I’ve seen one’. I knew exactly how she felt even though two days ago I was at a beach full of them.

I’ve decided to move more quickly than I had been in Tamil Nadu, I was starting to worry about how long I was going to be without a passport, and had to find a place that would be perfect to bunker down in for a few weeks while I waited for it to be returned to me. Plus my Indian visa is only for three months, and I haven’t seen anything in the north yet!

Leaving Thrissur around 7am, after grabbing only a coffee as none of the food shops had opened. I will have to stop along the way. Today was going to be a long day, the kilometres were not great, it was the fact I will be heading back up into the cool mountains where you are forced to travel a lot slower.

Sure enough I arrive into Ooty around four in the afternoon. Despite the fact I have a town map ripped out of my guide book and stuffed into my tank bag map holder, I still got lost in the town and for ages could not find the town centre. When stopping to ask locals, they often (like us) get our left and rights mixed up, therefore I had to reverse their instructions and eventually, I found it and found a nice quiet guest house just out of the town centre with lockable motorcycle parking.

After four days of travelling quite quickly, I was a bit exhausted and spent the next day wandering around this cute small village with its rickety houses and narrow paths between. People raved about this town, but even though I was enjoying the cool air and a rest, I saw nothing to hold me here for any longer. Tomorrow I will move on again. 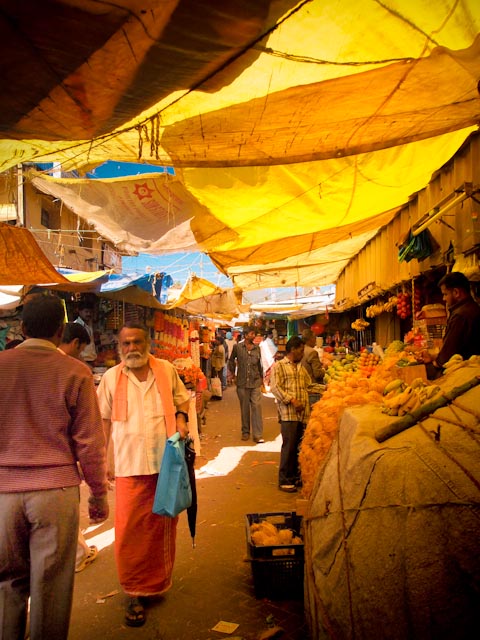 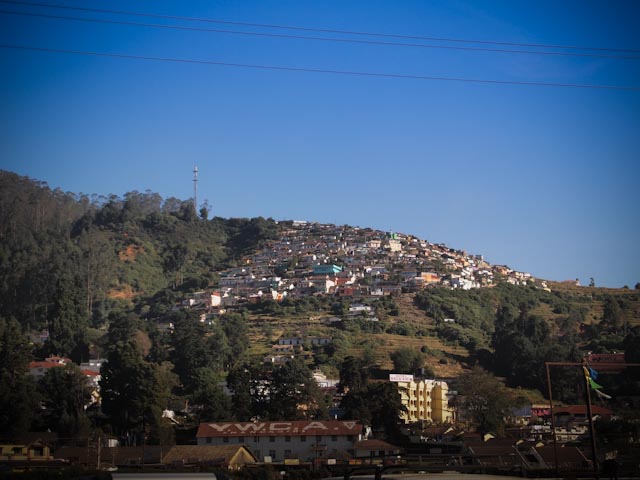 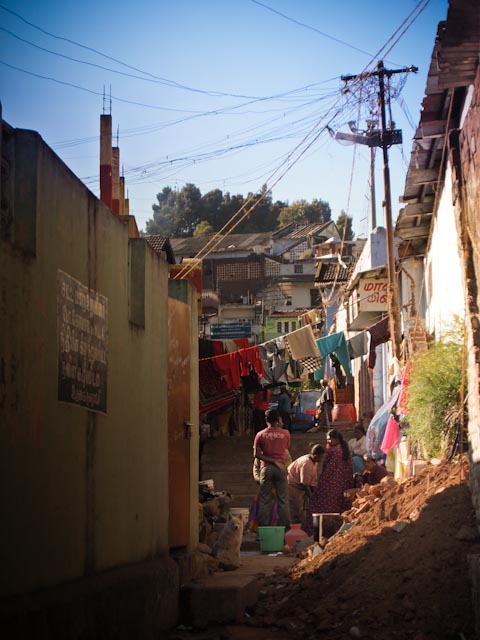 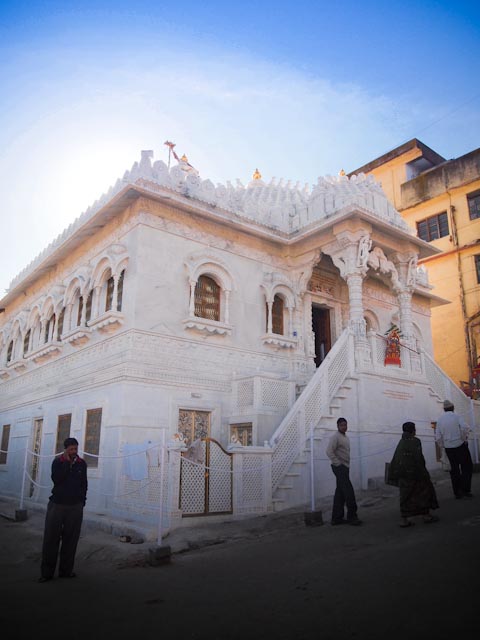 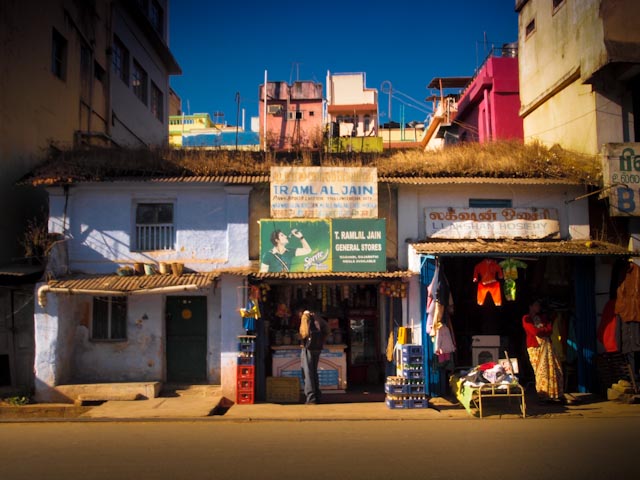 I loved the grass growing on the roofs 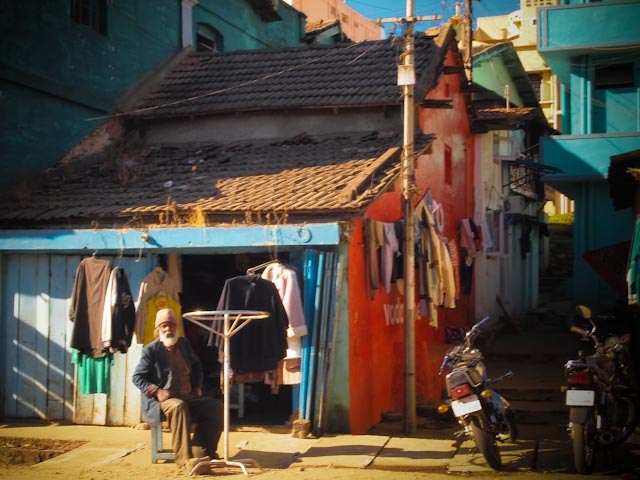 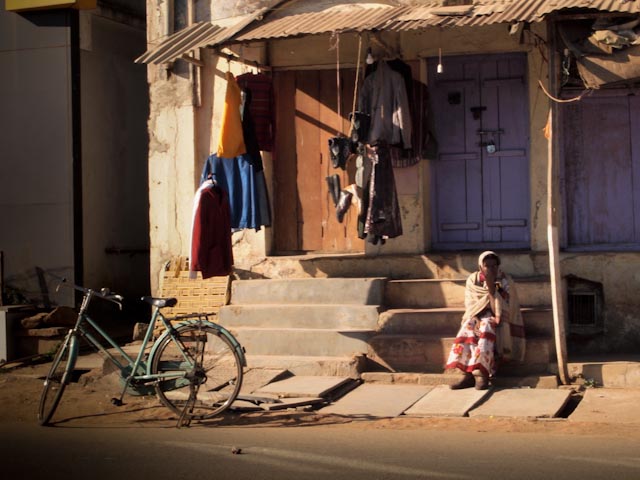 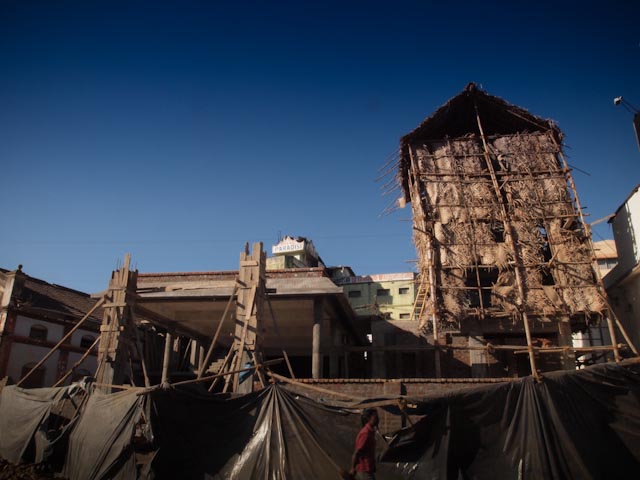 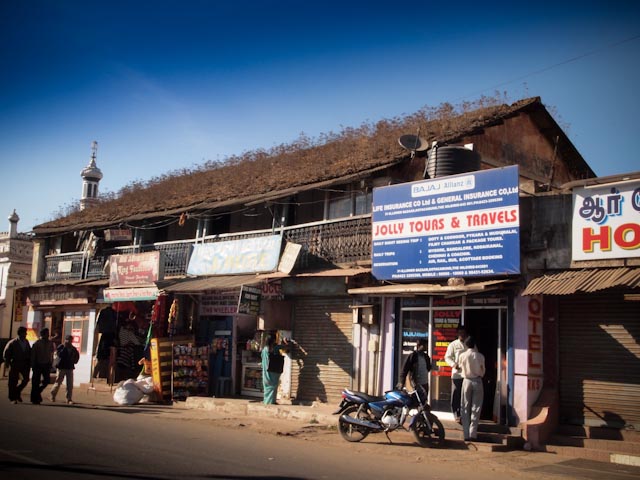 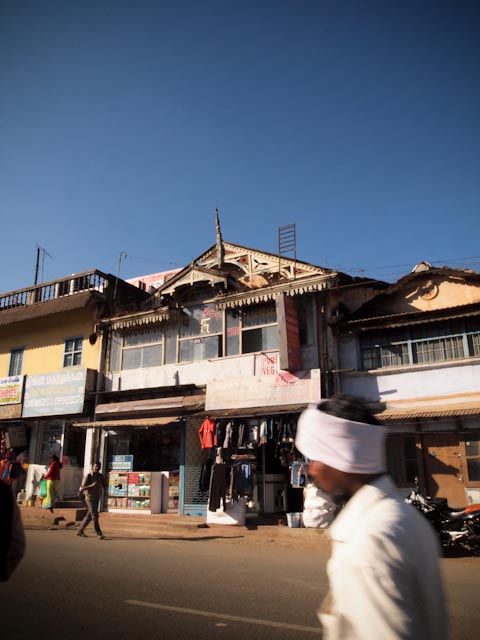 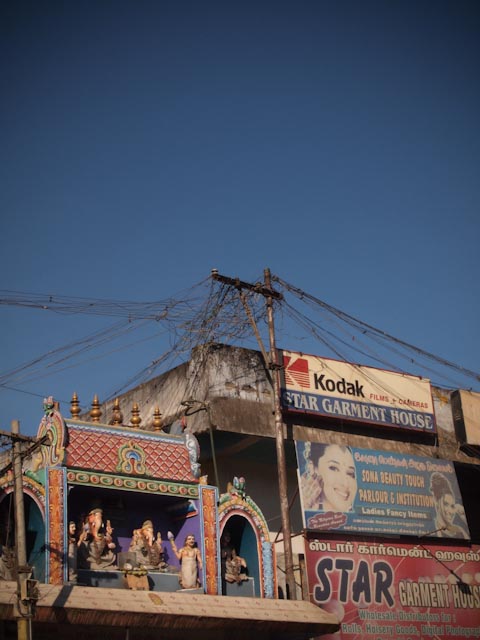