After the ceremony in Mamallapuram , I take it easy and pack my bags in true Indian custom, slowly but surly. I’m taking this extra day as I’ve learnt in the past never to rush, as things are meant to happen in its own time. I have a feeling something else is install for me.

Sooyria (Hawaiian Artist) invites Cole, Daphna and I to dinner at a popular tourist restaurant for my last night here in Mamallapuram Over dinner, Sooyria explains how much he wanted to meet me again after our first encounter. Asking why, he replies ‘I wanted to meet the girl who said to me the other night, I hope some day I have a story to tell, just like you have captivated all of us tonight. I couldn’t help wondering why this young girl said something like that, so I wanted to meet you again. What are you doing in India? I then explain to him, what I have done over the past three months and what I am attempting to do in the future. Sooyria is astounded. ‘I told you I needed to speak to you again, this is why, to meet such a young adventurous woman. Please let me have a look at your hands’ I slowly turn my hands over in my lap and look down trying to read what Sooyria might be reading. ‘I am not going to tell you what is written on your palm, if you come and visit me in Hawaii I will then tell you’. Slightly disappointed but completely understanding as we are at dinner. Sooyria, the kind soled man with no teeth wishes me luck in his own individual way ‘Danielle, I will meditate about you, and talk with my friends. They do not know who you are, but that does not matter, just remember I will meditate about you’. Pressing my palms together, in the traditional Hindu prayer position, I thank him for his good wishes.

Loading up my bike wasn’t the same as usual, I now had all my camping equipment back with me along with my new chain and sprockets. The bags were heavy and weigh my bike down lower than normal. I also had just spent three weeks in Sri Lanka on the Suzuki Djebel,where I could hardly touch the ground. Now fully loaded on my DR I can sit with one foot flat on the ground but only on one side! It felt different, but I’m sure it wont take long to get reconnected with my chariot.

I planned a short ride today, only a 120 kilometres to a French colonial town called Pondicherry. I just want to ease into the infamous Indian chaotic driving style I keep on hearing about. As I follow the main east coast road, I am riding in and around cows, goats, people, cars and trucks, other than that its fairly straight forward. I think to myself how lucky I am to start my Indian experience in the south. As I haven’t found any evidence of this yet. Before I knew it, I had arrive in Pondicherry.

Pulling over I look at my guide book and try to memorise the layout of the city and where the main guest houses are located. Climbing back onto my bike, I attempt to start my bike, for some reason it wouldn’t start. I can feel compression, the ignition is switched on and there is plenty of fuel. Hot and frustrated, I feel like I’m doing something wrong. Even though the bike didn’t throw me off, I check to see if the bike is out of gear. I repositioned it into neutral, at this point a couple of Indians pulled over asking if I am ok. I pushed one more time down on the kick, it fired. Now dripping in sweat I ride off in search of a place to sleep. Stopping several times to ask about rooms, I find them all full of ‘Collywood’ (Tamil Movie Industry) actors and production staff. This frustrates me further, as not only am I battling the heat in my motorcycle gear, every time I stop and turn the motorcycle off, it would take several attempts to start it again. Something is wrong, but I yet don’t know what it is.

Eventually I find a room in a beautiful old rusty red French pavilion just outside the main centre. Inside the house is dark, but has a nice airy feeling helped by the tall ceilings. The walls were clean but the paint showed a soft wear revealing layers of repaints. Every room had a green peeling double doors, that just made you reach out and touch them. Simple wooden furniture decorate the room, except the one canvas deck chair in the corner of the room. Odd plates, ceramic lamps and Pichya’s (Guest house owner) painting hang on the walls. 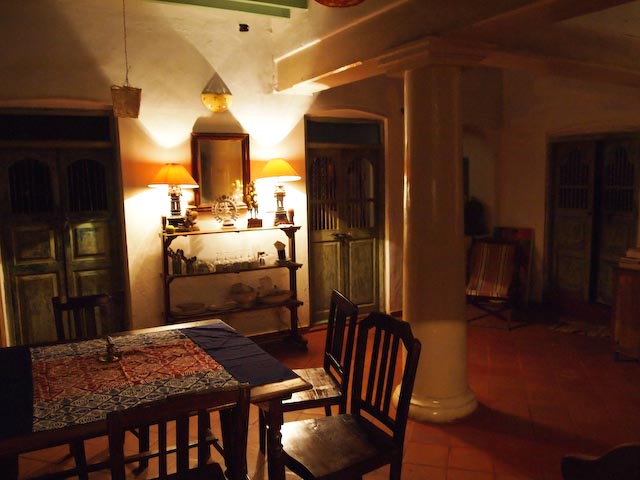 Only planing to stay one night just to visit the Pondicherry’s paper factory. Walking into the cool, shaded compound I was overcome with a sense that I’ve just entered into a special place. Its a pity everywhere signs hung the trees stating ‘no photography’. First I walk through the factory, watching everything from making pulp to dyeing and drying of the paper. Afterwards I walk back through the gallery and show rooms to view all the finished pieces of art work before leaving. 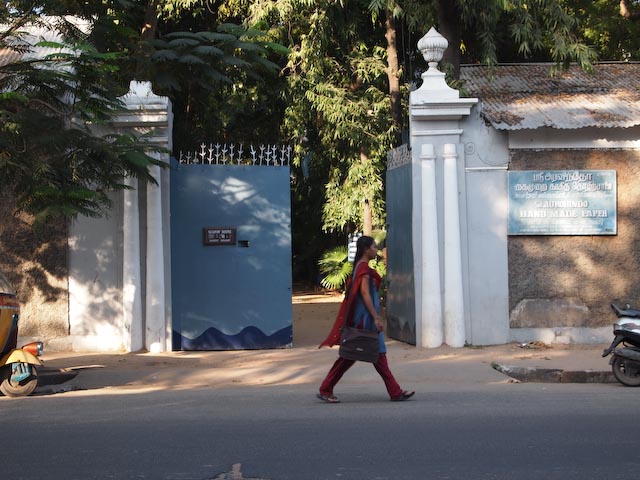 The only picture I was allowed to take of the paper factory. 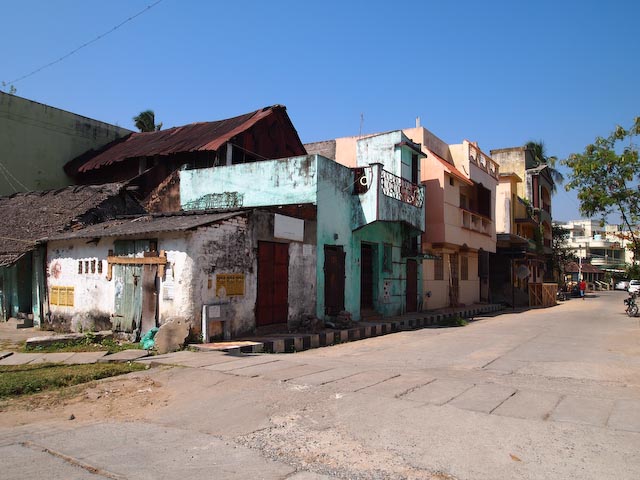 A common sight to Pondicherry 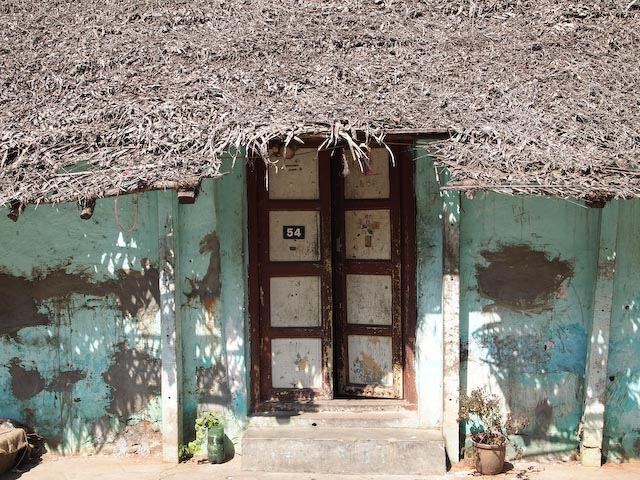 Before I head to bed that night, I park my motorcycle down the side of the house, half outside my window. I lock it and leaving my wooden window shutters open. Just when I was drifting off to sleep, I hear three men walking down the alley way. I quietly walk over to the window and watch the men gather around my bike, smoking a cigarette and chatting. I am completely alone as no one has come back from dinner yet and I have no idea what I will do if they decide to take it. Three men against one enraged woman? After ten long drawn out minutes, they walked back out to the road and take off on their scooters. Breathing in deeply, I spent the rest of the night half awake listening for other night visitors.

The sounds of honking horns wake me, with weary eyes I pack and load my bike. Pushing down on the kick starter, I feel compression, but I can not hear the spark ignite. I run through my the usual check, key on, fuel on, choke on and spark plug lead on? Everything was in place but still nothing I hear nothing. Pulling my spark plug out I notice that it had black dry carbon deposit on the end of the plug. I ruled out fuel mixture, so it must have something to do with ignition coils. Tracing the spark plug lead back to the coil, I find everything plugged in. I try again, nothing changed. I replace the spark plug with a new one, still it was not firing. Completely stumped I sat down to think it through once again.

Pichya (Guest house owner) call’s a mechanic, the mechanic confirmed my diagnostic. We have to take my bike back to his tiny workshop on the other side of town. Pushed me with one foot on my swing arm, he rides along beside me on his scooter back to his workshop. Dismantling all the coils ready for testing as today was Sunday and nothing was open until Monday. Monday rolled around pretty fast, sure enough the inside the engine the small pick up relay had decided to die. I’m not entirely sure how these things break, but we replaced it with one out of a local bike called a Honda Bajaj. It does the trick and now my motorcycle starts every time on the first pop. Thinking back to Indonesia, I remembered it was behaving and I realise that the bike was starting to show early symptoms of having a problem with starting. As each morning, if I didn’t get it started first pop, and keep it idling high until it warmed up, I would have to push start it to get it to start again. 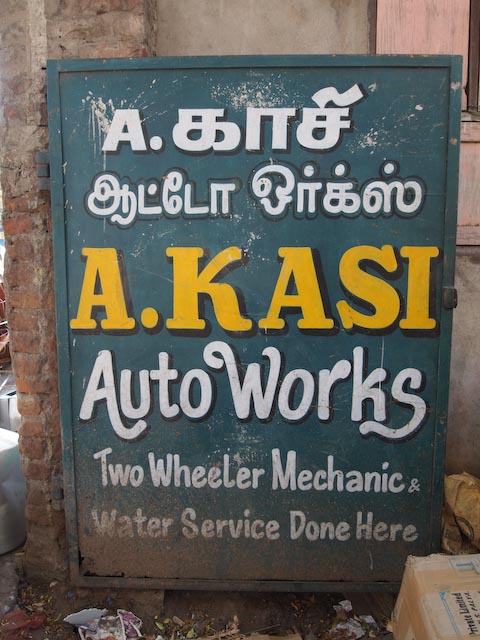 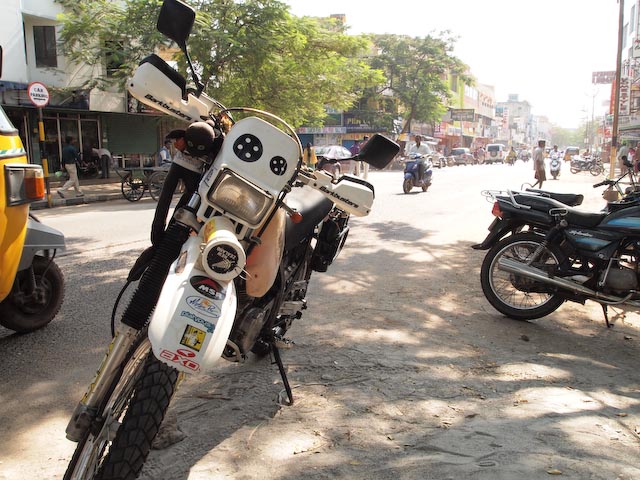 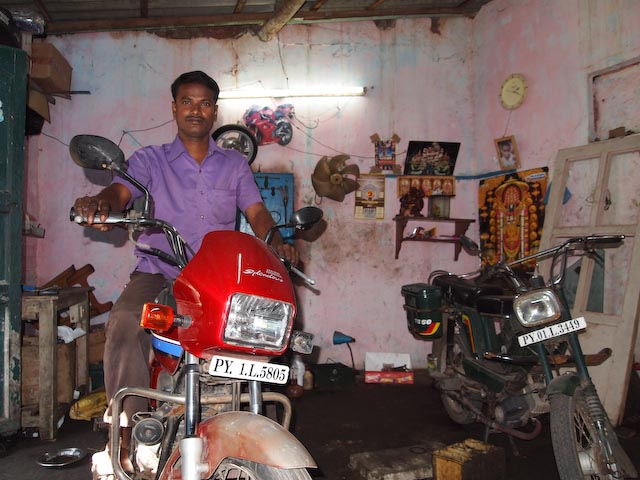 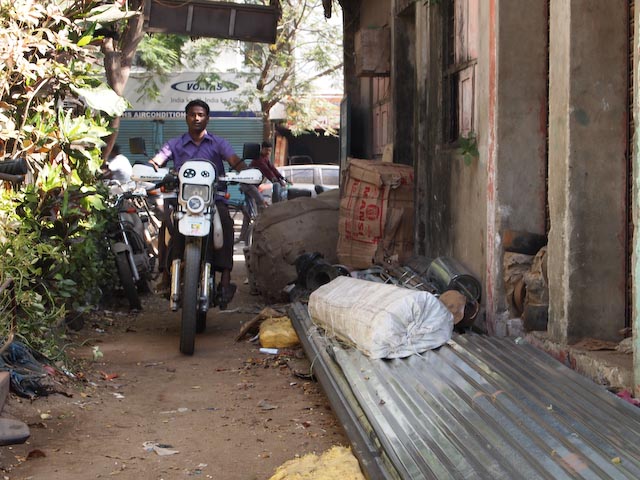 The mechanic took my motorcycle for a spin, he just loved how much

The feeling to hit the road was pretty strong, I needed to feel the elements as I sliced through them on my to another unknown area of India. I get to satisfy that urge after receiving a call from Peter Scott from Abc Gold Coast Radio. As I listen to the lead up to my interview, I didn’t feel scared at all. It just felt like it was a phone call between two friends, but in actual fact everyone across the nation and the world could be listening to my voice. The interview ended and I realised that I have indeed already changed, before this trip there was no doubt that I would not have been brave or capable enough to talk publicly without clamming up and becoming a shaking mess!

Leaving late, I find the temperature had already risen, I was sweating beneath my motorcycle gear. After 4 hours of riding, I arrived into a smallish town called Thanjavur. Exhausted from the concentration required to drive, I hope that this will become less energy expenditure as I get accustom to the Indian way of driving in this temperature. 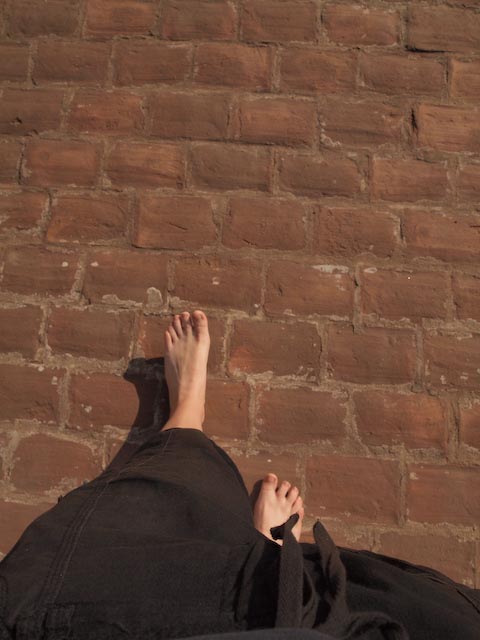 In Thajavur, there is a famous temple called Bruhadushwara. I tip toe barefooted over the baking stone in the morning sun. I am just in time to see men and woman rush to line up to receive their blessing. I join the queue of people and watch as the main doors open to the inner sanctuary. A murmur breaks out amongst the locals and they all surge forward. Caught up in the crowd I find myself been pushed and shoved forward until I am directly outside the main statue. Passing quickly I find myself spit outside through a side exit along with everyone else. 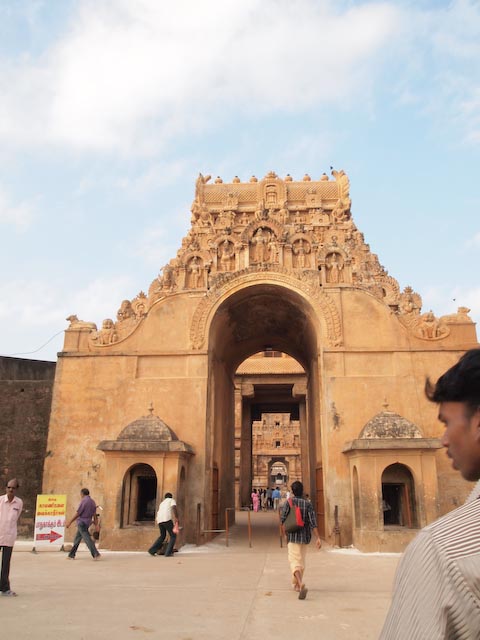 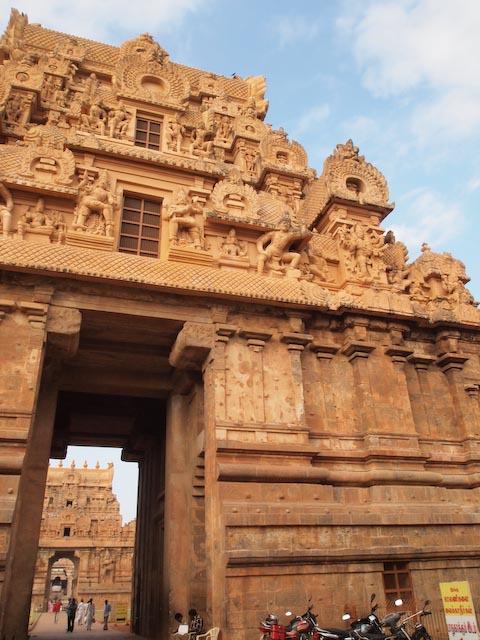 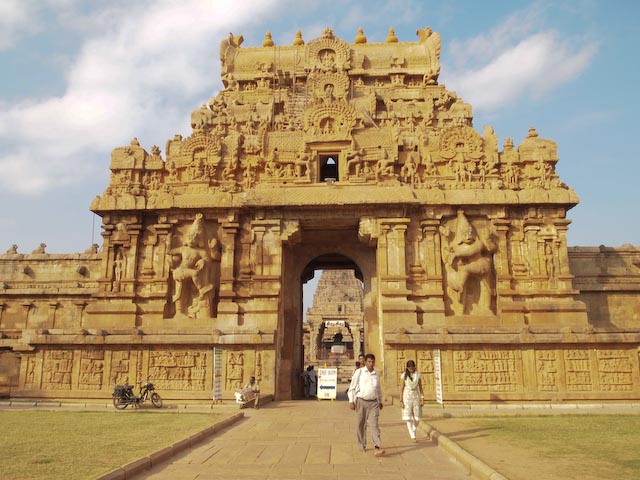 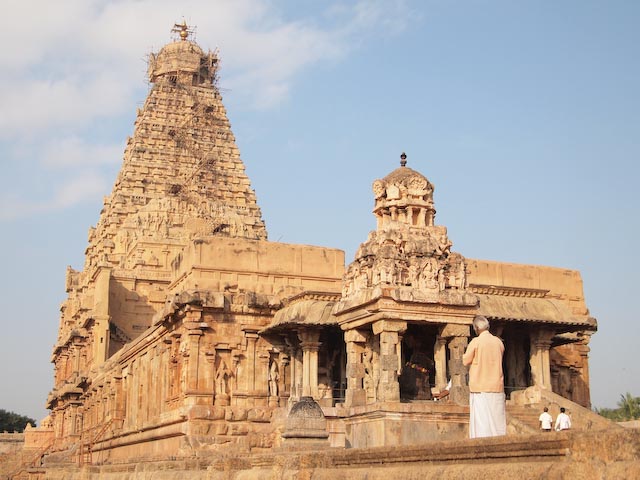 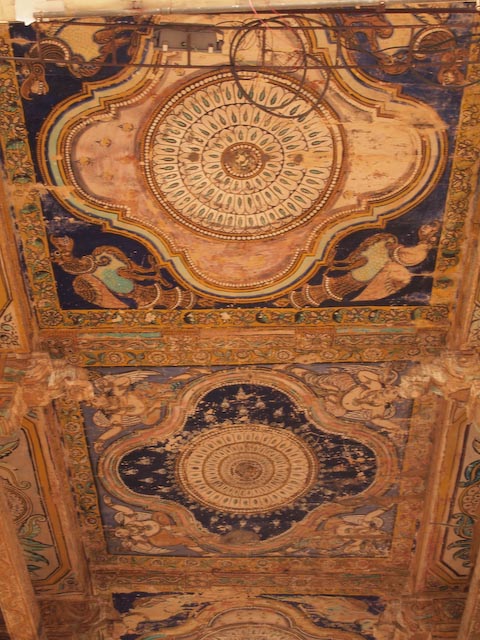 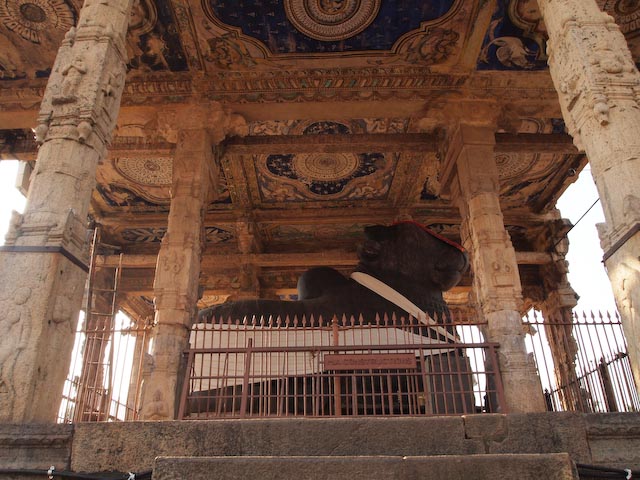 This is one of the largest stone carving in India 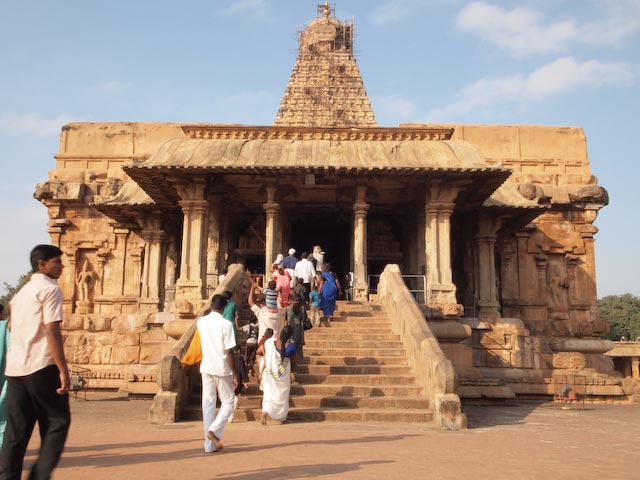 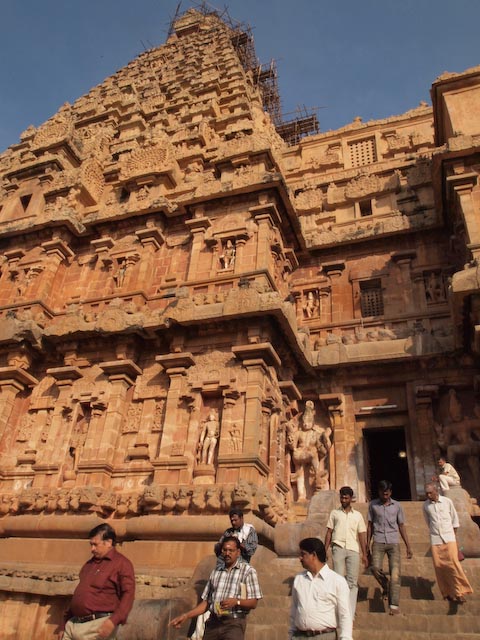 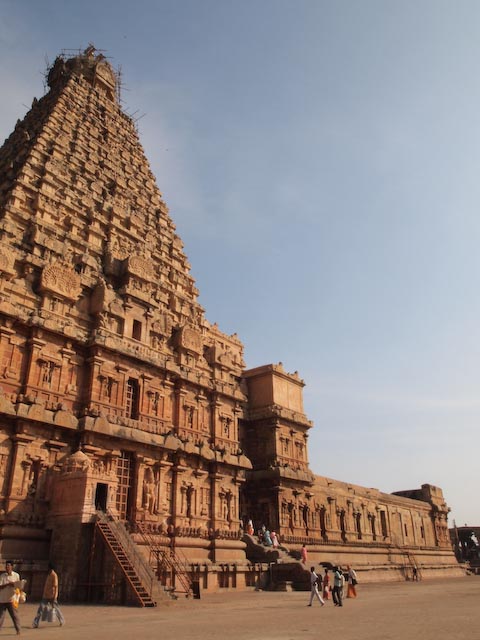 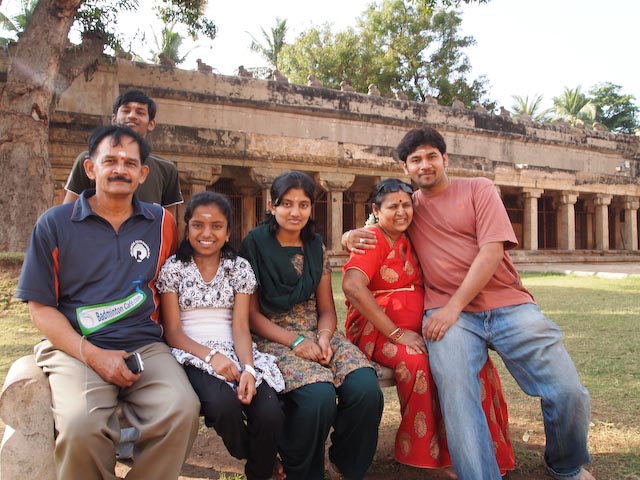 This family is on holiday from Bangalore, here just to visit the temple. 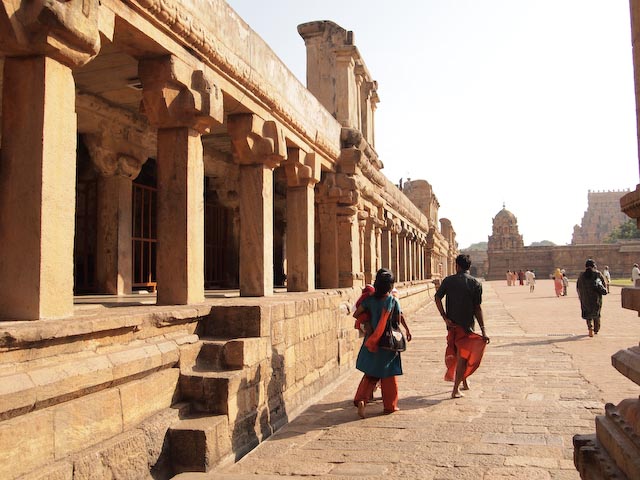 Its a pity to destroy such a peaceful start to the day with another round of heat, traffic, intense noise and tricky navigation but maybe this is what India has install for me. A mixture of peaceful solitude moments snatch away from the chaotic outer world beyond the temple walls. 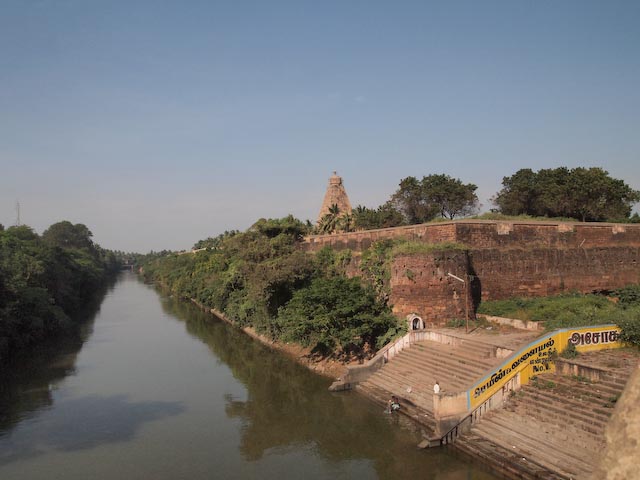