Long before we hit the outer city ring of Nairobi we were already crammed between hundreds of cars travelling at five kilometres per hour. This was going to be a killer for the bike. I could not only feel the temperature rising from under my motorcycle gear, I could feel the heat rising from beneath me. I wanted to look for a faster way through the traffic but I didn’t have the directions to the infamous Jungle Junction camp site plus I wasn’t on my own, I had to think about the two other motorcyclists.

Lane splitting and footpath riding works well when you’re on your own or only have one in tow. I remember back to when Frank (German overlander) and I drove into Indonesia. We also followed his GPS, but we worked as a team to inch forward in the tangled mess of the Jakarta traffic. I have a feeling this won’t work with these two guys. One might follow but the other would end up sitting back and waiting it out.  I couldn’t help but try a few simple traffic leaps.

Spotting a narrow dirt verge I took it to avoid sitting behind a bus bellowing charcoal coloured clouds heading straight for my helmet. Watching in my rear vision mirror, I see the other two following. This is good, despite their religious efforts to never ride on dirt again! Heaven ends and we are back in the queue of traffic, but this time behind a new 4×4. I needed another escape route.  I spotted one on the far side of all the traffic. The guys thought I was crazy, but I knew what the trick was. Crossing the Equator just north of Nairobi! I was forced to fly over the equator the first time, so for me this is an achievement and also feeling like I’m back in my part of the world again!Standing on my foot pegs, I make eye contact with each driver, mouthing “Jumbo Brother, Can I go in front of you?”  A massive smile breaks across their faces when they realise I’m a woman and then they nod vigorously. A few minutes later a path has been opened up for us and we jump to take the chance to inch not only forward but across the traffic.  We repeat this action until we are sitting next to the foot path, where I had seen a bus lane under construction. We followed a stream of traffic that already had the same idea as me. But something was wrong, the troublesome bike was becoming more and more stroppy.

We had already stopped a few times earlier that day to clean the sparkplug, but now this wasn’t even working. His bike was just backfiring all the time and it couldn’t just sit and idle anymore. The accelerator had to be constantly fondled. This was becoming a joke, with my bike starting to overheat and not being able to trust his bike to leave the safety of the footpath, just in case it broke down.  We re-grouped and decided this was rediculous. We all needed to get out of the traffic.

We forged a plan that meant we had to cross the river of cars and trucks once again. Performing my Moses trick, I got us cross to the centre, so we could take the first right that appeared. That first right never appeared. We shouldn’t have left the safety of that footpath. The wheezing bike stalled and wouldn’t start again. The Moses trick had to be performed for a third time, this time one bike was pushed back, but we had lost our safety net and had to park our bikes right outside a bristling second hand market.

With the bikes lined up tire to tire, without a gap in between, two of us stood staunch at either end of the line of bikes, watching all three and the luggage with eyes like eagles.  Nairobi has a second name amongst the travellers, Nai-robbery. This was a name I wasn’t hoping to experience. One of the guys ran off into the middle of the crawling traffic and flagged down any pickup truck passing by try to arrange a ride for the last ten kilometres to Jungle Junction.

I stood fascinated with the market proceeding around me. All the young local men trying to flatter me by attempting to sell me a pair of size 6 skinny jeans! You’re got to be crazy, I’ve never been that skinny! It wasn’t long before I was surrounded by the local women asking me questions about my travels, my country and of course my brother. When they found out he was in his early twenties, unmarried and had a job, they all asked me if they could marry him and move to New Zealand. I also had a few marriage proposals by  young cheeky guys, but  I sadly told them, they had better go and talk to both my husband’s over there, pointing to the two guys I was travelling with.  Two husbands! You could hear the murmur travel down the market street, over the roar of the traffic.

Thanks guys, for pretending I’m your wife! I know it’s unfair to lie to people, but you do get kind of tired of the same questions. After awhile, you start to change your story and make things up just for a giggle during helmet time. I don’t think I’ve ever lied as much in my entire life. I’ve even started to surprise myself with what I can pull from thin air when I’m under pressure. This wasn’t one of those times but I did want to be left alone, and I was getting tired of explaining that marriage doesn’t mean you can live in New Zealand.

I had upper class women speaking perfect English, young girls studying,  one who worked in the market selling clothing and accessories and a couple of street cleaners with a bag of rubbish over their shoulders, all approach me. I was in my element, this is what I hope to achieve when travelling. Travelling was changing for me, it had been since Pakistan, but I hadn’t fully realised it until now. It’s nice to visit the world wonders like the Pyramids of Giza but it’s more magical and full filling meeting the people living their daily lives. I was so caught up in talking to the local women I hardly noticed that the wheezing bike was loaded onto a pickup truck and was ready to take us to Jungle Junction.

With the help of the guard from the apartments next door, we found a gate set back off the street with only a monkey spray painted on the metal gates. Tooting, we were greeted by the campsites’ guard and welcomed in. After parking my bike, I looked around and was overwhelmed with the amount of trucks, 4×4’s and motorcycles parked there. One small group of overlanders were enjoying a beer outside their landrover. Approaching them, I asked if they could give us a hand to get the bike off the pickup.

Tired, worn out, but happy to have finally reached Jungle Junction in Nairobi! A slice of paradise, a place to get up-to-date information about the route south to Cape Town,  a place to fix your vehicles, a place to rest, a place to use the internet once again but more importantly a city to shop in. Nairobi is the first developed city I have been to since Turkey. I knew I was going to enjoy just going to a supermarket and choosing what kind of shampoo I want, instead of being forced to take anything available. 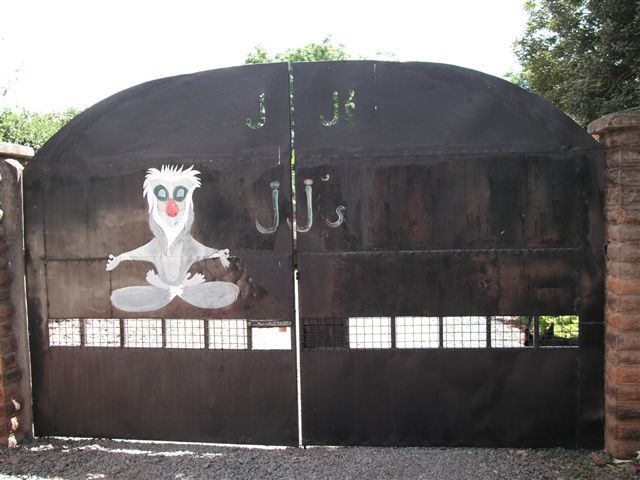 Jungle Junctions Main Gates – Now you know why you can not find it too easily in the dark and you would have no hope without a GPS!