Back in Gilgit, lying in bed, looking about me, seeing local carpets hanging from every wall, still groggy from listening to Michael talk on the phone and repeatedly start his bike up all through the night, I remember I am still in Gilgit. I rolled over not caring if I woke Michael up or not, I just blurted out ‘Even if you get your bike fixed this morning, I’m not leaving today.’

Despite not been able to cross Shandur Pass, I was somehow happy we were back in Gilgit. I felt a sense of belonging and calm in this tiny town.  However the sinking feeling of returning to Islamabad with only accomplishing the gruelling Karakorum Highway was quite disappointing. 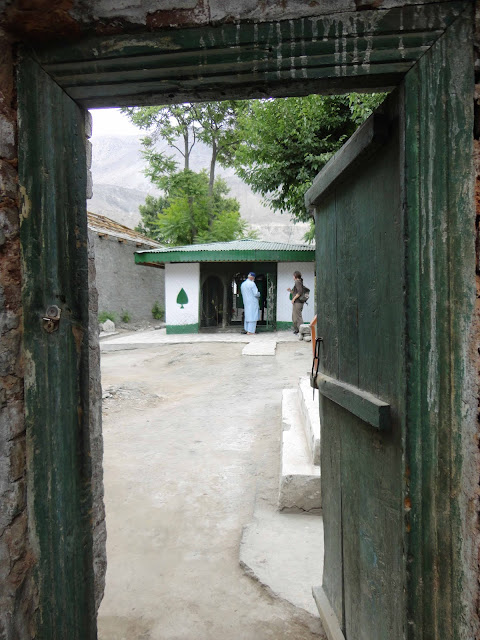 After visiting the massive Kargah Buddha caved into the flat stone cliff, with only a few signs of how they might have attempted to carve it in the seventh century, I stopped into a small store at the other end of the Bazzar with my Guest House owner Qayum.

As we sat on the thin bench sipping Chai from a chipped Chinese cup, Hungry Man (Joel from Sweden) stood in front of me with his bike in hand. It was really nice to see the young hungry cyclist once again. Loading up my motorcycle with his panniers he followed me through the streets back to Qayums paradise. 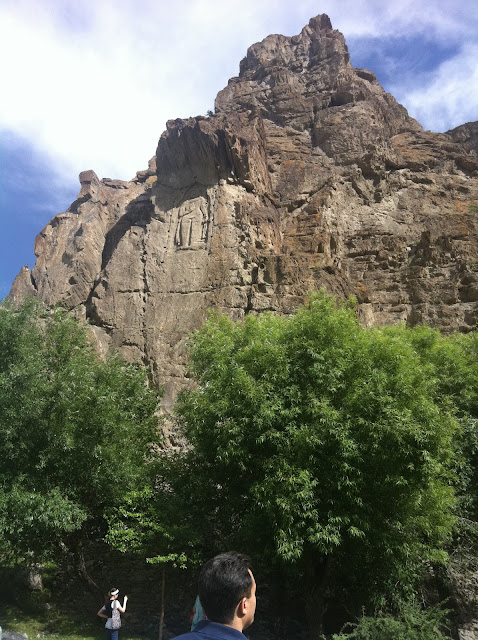 Michael’s bike was fixed but now he, himself was broken. When he went to the bazaar to find a can of WD-40, he dropped his bike in the sand just outside Qayum’s house, and pulled a ligament in his shoulder, which kept him cooped up in bed, tossing and turning at night and finally sleeping all day. 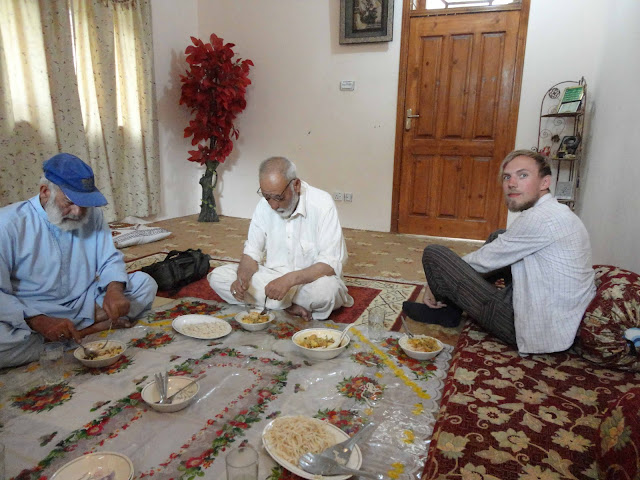 Qayum, Iqbal, Hungry Man (Joel) sitting in the guest room of Iqbal’s house
– Photo thanks to Joel
Qayum, Hungry Man and I were invited to Iqbal’s (the blood doctor) house for lunch. The women in the house cooked the most amazing ‘lakman’ (Chinese noodle dish)  I have ever tasted. Iqbal kept on serving us until we were stuffed full, but Hungry Man managed to polish off an entire serving plate full of Lakman. With his belly extruding from his skinny frame, even he then gave up eating. While the boys relaxed in the guest room, I was taken through to the family room to meet the women of the family.

When we entered a smaller family room, the warmth from four generations of women and children radiated from where they sat around the edges of the room on long skinny cushions. I couldn’t help feeling overwhelmed, as this was the first time I got to meet the women behind the scenes. Up until now, I only had manage to meet a small amount of women, mostly on holiday with their family or a few who had seen me around the town.

After noticing their curiosity I had extended my hand to them, which was gobbled up in pleasure to finally be able to connect with someone. For me to stand in that room surrounded by local women was a dream come true.  Luckily for me they spoke a bit of English, so we were able to ask the millions of questions all women have for each other.

I answered questions about my family, if I had a husband? Did I have children? Why wasn’t I married? Why didn’t I have children? Is something wrong with me? They couldn’t believe it, I was 30, and in their eyes I should have at least 3 children. Something must be wrong with me. I find it extremely hard to explain my culture, as they just don’t believe me when I tell them we tend to marry later and start having children in our thirties.

I used this opportunity to ask my questions too, they too were focused on marriage as I couldn’t quite get my head around arranged marriages, lack of contraception and joint families. It is really common to have two or three brothers at home with their wife’s and children, plus the mother and father and anyone else who wasn’t married yet.

When I was forced to leave, they presented me with a silver necklace with pieces of green stones and matching earrings. I felt so humble and embarrassed as I didn’t have a gift for them when they shared so much with me.

With Michaels shoulder still playing up and his bike not 100% I promised to wait around for him to be ready to head back down the Karakorum Highway. While the days slipped past easily, I never got bored I had so much to do. Today Qayum, Hungry Man, Yasir, Mimi (A strange 50 year old Korean lady hoping to marry a Pakistan man) and I piled into Qayum’s jeep and drove 15 kilometres to a small village called Naltar. 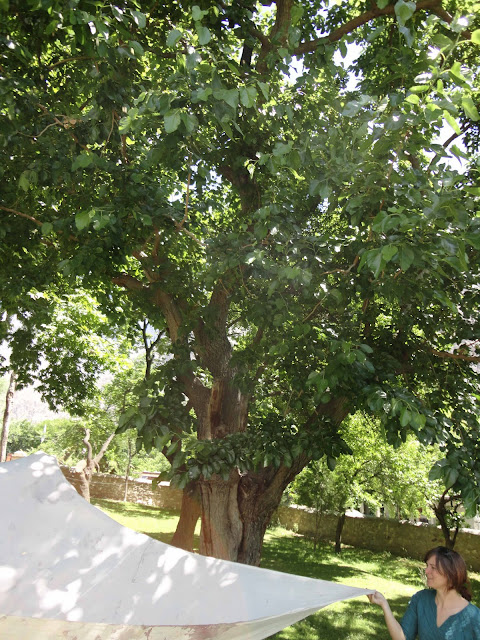 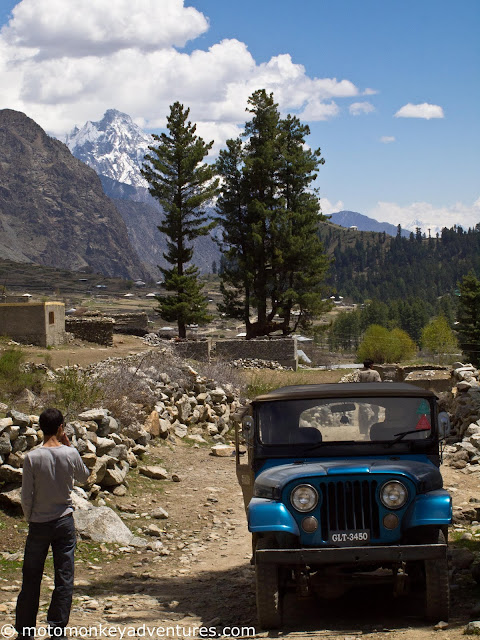 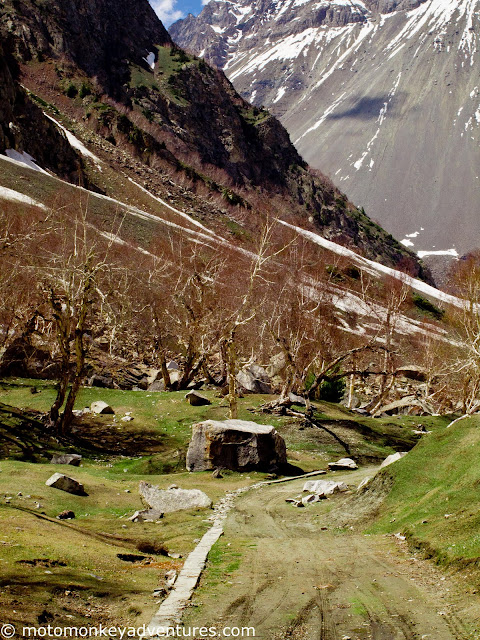 Every turn brought a beautiful view
Just past the simple but beautiful alpine village surrounded by pine trees and towering snowy mountains we arrived at the most spectacular lake I’ve ever seen. With the snow extending down trying hard to grasp onto the remaining cold valleys, young bud’s were starting to break out on the trees that lined the edges of the lake, the cool crisp air whipped past my skin as I shivered and I drank in the most intense greens, purples, blues and blacks immersing from the small but beautiful lake. 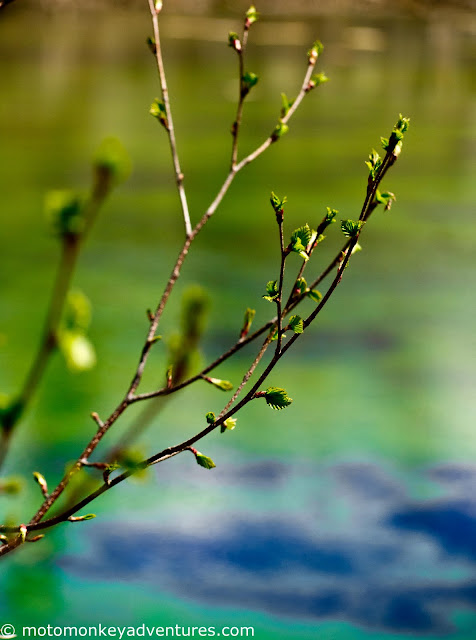 It was freezing but the spring buds were emerging 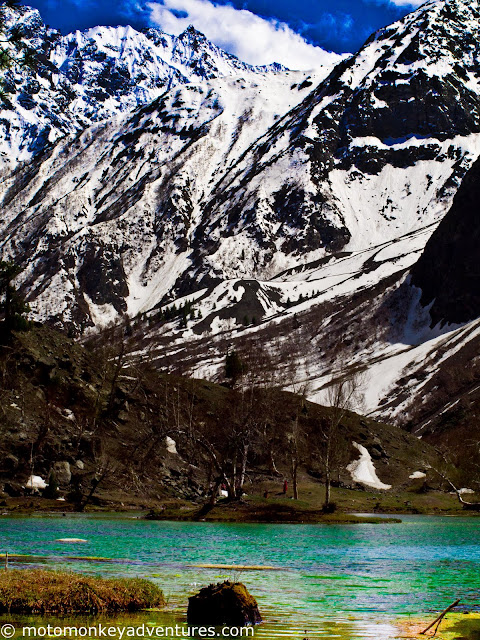 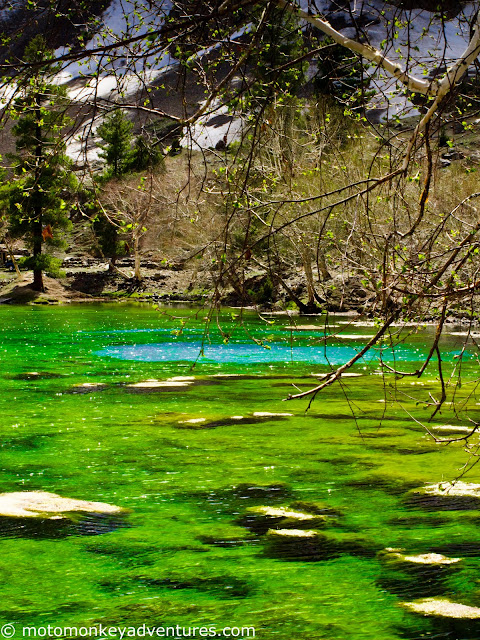 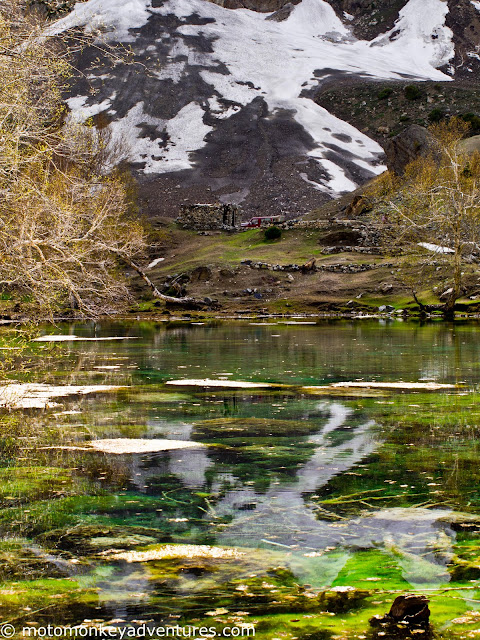 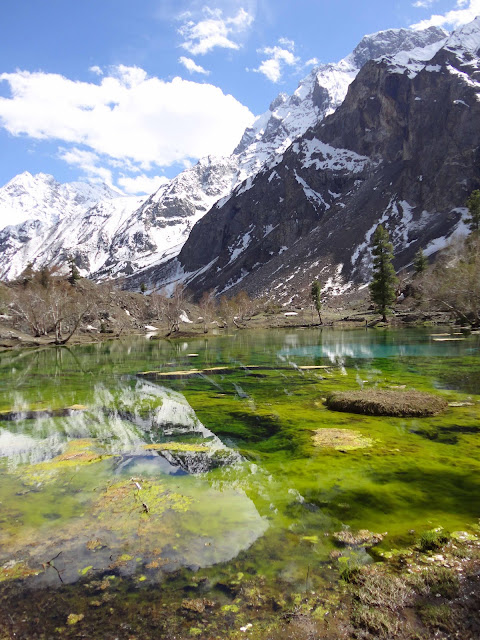 Naltar Lake
Photo thanks to Joel

With each of us carrying our share of the picnic, we walked up to the upper Naltar Lake, through knee deep snow drifts. We arrived at a disappointingly shallow lake, but Yasir dragged us deep into the boulders. Standing high above the lake on a boulder the size of a truck, I stared back down at what I first thought was a boring lake. Like the first lake, its main colour was clear blue, but in the middle forming a star fish shape was deep purple almost black cloud.

Sitting completely mesmerised, perched on the boulder with our legs dangling over the edge, we ate our tomato and cucumber sandwiches. After a quick bite to eat, I went for a walk up to a grassy patch. While waiting for Hungry Man to catch up with me I got a cold airy feeling, like someone was sneaking up on me.  Turning I would find no one, but I couldn’t shake the feeling.
‘You cannot camp here’
‘Why not?’ I asked looking around me, there was plenty of flat spaces, fire wood and water. I couldn’t see anything wrong.
‘People have reported shifting in the night’
I’m sorry, I’m not sure what you mean?’
‘They pitch their tents and go to sleep facing the lake, when they wake in the morning, they are in a completely different place, nowhere near where they originally pitched their tent’

If I was told this story before coming here, I wouldn’t have believed Yasir, but with the airy feeling still on the back of my neck, I don’t think even I could camp there. 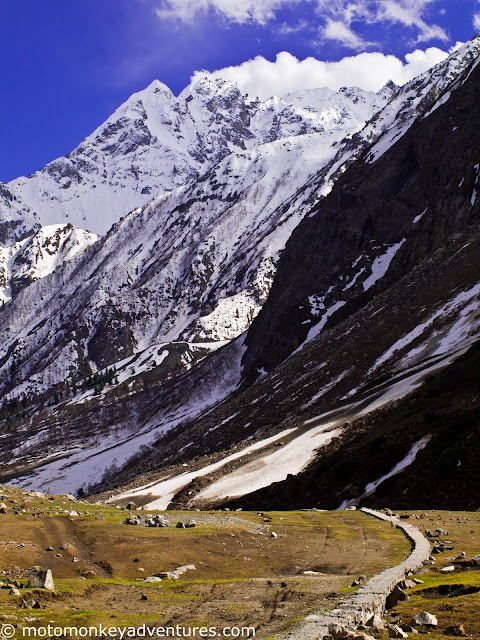 We are getting higher and higher! 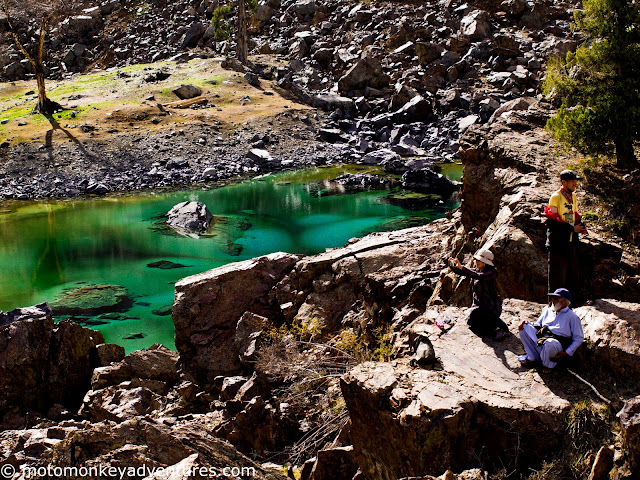 Upper Naltar Lake where we decided to sit for our picnic. 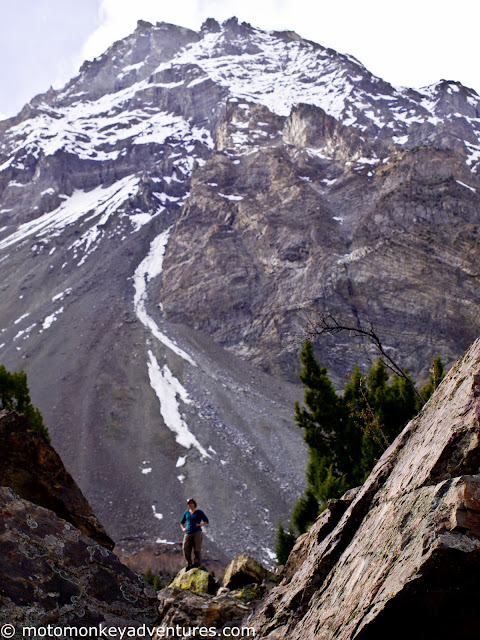 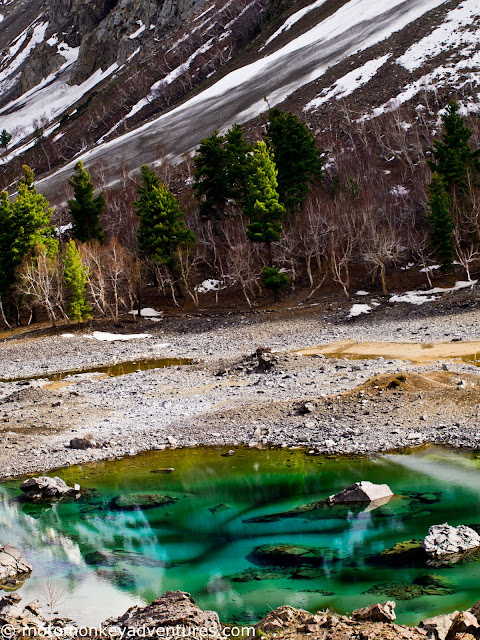 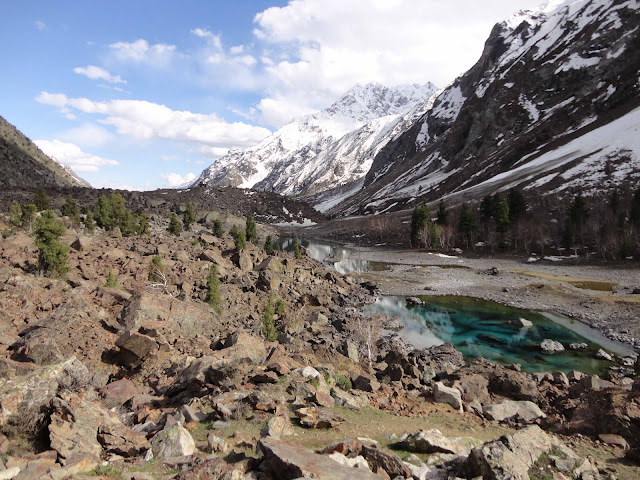 On the way back to Gilgit, I realised I was being watched through the rear vision mirror. No matter where I sat in the back, I couldn’t shake Qayums gaze. For the last few days he had started to say strange things to me. When we were feeding the stray puppies he had befriended, I had innocently said that the mother will miss the puppies when they had grown up. Qayum quietly said he wanted a baby – I looked at him oddly, not saying a word but wondering why he would say such a thing when he already a family. Eventually I decided to ignore the comment, putting it down to miscommunication.  But a few days later, we were discussing his extensions when he said we can make a room for us to sleep together! Stunned, I again just ignored the comment, but now his odd attention on me, who was the same age as his eldest son, was becoming apparent to me. I needed to get away for a few days and let things settle down. Since I’m still waiting for Michael to recover, I’ll head north to Hunza.