With my vision impaired with an oversize Pakistani ‘Anti-Terrorist Squad’ member sitting between Honey and Hungry Man on the 50’s jeep tool box and lucky for him, Honey Mans woollen shawl.  With a huge Kalashnikov laid across his lap,  the butt resting on Honey Man leg and the barrel on Hungry Man, it gave the three men sitting in the front seat a sense of power that they normally wouldn’t have.

Due to the proximity of Afghanistan, we were forced to take on at least one passenger. The Police Commissioner in Chitral wanted us to take another one, but where are we going to put him? The 50’s jeep could realistically only hold four max ! Therefore they settled for just one, the big guy in the middle. We re-named our guard the ‘Horn Man’, since the road through Bumburet Valley was as narrow as one vehicle, with a lot of turns.  Honey Man was too busy to press the horn button, so we had proper job for our guard do. 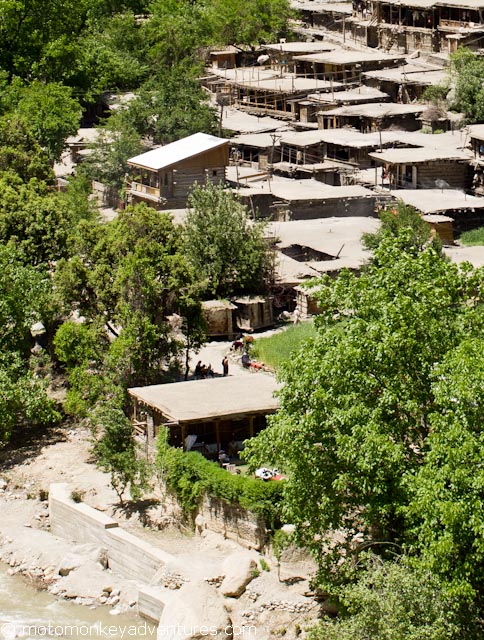 Driving into Bumburet Valley was like leaving Pakistan through an invisible border into another country. In fact we did actually have to pass a physical barrier, to have our passports and paperwork from Chitral checked and logged.
Not long after that, Hungry Man yelled ‘Bus, bus, bus!’ (Stop, stop, stop) and leapt out of the jeep with the Horn Man closely in tow, leaving the other three of us sitting in the jeep clueless. They returned to the jeep with Hungry Man looking sheepish as he explained he threw his passport out the window. Fortunately enough for him it didn’t fly down the steep bank and into the river, it just landed on the road. 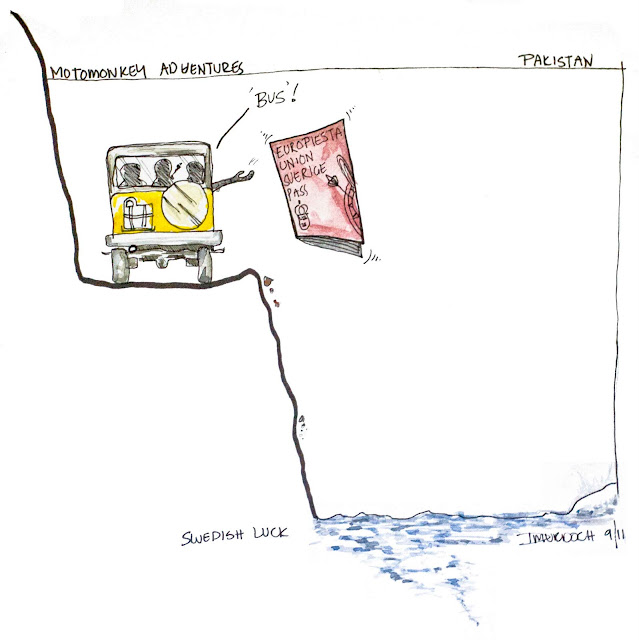 Climbing further up into the valley towards Afghanistan, I watched the culture change from the normal traditional Pakistani, which I’ve become accustom to, to seeing women active amongst the community. They were openly having conversations with other men, their hand shake represented how open they were. They would take each other’s hand and raise their hand and kiss the back of the hand. You would never see this in Gilgit unless you were shaking the hand of an old woman. 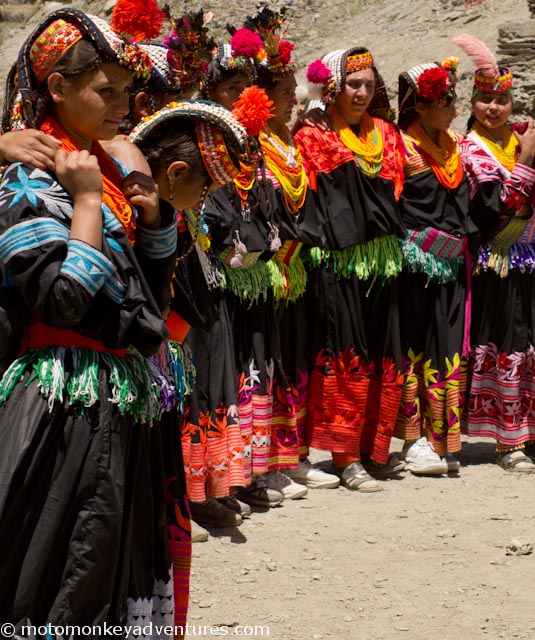 Standing side by side they shuffle sideways around the main singer

The women were no longer dressed in the tradition Pakistani dress ‘Salwar Kameez ‘ , but in black top and long black skirts. The hems of the skirts and the shoulders of the topswere heavily embroidered using a main colour of choice – blue, pink, red, orange or green. From there they would choose accent colours to help give the design punch.  A five meter woven woollen belt in matching colours was tied around the waist and long strings of orange, red, white and yellow beads piled around their necks. 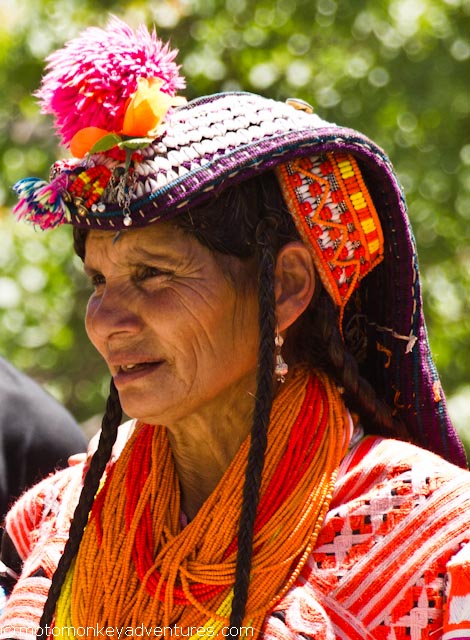 Before braiding their hair they dip their hair in oil to make it stay in place for longer.

To complete the outfit, on their heads sat two hats, one on top of the other. The first one is the normal every day circular band hat.  The second which they wear on top of the first one, is an elaborate Kupas, which is used for formal occasions and festivals, made up of over 1000 cowry shells, metal ornaments and beads. 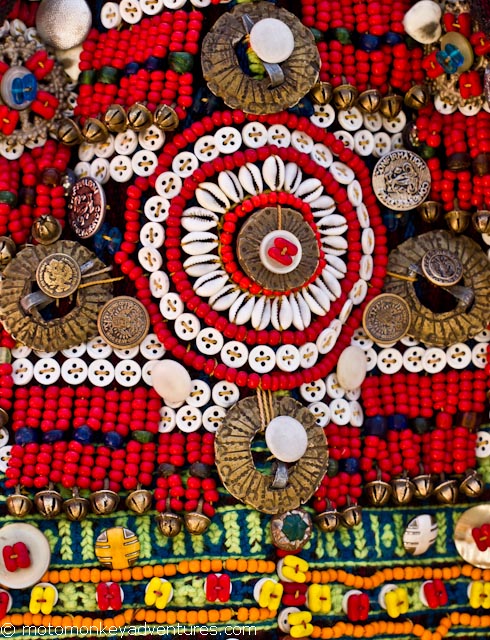 The detail that goes into the womens head wear.

Note: Before the introduction of acrylic materials in the 1980’s, they use to spin their own wool and dye the threads using soft toned natural dyes, then wove it into useable cloth before stitching together to form their dresses, all by hand. 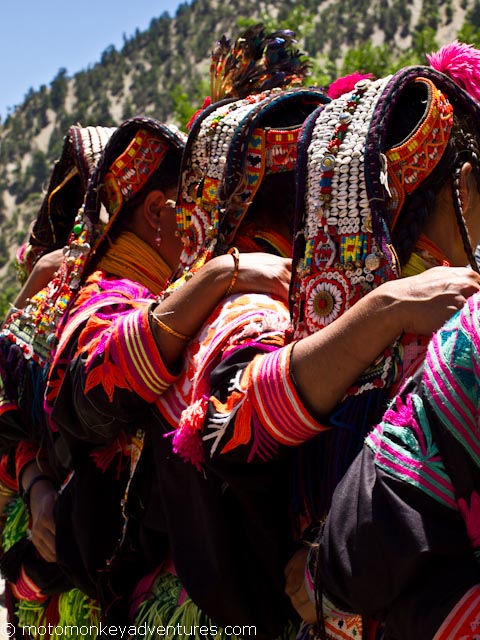 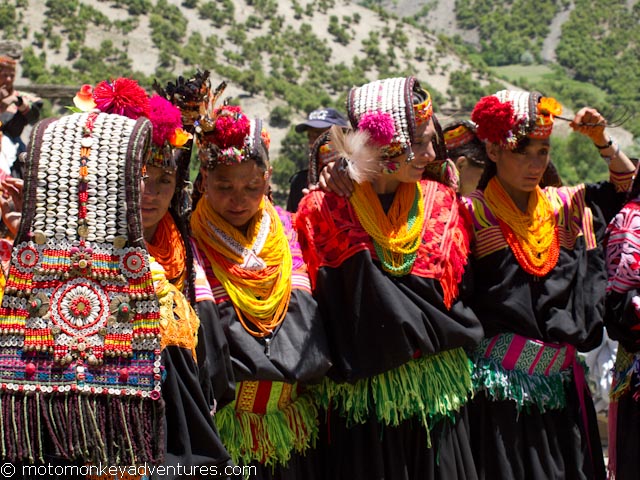 The differences in the men’s clothing were subtle but definitely distinct. They wear the traditional Salwar Kameez, but have a colourful braided drawstring for the salwar. Over the shoulder they also wear a wider braided band sometimes decorated with beads and shells. On the front of their cap they proudly wear a feather. 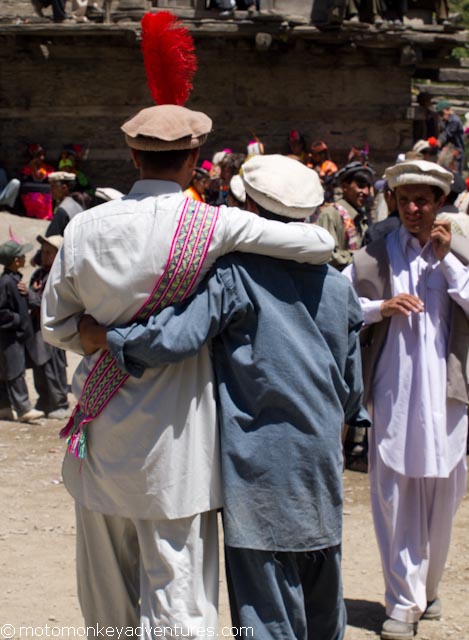 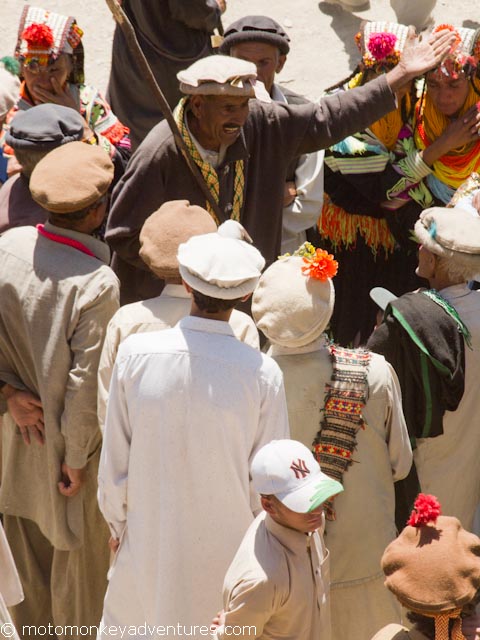 Everyone in the valley was excited. This excitement was amplified as on every roof top and every street corner was someone from the ‘Anti Terrorist Squad’ pointing a barrel at you. ‘Why destroy such a peaceful valley like this?’ I wondered. It was completely against what the Kalash people believed.  But I guess you cannot control everyone and it certainly put a wet blanket over everything. 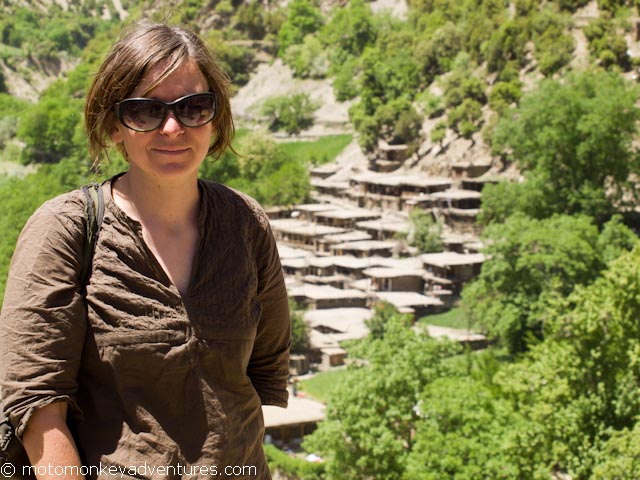 We stood high at the top of the village, watching all the colourful women dance around us. There were two main dances I could see,  the main one where a Man would sing songs in the middle while a long line of women circle around him dancing. The other is where women in small groups of five clasp each other’s shoulders and spin in circles. 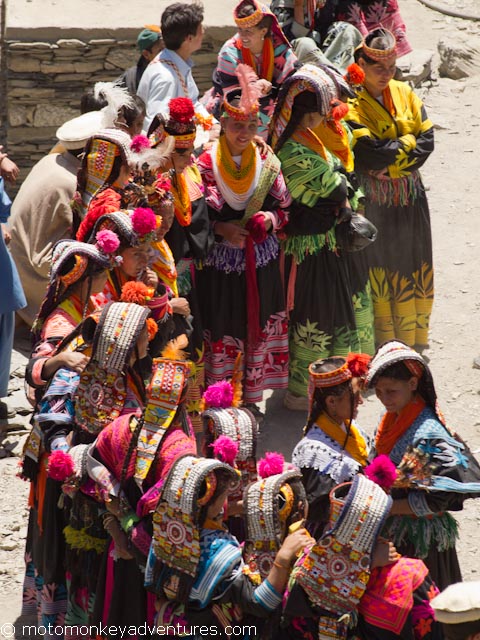 This was a celebration of the Joshi Festival which happens once a year as soon as the spring planting has been completed and before the men set out for high mountain pastures with their livestock.

Meeting the one of the daughters of the guest house we were trying to find, we followed her through a maze of houses, across roofs, down step ladders and around vegetable gardens, and we eventually arrive at their wood and stone two story house, overlooking the valley.  Everywhere you looked you could see into the homes of these colourful descendants of the soldiers of Alexander the Great, which was apparent in their skin, eye and hair colour. 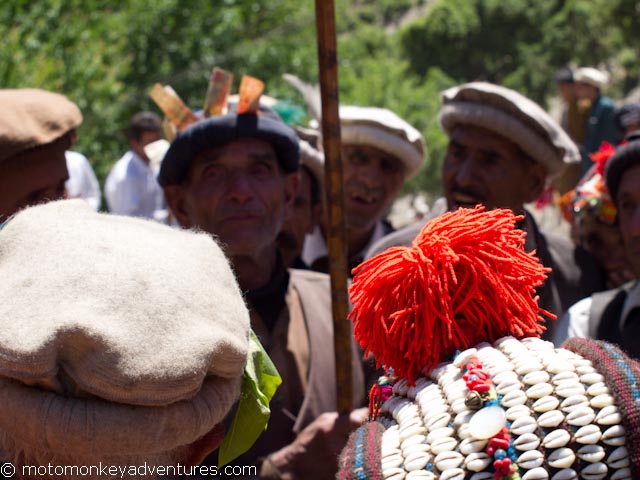 This man is a Sherman, people crowded around to hear what he had to say. 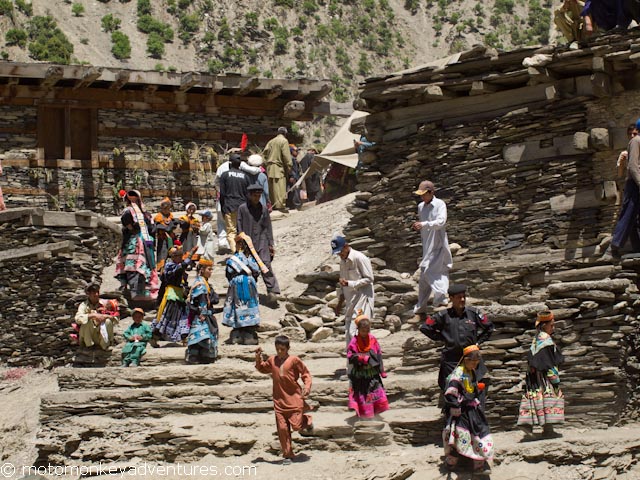 In true celebration of the Joshi Festival, we spent the night drinking local alcohol with the owner of the guest house, talking about his culture, his ambitions and his hate for the fact his guests have to arrive with at least two guards from the ‘Anti Terrorist Squad’. ‘It’s just not our culture, to have these people here’. 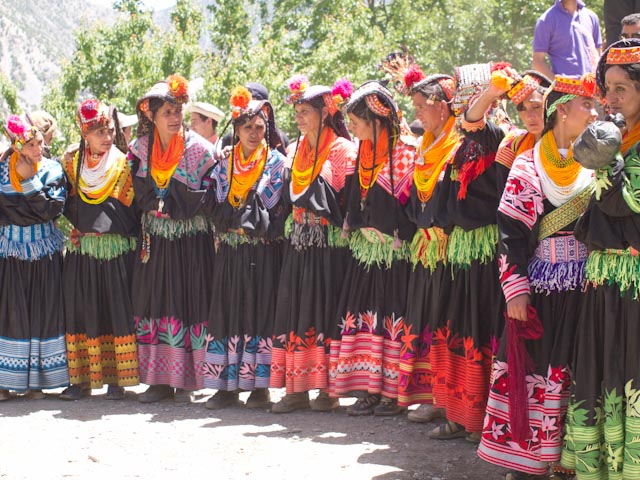 Resources – Kalasha – Their Life and Tradition by Akiko Wada
Not unlike me, Akiko, left home (Japan) with the intention of travelling to Europe via the Silk Route, but when she stumbled upon the Kalash Valleys, she found herself easily immersed into a Kalash family and eventually married a Kalash man. She created a pictorial book which gives us a glimpse into the lives of the Kalash women.