Warming my body in the sun, after yet another night shivering in my tent, I gaze up the valley floor to the snowy mountain backdrop. That’s where we are heading today, following the Ghizer River, right up to the start at Khuhush Lake.  Packing all the snack food we own, knowing it’s a six hour return hike to Khuhush Lake, Hungry Man has serious concerns that it’s not enough food. ‘Don’t worry, we will cook some fish!’ Yasir calls out. At the mention of fish, Hungry Man is ready.

Following Yasir’s mandarin shaped foot prints in the dust, I turned around to find Hungry Man is lacking in speed. Waiting for him, I discover he’s not feeling well. I hand him a packet of sweet biscuits which gives him a bit of energy. This works a treat, as I hand him another packet to put in his pocket. Scrabbling up the last steep section, my feet slipping on the bull dust and stones, my head emerges over the top, I take in a deep breath as the narrow valley opens out to a wide valley with a half frozen lake taking up the entire valley floor.

As my head emerged over the bank, this wonder fill view opened out to me

Exhausted, we sit in the sun and make tomato on crackers with more biscuits for desert. It wasn’t really enough food but it will have to last until we get back or catch some fish. Immediately after we finish our  lunch the boys start fishing. We have to bear in mind, it’s another three hours at least to walk back along the river, fishing as we go.

I had given up on carrying Hungry Mans fish since he never caught any! Following Yasir, we slipped into a great rhythm. He would call or whistle out to me as a fish flew through the air and landed at my feet. Then I was able to slip the fish onto the stick to join his unlucky brothers.  Eventually even I got sick and tired of scrambling over the rocks, the energy gained from lunch had worn off and I was making mistakes in my footing. I was sure I was going to break something shortly. We tracked back across the rocks to the actual track, collecting fire wood as we descended. We made it back to Langar just before night fall.
Dragging our feet, consistently dropping the bits of wood we had collected, we couldn’t see Honey Mans jeep. Disappointed and grumpy at the possibility of having to walk all the way back to the camp, a ray of light shone over the yellow jeep. Thank god for that!

Khuhush Lake was half frozen

Honey Man had his own adventure today. As soon as we left him, he got bogged in the mud. He tried to yell out to us but we were too far away. He walked back to the main fishing area, where he found some good mates of his who came to help push him out. Four hours after he was originally bogged he was finally free. So, it wasn’t only us who had an adventure today. 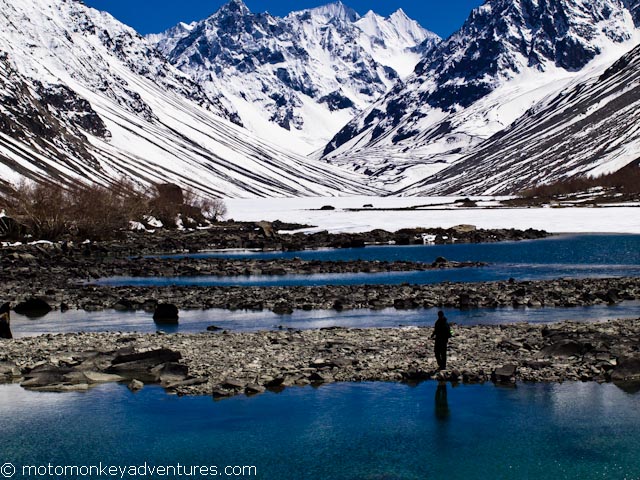 Hungry Man (Joel) fishing in Khuhush Lake
With our sticks and small logs poking out each side the 50’s jeep, we headed for the main gates of our camping area. I had a vision of Honey Man forgetting about all the wood overhanging the edge of the jeep and trying to enter the compound, only to leave Yasir and I sitting in only half a jeep with a pile of wood on our laps!