Riding across Pakistan, I couldn’t help wishing I was back in Gilgit. I was excited to be entering Iran and seeing new things but super scared to cross the most dangerous part of Pakistan and Iran, the most risky part of my whole trip to date. Leaving Pakistan wasn’t going to be as romantic as the past 6 months, it boiled down to three things, riding, expensive hotels and paperwork. How much fun can that be?I had been told by other overlanders that this is the worst 1000km in people’s lives and no one ever wanted to repeat the experience ever again. 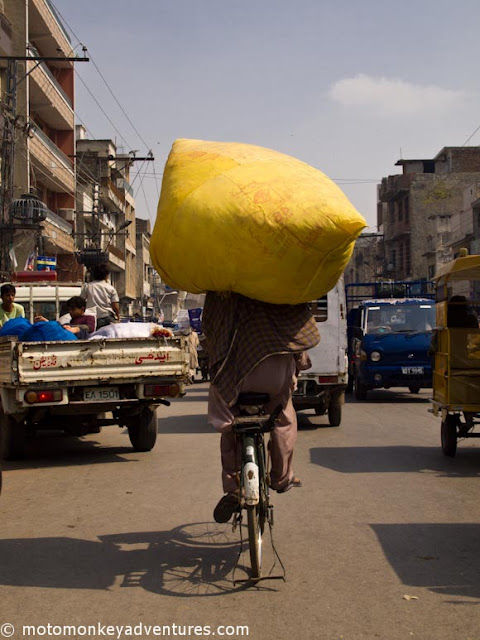 First on the agenda was to obtain my Iran visa in Islamabad, which was quick and relatively painless except for the cost. Second on the list was to arrange for my No Objection Certificate’s from Quetta to be able to cross Balochistan and then I had to inform the Superintendent of Police when I will be arriving into Quetta. 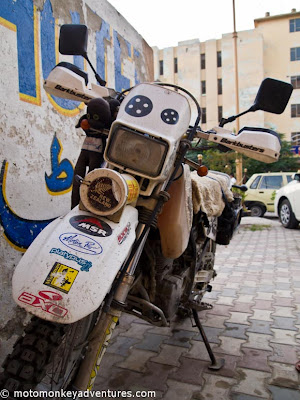 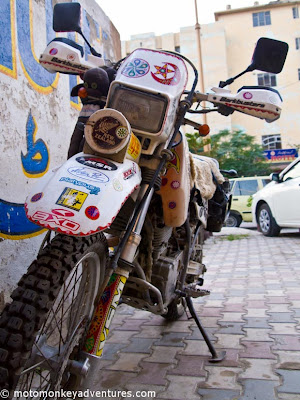 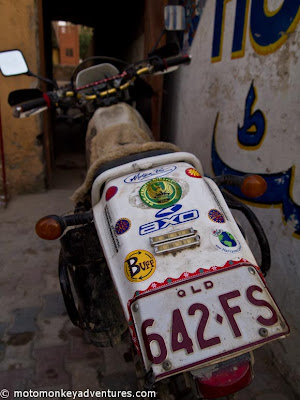 Not far from Sukkur, as the roads deteriorated along with the driving, I saw a local motorcycle carrying a huge bag of rice dart across my path . I knew we were going to hit,so slowing down and turning slightly I managed to turn a serious crash where I would have going flying, into a subtle side on crash causing me only to tumble off the bike. Angry, I jumped up as the man tried to drive off. I grabbed him and yelled ‘you help me lift my bike, you fucker’. I knew he couldn’t understand me but I wasn’t letting him get away so easily! By the time I walked back to my bike I was surrounded by 100 men, all helping me to lift my bike and offering chai to help calm my nerves. This was my first accident of the trip, I was shaken, slightly bruised but otherwise ok.

Leaving Sukkur early, I head into Balochistan but not without doing a 100 kilometre detour first, as I unintentionally headed back to Punjab.Was this some greater power telling me to return to Gilgit? Eventually, a few hours late, I found the border to Balochistan and was picked up by my first police escort not far from Jafferbad and taken to the Deputy Commissioners Office for my first NOC. Then I was passed from one police escort to another until eventually I was less than 60 kilometres from Quetta but I had run out of daylight. The police stopped me in Much and took me to the Superintendents house where I tried to blend in with his wife and nine children where I slept the night on the floor of their two room house. 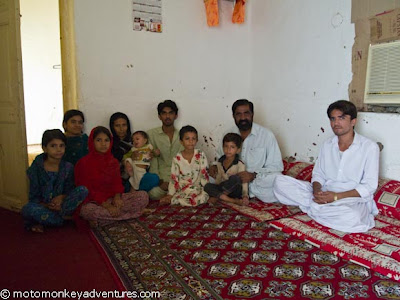 My DSP Much family who hosted me for a night – thank you so much for making me feel so welcomed!

Arriving in Quetta around 11am, I was taken to the Home Department to apply for my next NOC and they issued me with a 5 day exit permit. I still had three days left of my visa but personally I think they knew something because on my way to my hotel my motorcycle started to make horrendous noises… Whats wrong? Why are you breaking down in the MOST dangerous city of Pakistan?

At this point I was too upset. I had just driven nonstop for three days, I had somehow caught a cold, developed a vaginal fungal infection, having my period and I was fed up with the politics, paperwork and the lousy police escorts and now my bike was having mechanical issues. Why was it all happening at once?Luckily for me I had made some really good contacts in Pakistan, so I contacted my friend in the Pakistan Bikers Club and asked about a mechanic in Quetta. The following day with my police escort in tow, I found the mechanic shop and they got right to work, pulling my tiny bike into millions of pieces. While this was happening the Superintendent of Police Security for Quetta called me into his office for a small chat about the situation in Quetta.

For the next three days, I was under house arrest – well not really but it sure felt like that.I was granted two hours per day in the workshop. I would be picked up at 11am and taken back to my hotel at 1pm. Not exactly what I wanted but it was a compromise. 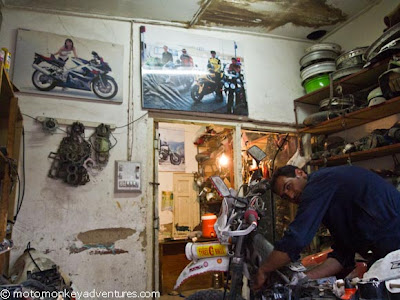 Here is my alwesome Mechanic who worked around the clock

However, this was what actually happened. 11am would roll around, the police finally arrived around 11:30am, but the workshop was just opening, pointless me being there but I was happy to be out of my chicken coop (my room). 12:30pm would hit and the police, bored to be standing around babysitting a foreigner, would take me back to my room where I would spend the rest of the day watching tv. 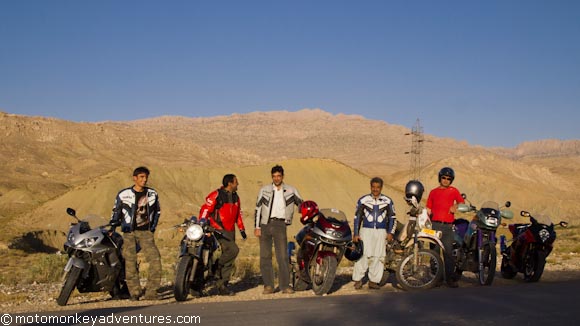 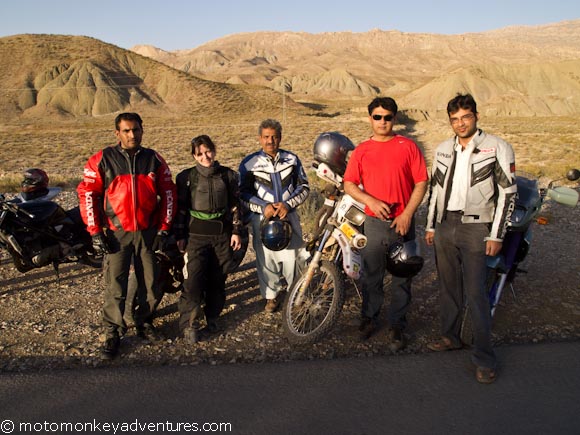 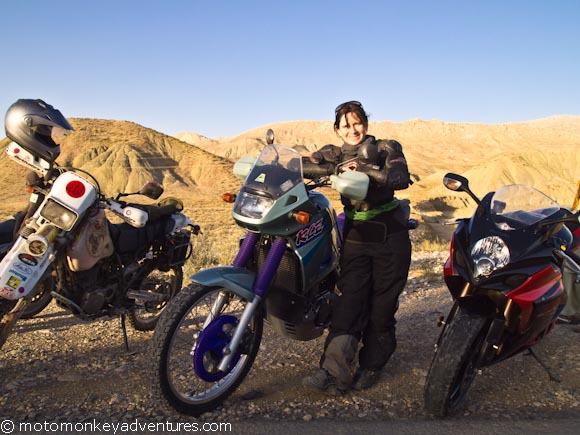 Three long days had passed by when my bike was finally ready. With a new cam chain, piston and clutch bearing, and valve clearances it was purring like a small cat. I was now ready to leave Quetta and head for the border with my police escorts of course! 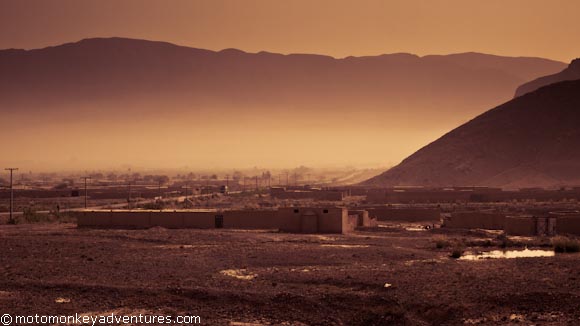 While waiting for my next escort, I got a good view of a desert village 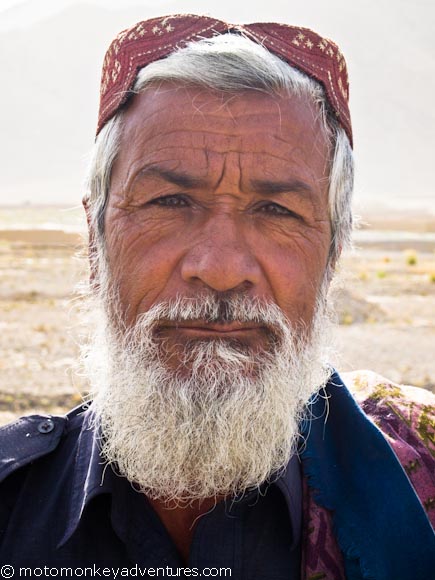 This man made me Chai while waiting 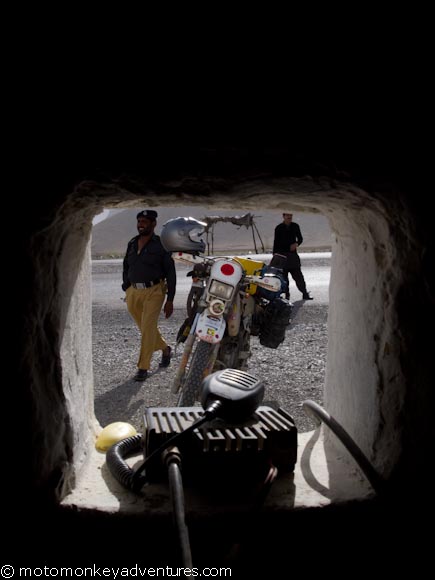 While waiting once again, I got to watch my guards watch my bike