It wasn’t even 6 am when Michael got up and went outside, I couldn’t believe it. Turning over I tried to sleep again, but it was useless. I got up just as Michael made a delivery with a pot of Chai. Brilliant. 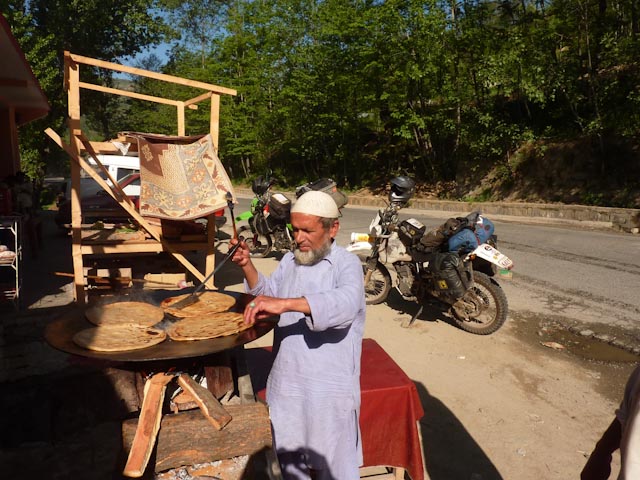 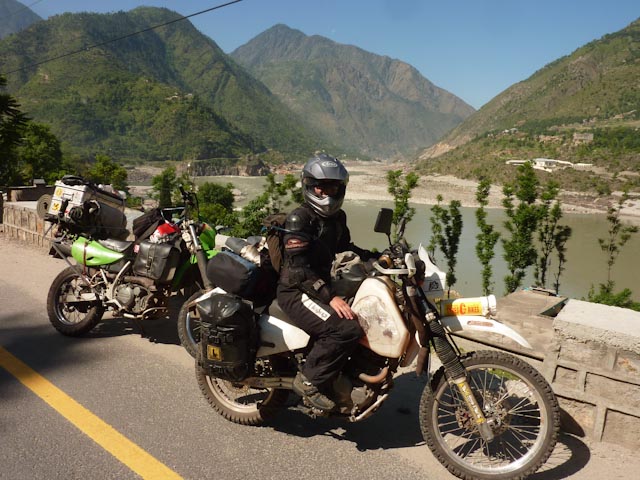 Indus RiverLeaving not long after seven am, we rode deep into the area that everyone in Lahore warned me about, ‘there are children who throw stones’, ‘it’s a dangerous area, make sure you join a convoy’. All these warning washed away from my mind when I saw the mountains unfolding before me. We were picked up by police escorts, sometimes we lost them sometimes they lost us. My patience with them was wearing out, with them and all the police check points along the way. It was really slowing us down. 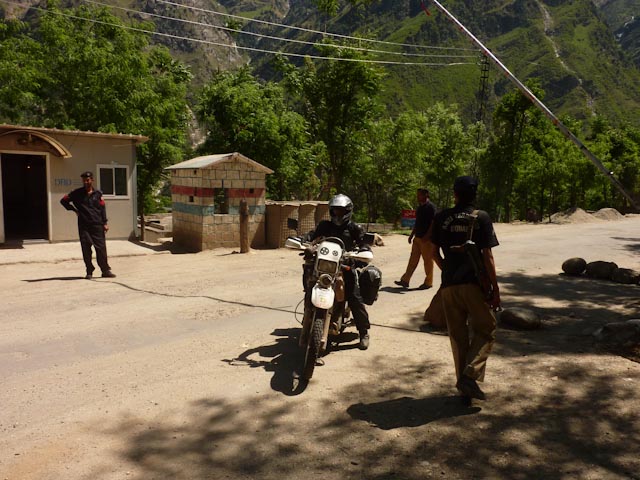 First check point of the day

Without fail, we would arrive at a barrier and the guard would amble out and say we have to park over there, pointing to a place unsuitable for motorcycles let alone awkward to park from the position we were now facing. After we moved the bikes, he told us we would have to fill out the scrappy, completely falling apart book. ‘Yes, we know… Go and get it!’ Another five minutes would pass and he would have returned with the book.
I had started my day filling these things out properly, but as I crossed each one I started to give up on entering my last name, my proper visa number and anything else I could get away with. You might think I am being a bit blasé but these guys were always giving us the wrong book to fill in or a blank page in the middle of several loose pages. 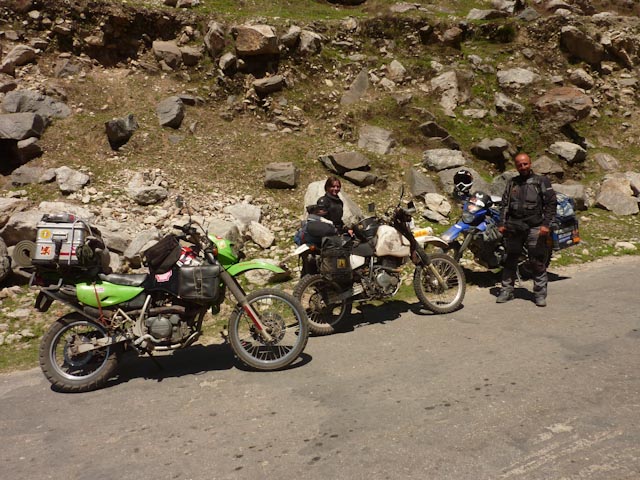 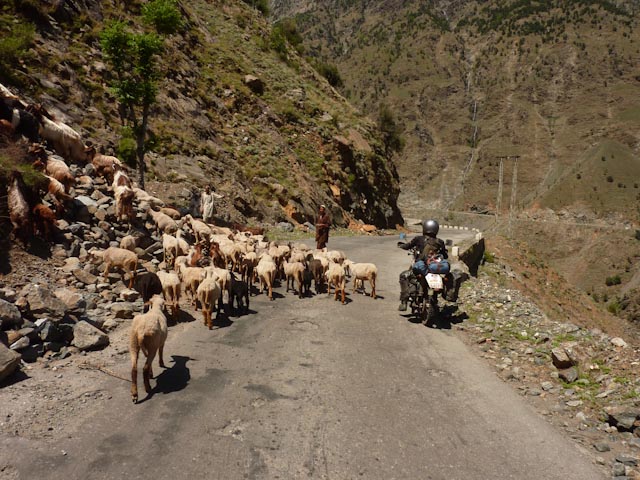 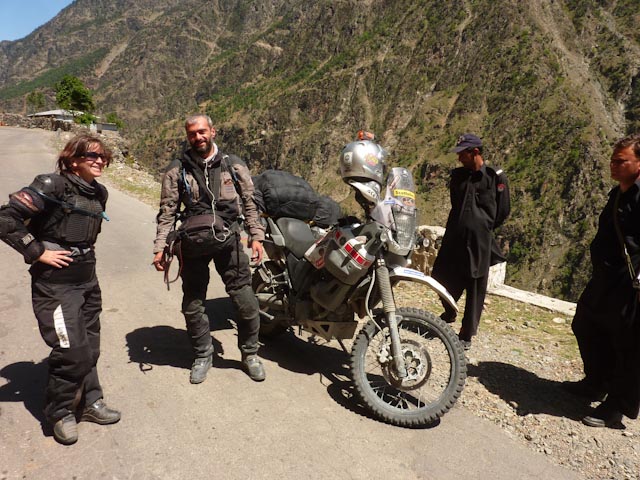 We managed to ditch our escort with this Turkish guy. 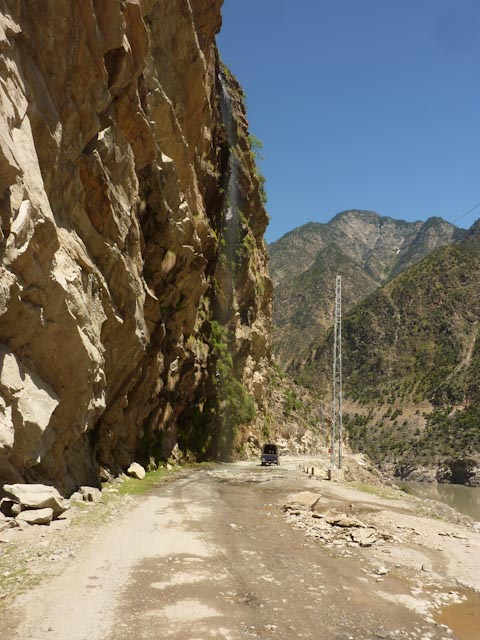 But what do we have here… 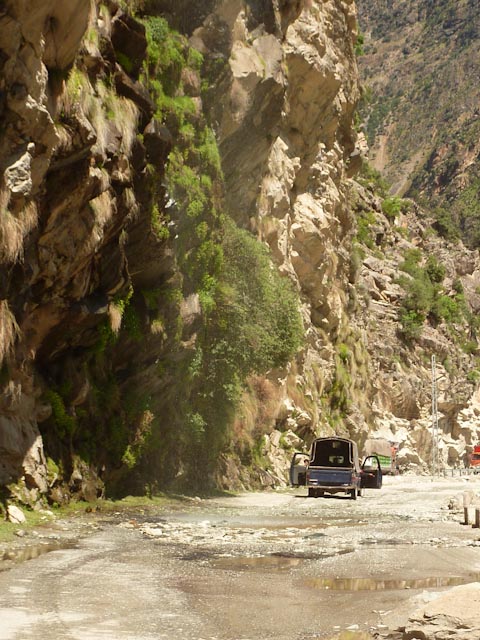 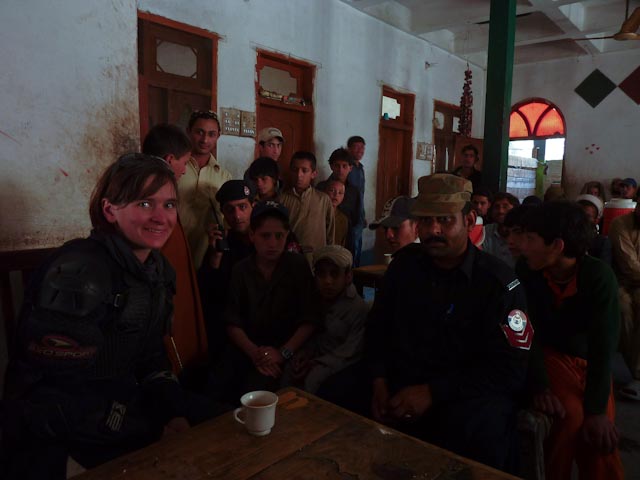 They even joined us for lunch! 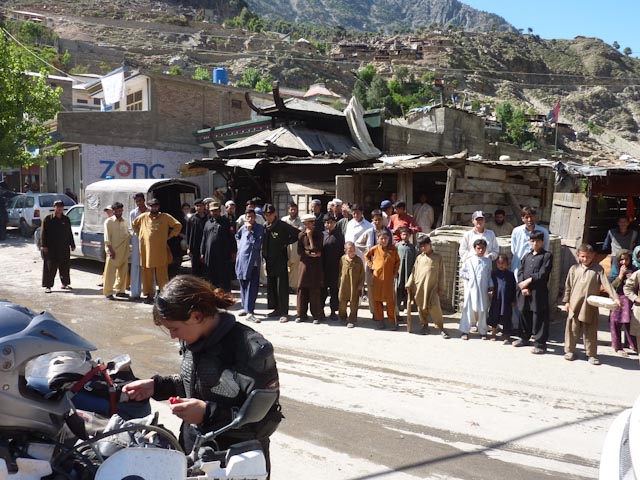 While we were having lunch inside, we knew our bikes were safe with so MANY people watch, plus the police 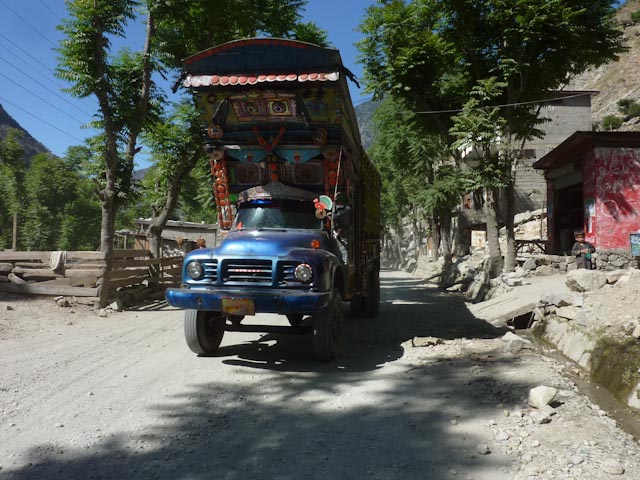 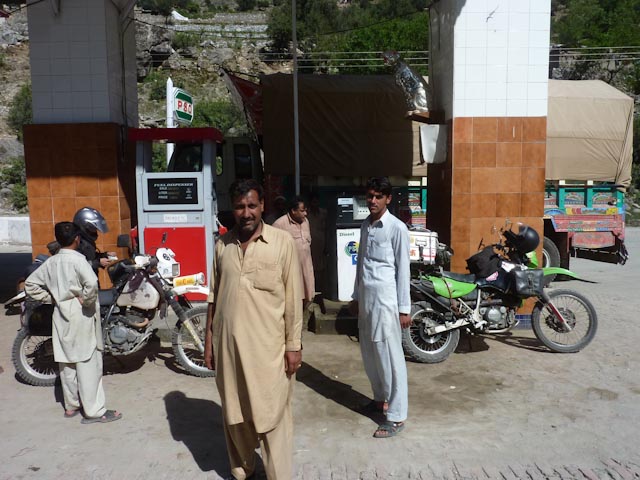 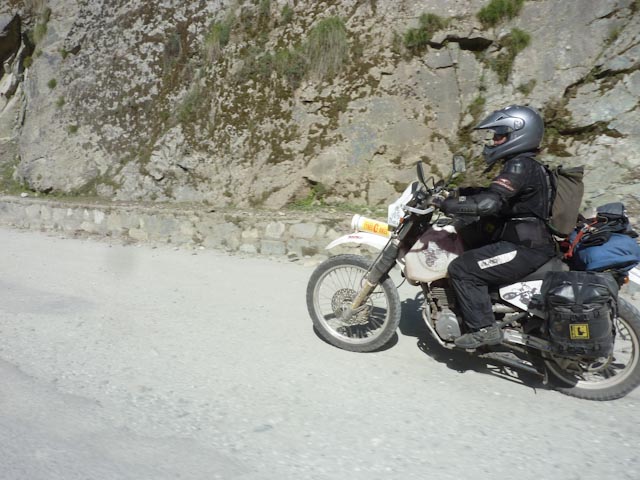 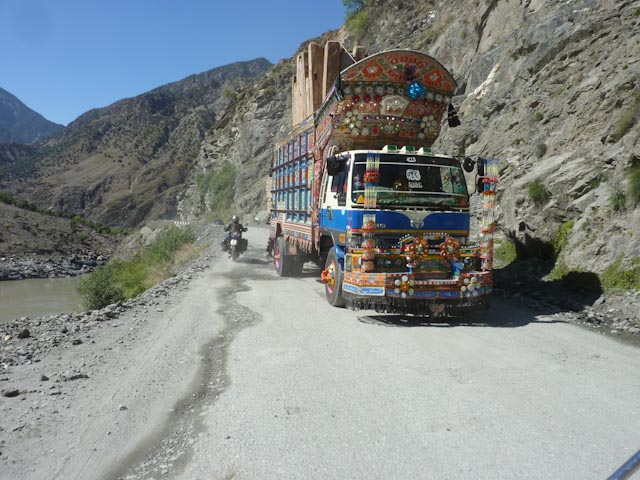 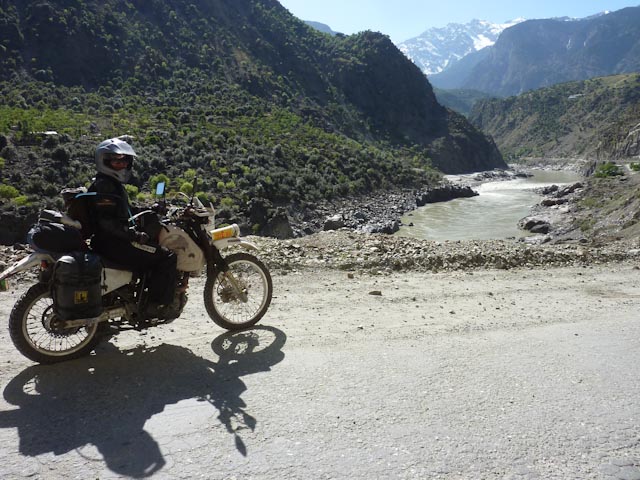 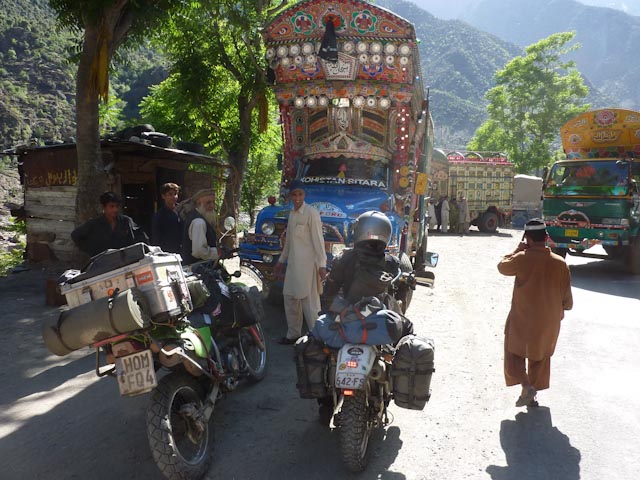 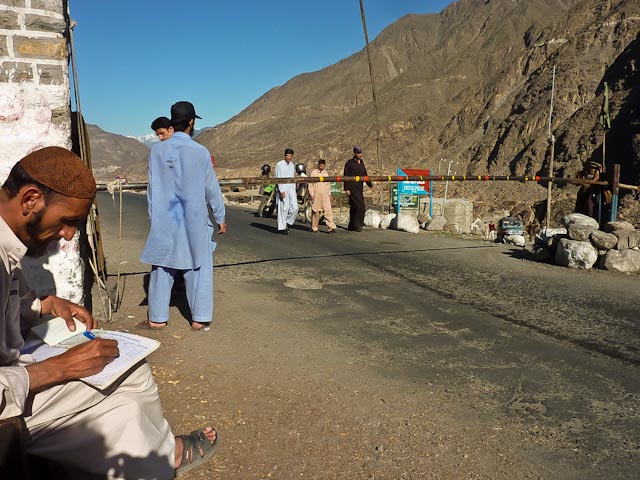 At one check point the guy insisted on filling it out himself, with our passports in hand, he couldn’t even find which country we were from!  This makes you wonder IF something happened would they even know who was where, when they do not even ask if you are coming back this way. 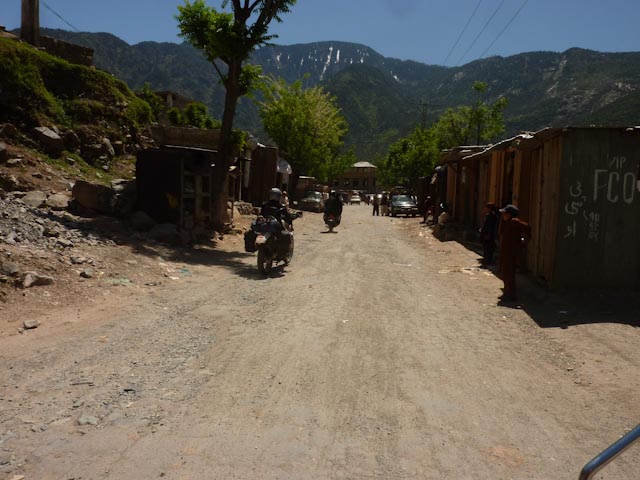 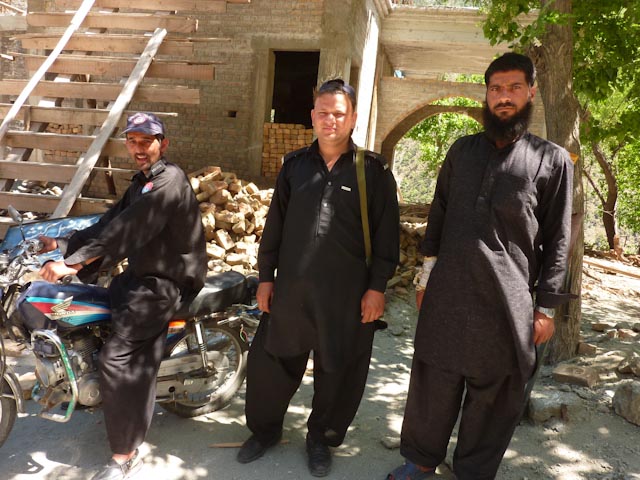 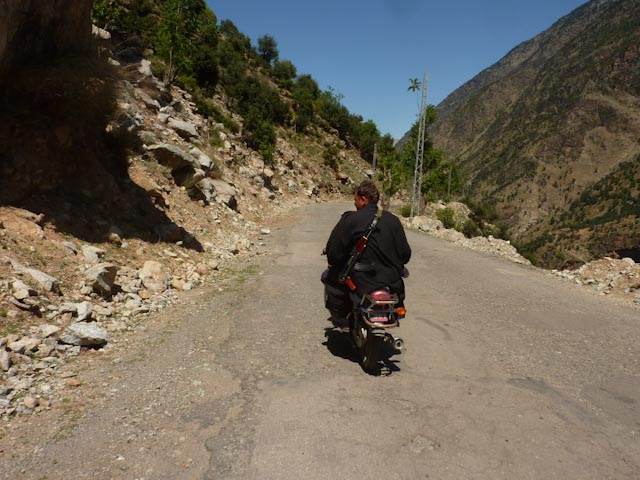 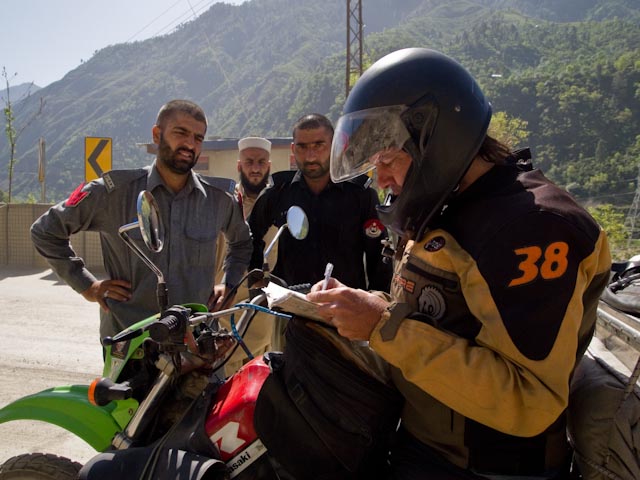 Michael trying to fill it out as quickly as possible 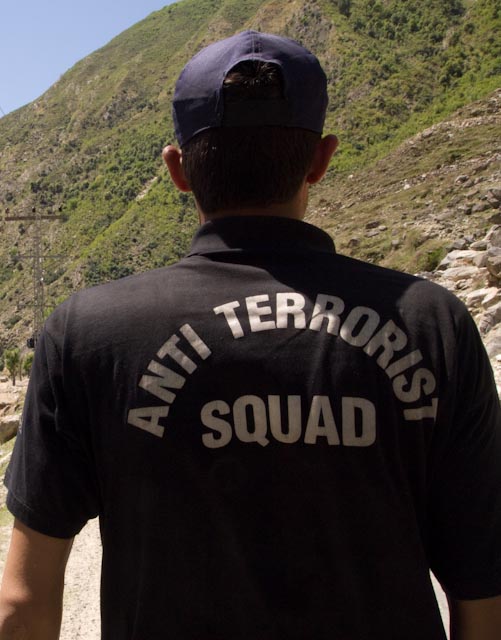 Once again, night was falling and we were 60 kilometers short of Chillas. We had been riding for 12 hours and had only covered 200 kilometers. I was tired. Turning on my headlight, I had to pair up with Michael to ensure good road coverage and that I wasn’t about to hit a huge rock that had fallen on the road. Then a check point appeared – eeekkkk another thing to hold us up on getting to Chillas as early as possible. In the light of the policeman’s torch I entered in my details.’Where are you going tonight?’ I knew where this was heading and there was no way we need an escort to slow us down.  ‘To Chillas’ Michael replied ‘How many kilometers?’They discuss amongst themselves before agreeing with our estimate of 60 kilometers.‘Can we camp here? Michael asks, pointing to a space behind a beat up station wagonjacked up with its front wheel removed.‘Sure, but it’s not safe out here’
‘What not safe outside a police station!’ Michael chuckles ‘Do you want to sleep here? heasks me.

‘Great, that’s perfect!’ This was a fantastic idea. I was too tired to continue anymore, knowing full well it was too dangerous to ride the KKH at night.‘Let’s have a look inside’  We walked in through large blue metal gates. I was surprised to discover it was actually quite a large police compound, completely enclosed with the various rooms, including a jail.There was much discussion about where they should put us up for the night. I was happy to pitch my tent in the middle of the dusty area that had two token plants. This is what they called a garden.  Michael even offered to sleep in the jail. Horrified by our suggestion, they attempted to laugh it off.

While they still discussed the issue of us sleeping there, a table was placed before us, with dhal and chapatti’s laid out on it. This was turning out to be the best hotel I’ve ever stayed in.  During the dinner, the superintendent walks in and everyone stands up to greet him. I drag Michael up from his seat and reach out to shake the important man’shand. This is very forward of me, as most women do not shake hands with another man but he’s our host for the night, and Michael was lagging behind. Sometimes I wish I was a man, but then again I might not be so aware of these things! 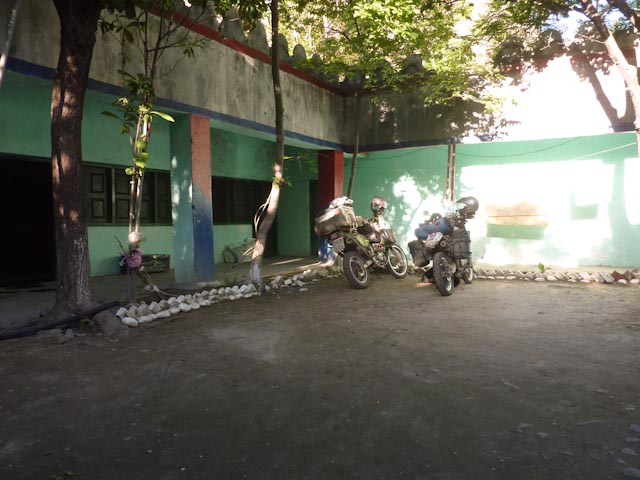 Finally the superintendent gave us his room for the night, a secure room with two single beds and an ensuite! In the morning, fried eggs, roti and fruit were for breakfast – This just confirmed my thoughts that this was the best hotel ever!  We finally passed Chillas over an hour and several police check points later, I really don’t think we would have made it if we carried on last night. It was a really long way! Passing through Chillas, stopping only  to get some fuel, marked the end of the dodgy section of the KKH. Hopefully from here we will be left alone and have no more escorts.