We were passing what seemed like an endless line of heavily decorated trucks, waving out to some of those we have made friends with along the way. Several kilometers later we found ourselves at the cause of the hold up. There was a massive rock blocking 70% of the road, leaving only an opening as wide as the trucks. Despite the fact that there was just enough room, the truck slowly passes through the gap, hits a rock half submerged under the ground, which tilts the whole truck towards the massive rock closing the gap to millimeters to contact! The traffic police, guiding the whole procedure, stops the trucks and we were allowed to pass through jumping the queue of hundreds. 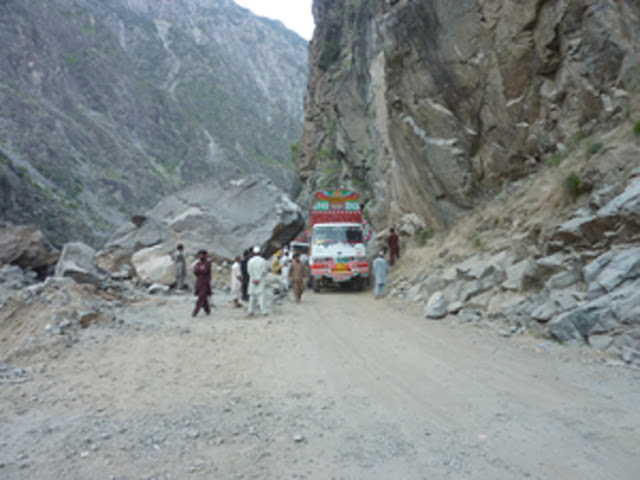 Arriving at another long queue, we once again passed everyone until we came across theolder Swiss couple traveling for years in a small 4×4. Parking behind them, Michael went over to speak to them while I hung around the truck drivers answering questions and taking photos. Michael and I had planned to arrive into Gilgit later that night, but we changed our plans to match the Swiss couple and head for Skardu. 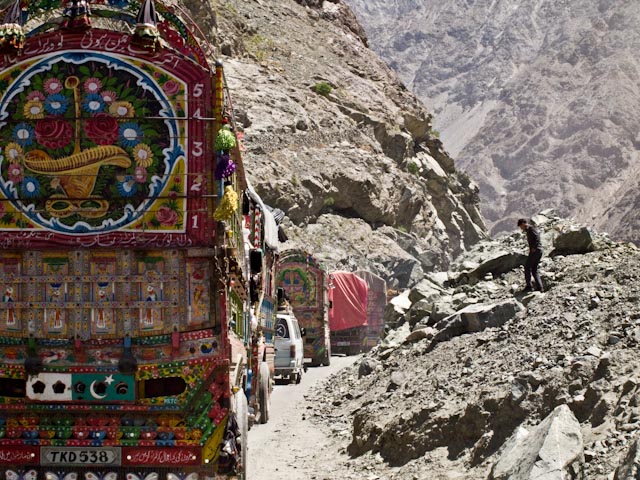 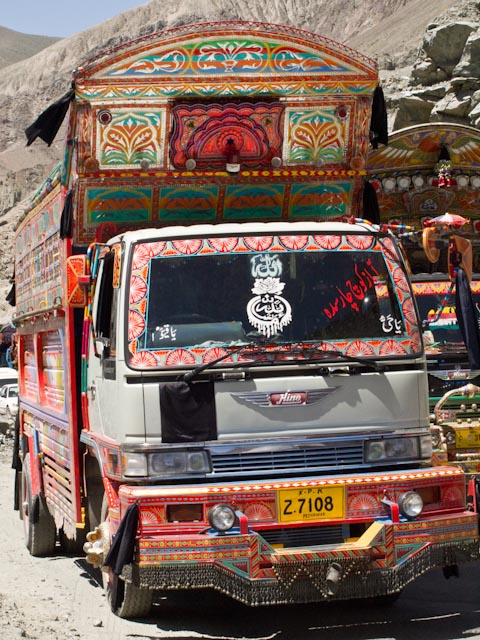 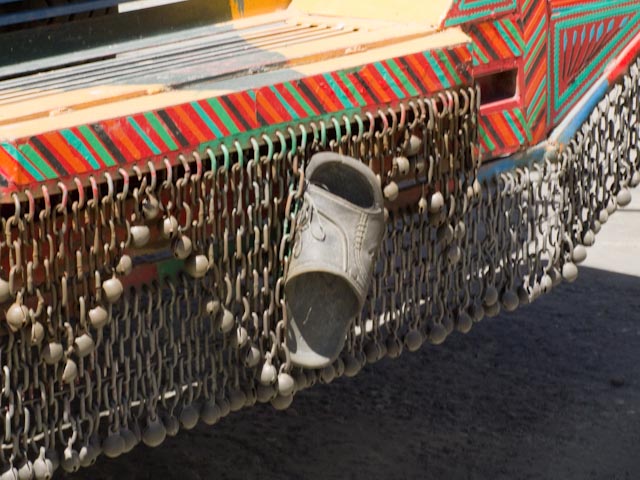 I couldn’t work out if this was a hit and run! The driver of this truck was embarrassed when I took a photo of it! 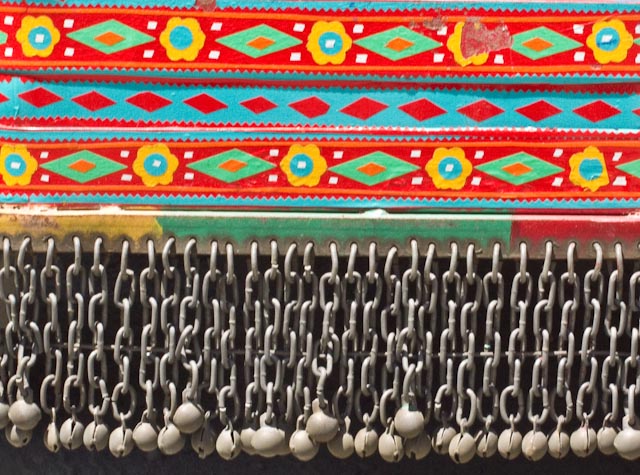 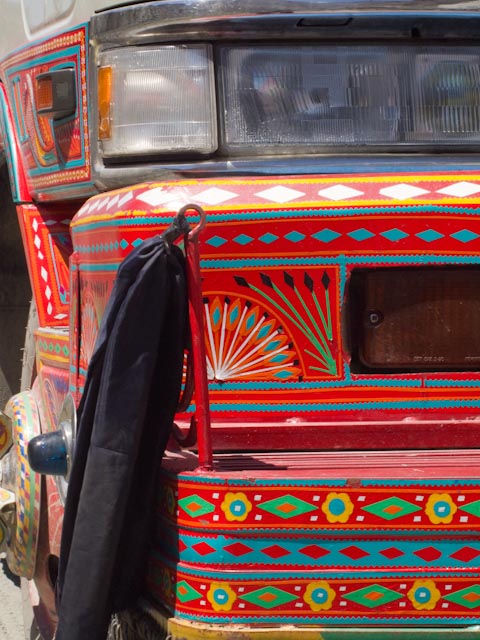 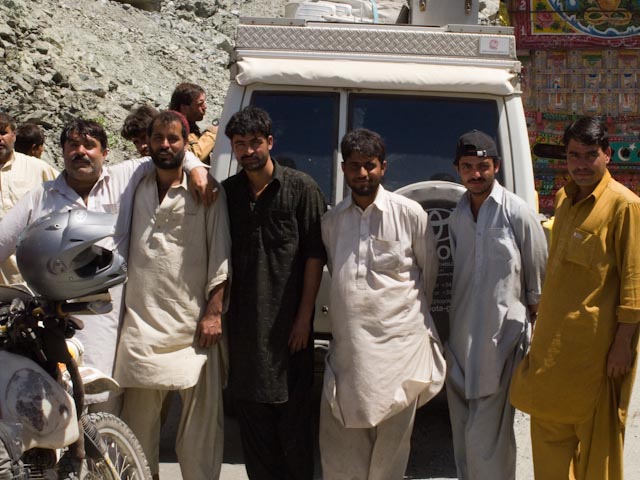 While Michael talked to the Swiss couple I spent my time with these guys.

Finally the traffic started moving again, the hold up this time was a steep sandy pile of dirt, caused by another huge landslide. We were pushed to follow the next truck. Michael and I hung back instinctivley, as half way up, the heavy bags of cement came loose and started to drop out exactly where we would have been if we followed the locals directions. I know cats have nine lives, but how many does an overlander have? I think I might have used up 90% of them in India!! Life seems to go on, and I was able to ride up the landslide avoiding the bags of cement.
Overlander’s might have more lives than an average cat, but my tubes are taking ahammering. Riding into Jaglot, I felt my rear wheel siding about. Surely it cannot be another flat tire!  It was only yesterday when I got my first flat tire for the trip. Looking back at the photos, I had it for longer than I realized!

A few kilometers out of a small settlement I finally noticed – pulling over I started to pull the tube out. Michael decided he couldn’t wait and strapped it to the back of his bike and rode back to get a local to fix it. Sitting on the side of the road, every truck driver asked if I was ‘TK?’ (Ok), I was visited by three donkeys, two goats, a group of young boys wanting to play cricket and a car full of male teachers stopped to talk and only left when Michael eventually showed up. 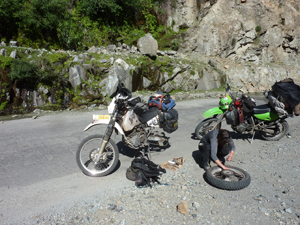 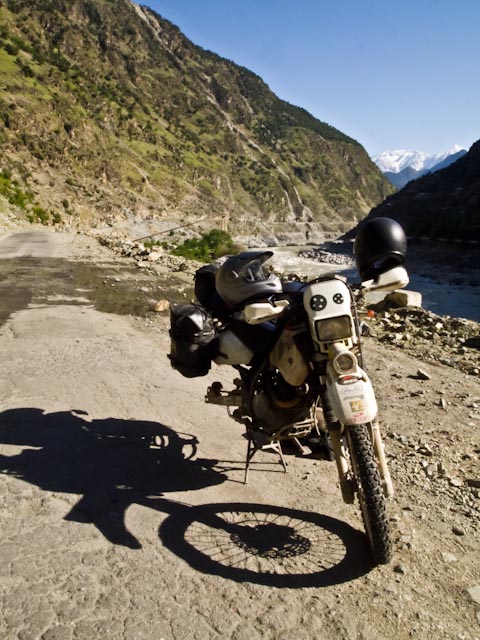 In between all this excitement, I was busting to go to the toilet. But how was I going to do that? Women DO NOT pee in public. I found a small ledge above the road giving me shelter from traffic in one direction. Well that’s what I thought, but just as I was about to pull my pants down, a truck drives past and a man pokes his head out the window and gives me a big smile and a wave! Damn – I’m white and a female, alone, with a dismembered bike! Of course they are going to hunt me out…. I could hear another truck approaching, I dropped my pants quickly, peed  and was back standing next to my bike before they turned the corner. Pheewww now I can relax!

Not long after Jaglot, where I had spent an hour trying to get the men to listen to me on how to fix my tire. I surprised them by putting talcum powder in my tire and  Michael joked about it being cocaine – which got everyone laughing and pulling out their stash of hash. We got on our way and turned off the KKH and crossed our first suspension bridge. Of course we wanted to take a photo of it, but there was a nice sign, which we ignored and then crossed. 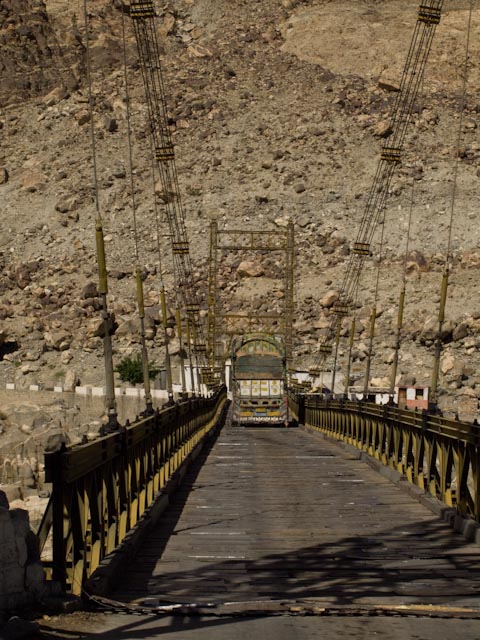 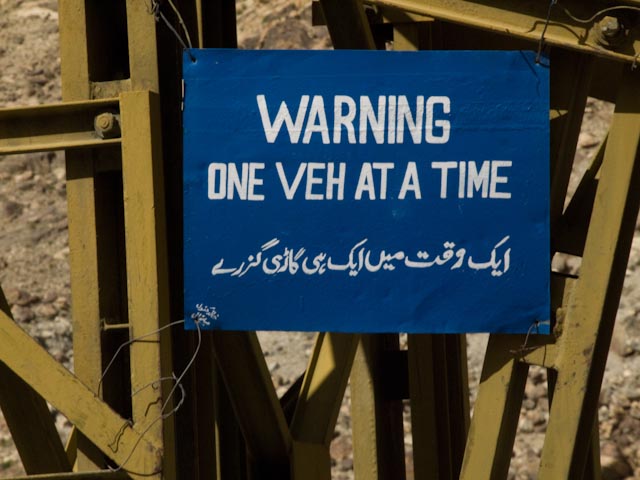 Time wasn’t on our side, neither were the kilometers. We were just so childlike with the beautiful scenery, everything was talking longer than we thought. At 3pm, we passed the Swiss couple camping outside a PTDC guest house.  Judging we had another 3-4 hours of daylight we motored on. Suddenly it was like a switch, the time had flown right past us but the kilometers hadn’t kept up. Another slow police check point, signing a book in the dark before moving onto the next one. I was grumpy, we had been on the road since 6am and now it’s was 7pm. Skardu wasn’t even in plain sight – how far did we have to go? 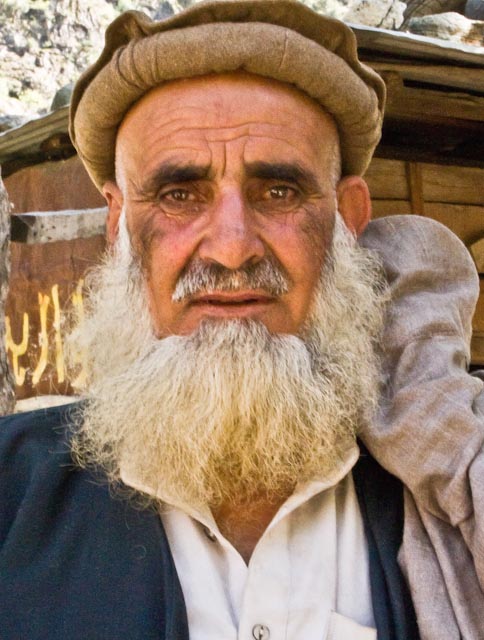 One of the truck drivers I’ve meet on the KKH 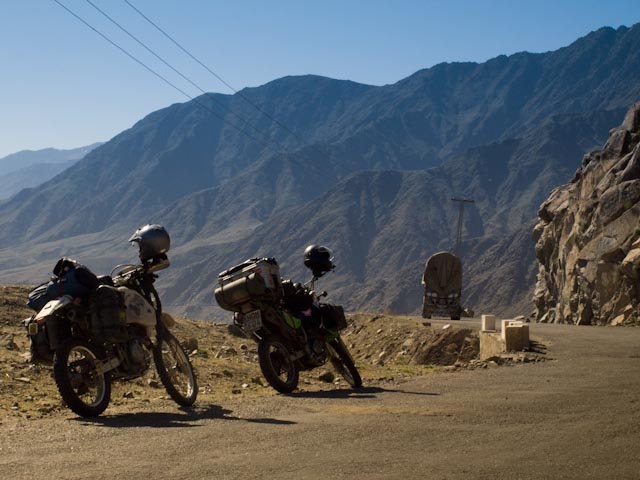 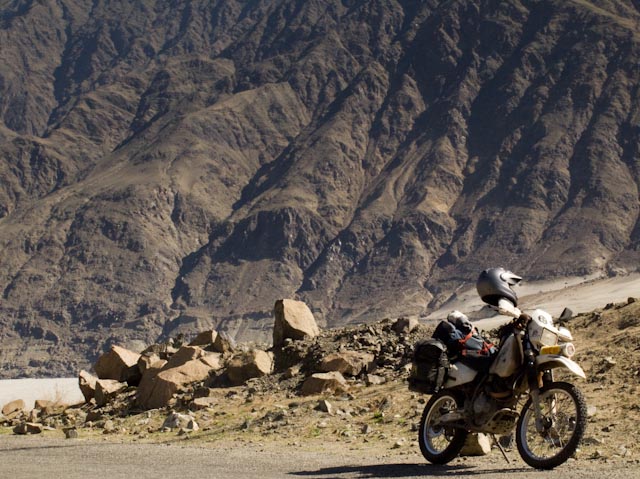 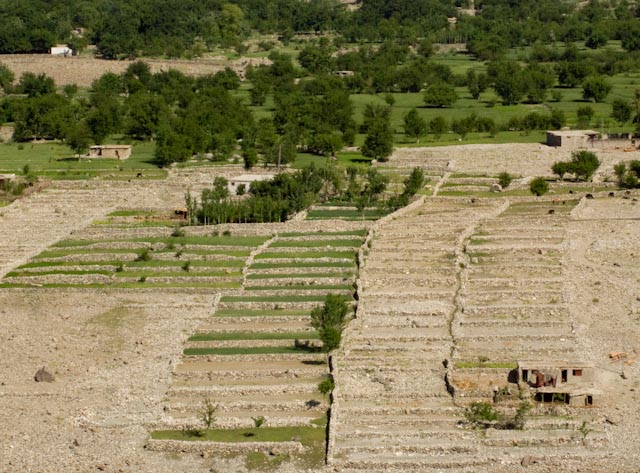 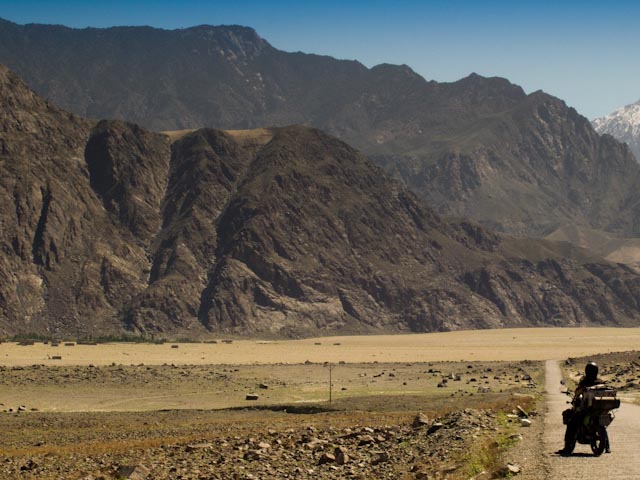 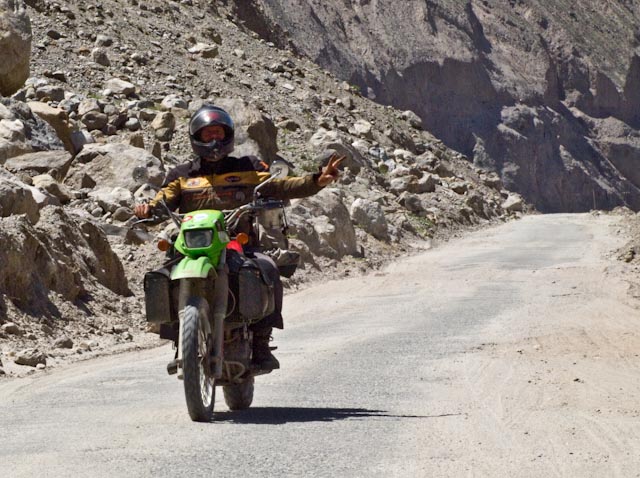 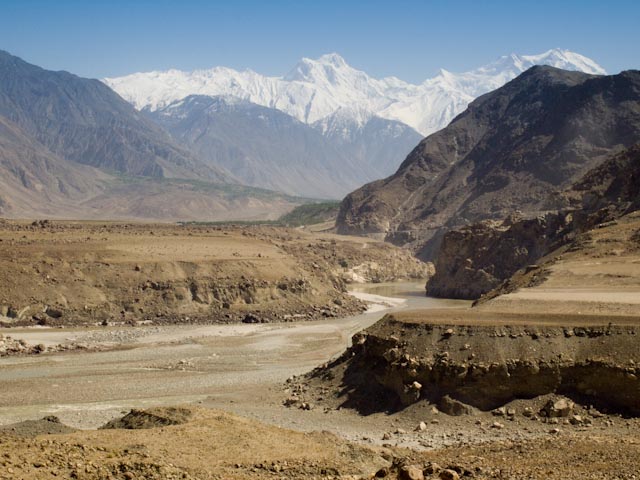 In the fading light I watch Michael struggle across a fast flowing river, jumping over boulders, rear wheel sliding amongst the submerged ones. Here goes I thought to myself, I’m already cold I really hope I don’t stall or drop my bike in this torrent! With clenched teeth and water in my boots, I made it across though.  Each meter that we covered in the darkness, riding once again side by side, ticked by so slowly, I was going mad. I also couldn’t believe this was the third time. I’m breaking my number one rule, three times in three days! The more I thought about it the more angry I got. The KKH was dangerous enough without adding any more potential dangers.

Exhausted we arrived into Skardu – thank god for that! We had seen only one hotel near the airport and in the town, well it actually turned out to be a small village. Eventually we found a garage with mattresses on the floor for Rp200 per person with a cold water bathroom across the alley way. How dodgy was this? It didn’t seem right – Skardu was meant to be a large tourist destination, not a small village with any proper hotel / guesthouses.

‘Is this Skardu?’ I ask one of the boys hanging around staring at the bikes.‘No!’ and points down in the direction we were travelling in.Completely disheartened and shattered, we climb back onto the bikes. It’s now freezing, and I am still only wearing my AXO mesh amour jacket! 10 more long kilometers to go. My head drops down wondering where I am going to find the extra energy to get there. 10 kilometers doesn’t sound like far but when each and every kilometer seem like 10, mentally it was going to take awhile.

Hotels, one after another came into view, I guess this is Skardu? We got a room and managed to convince the owners to squeeze the motorcycles into the kitchen storage room. Climbing into our beds, we crashed out, without dinner.