Much to Yasir’s and Hungry Man’s (Joel from Sweden) delight, we started fishing as we drove up the valley. Leaving Honey Man behind to mind the open jeep, we scrabbled / half slid down the steep bank to the Ghizer river’s edge. Sitting down on a grassy patch, the boys start preparing the rods, as cows and goats munched the grass around us. 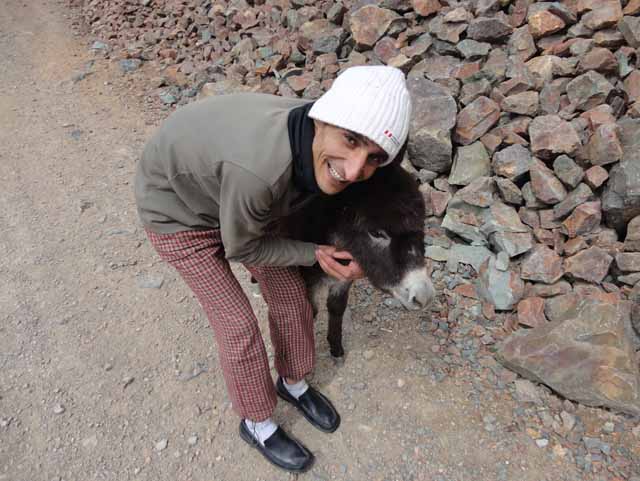 I keep on telling Yasir he looks like one! Photo thanks to Joel 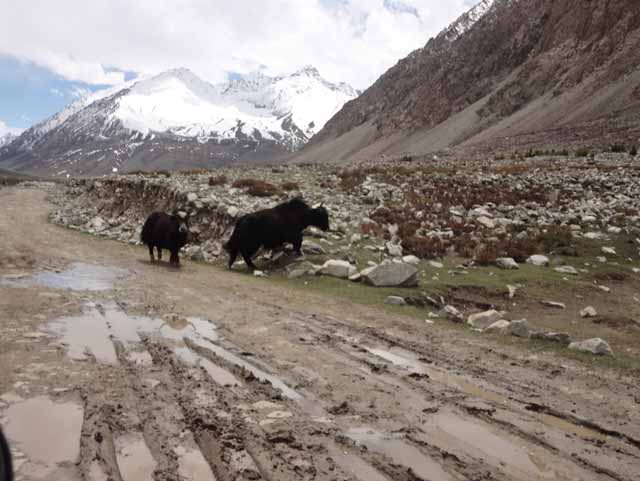 In my backpack, I had plenty of water, snacks, camera (for the big one!) and most importantly the music angle (portable speakers). I was completely prepared to have a nice relaxing day spread out in a cosy nook of the stream, only with one ear open for screams of delight when one of them caught something.

I couldn’t get further from the truth. Being able to set up his rod blindfolded, Yasir finished first and headed down to the river. I ambled down after Hungry Man a few minutes later, looking up and down the stream we couldn’t see Yasir immediately. I spotted his white beanie disappearing around the next bend and I wondered what secret spot he knew of.
Hungry Man threw his line in a couple of times before we decided to catch up with Yasir. Half jogging along the massive boulders forming the river’s edge we got him in our sights and Hungry Man threw his line in once again. Looking up, Yasir had disappeared again! What was going on? Why was he running away from us? 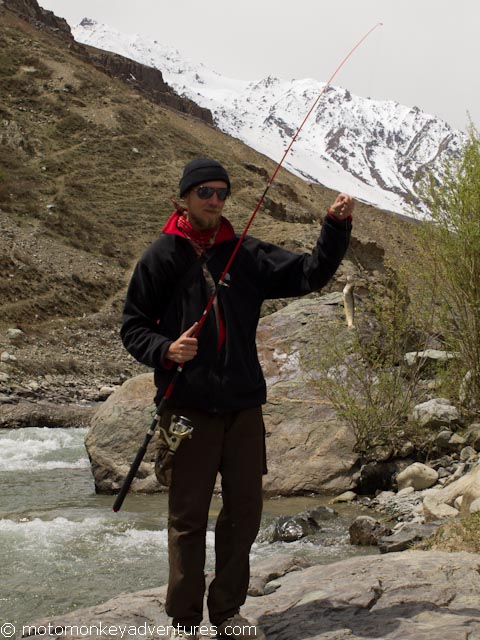 The first fish of the day – maybe even the largest!
Finally Hungry Man felt a tug on his line. Reeling in his line he discovers the tiniest trout you ever laid your eyes on! ‘What do you think?’ Hungry Man queries me ‘um, it’s not even bigger than my hand, just throw it back!’ I state.  ‘I’m going to see what Yasir is up to’. Carefully picking my way along the boulders, ensuring I don’t slip into the icy cold raging river, I finally caught up to Yasir. His luck was as poor as Hungry Man’s. 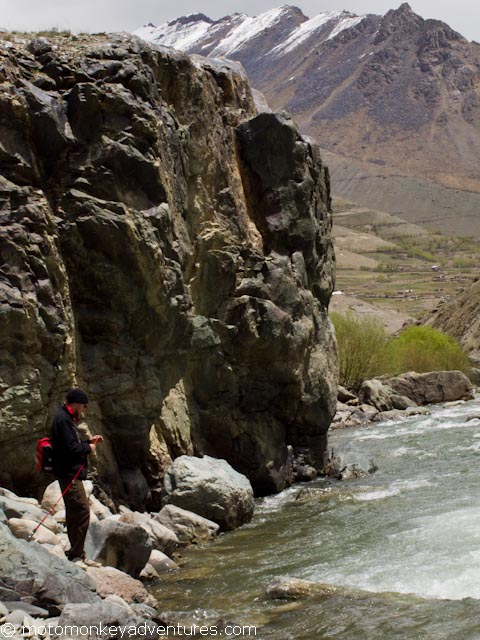 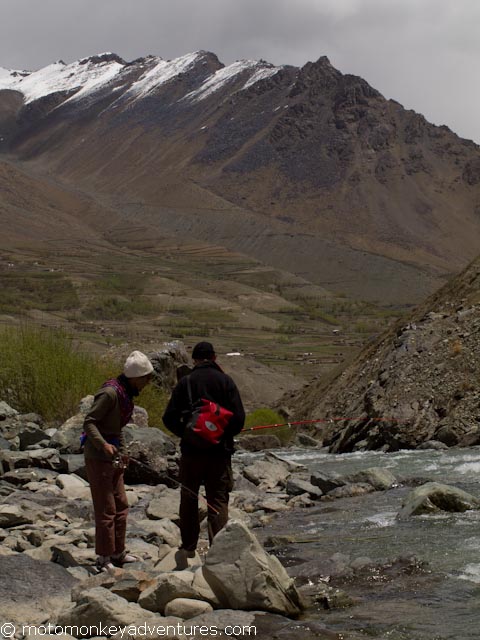 Just as I lay down on a nice smooth warm boulder, Yasir just took off. I cannot believe it, I just caught up with this guy. No wonder he wasn’t catching anything! Not far up the stream he finally landed a tiny trout, it was smaller than Hungry Man’s! I sat gobsmacked when he broke off a branch and threaded it through the gills, creating something for me to carry the fish with. Still stunned I asked ‘are you sure we can keep this one?’ My question was answered when he threw me another tiny fish to thread onto the stick. This was the size, just get use to it. 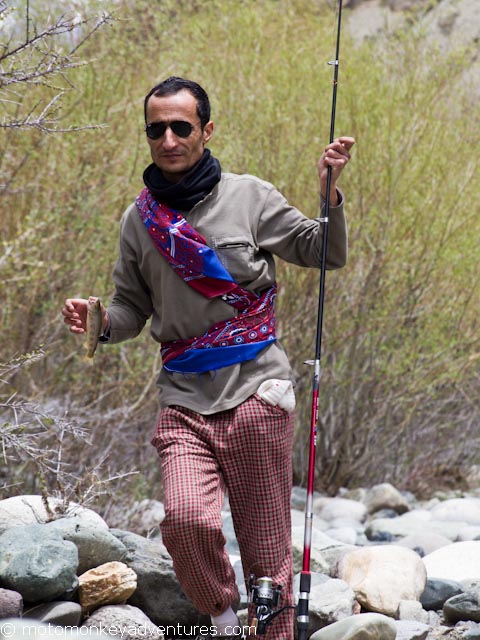 Yes, thats a trout in his hand! 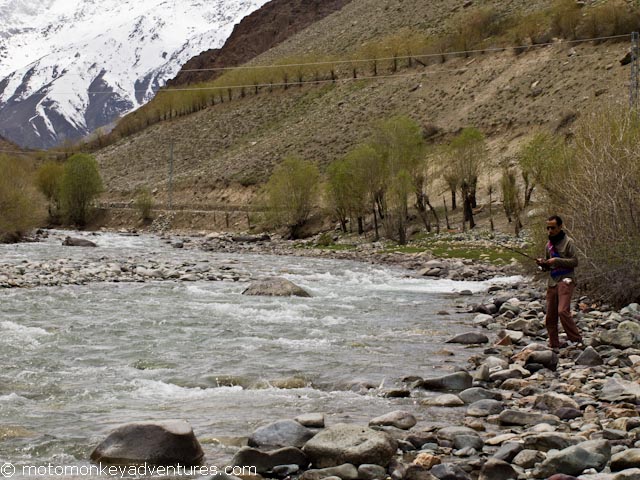 The river branched out and we made our way back to the jeep with only two tiny fish in my hands. There was no way we were going to feed everyone! Driving on we reached Lunga Valley and pulling into a designated picnic / camping site, we laid out our tents in a room that had been constructed. We had to remember it was still spring, despite the days being warm, the nights were still incredibly cold.   Hopefully having two bodies to a tent and inside will help keep us warm.

The three musketeers set off for round two of fishing, while Honey Man stayed behind to create the camp fire. Leaving Hungry Man to fish in his style, I literally chased Yasir down the river. Apparently the technique of ‘fish angling’ was to throw the line in, wind in, run up the stream a few meters and repeat the actions. Every few meters, Yasir would whistle out to me, as I looked up, I caught sight of a fish flying through the air towards my feet. I guess I now had a job, fish collector! 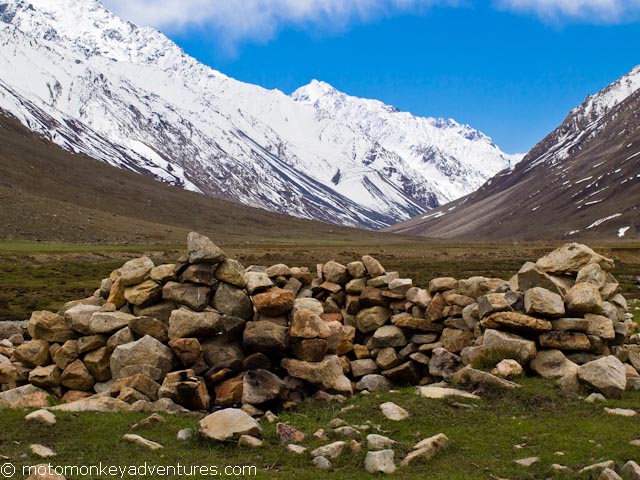 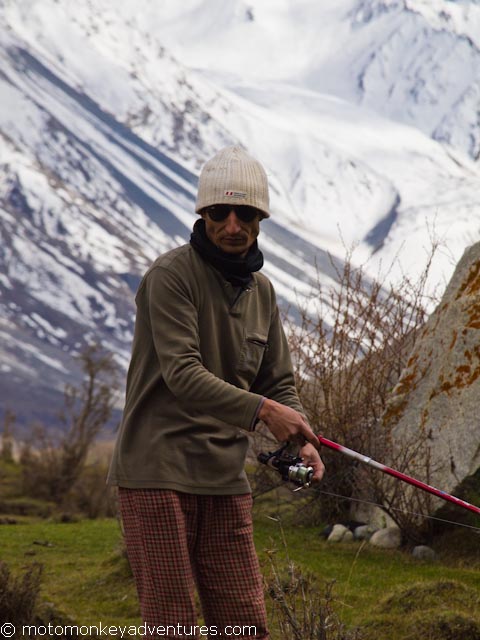 Yasir stood still for a second to snap this shot 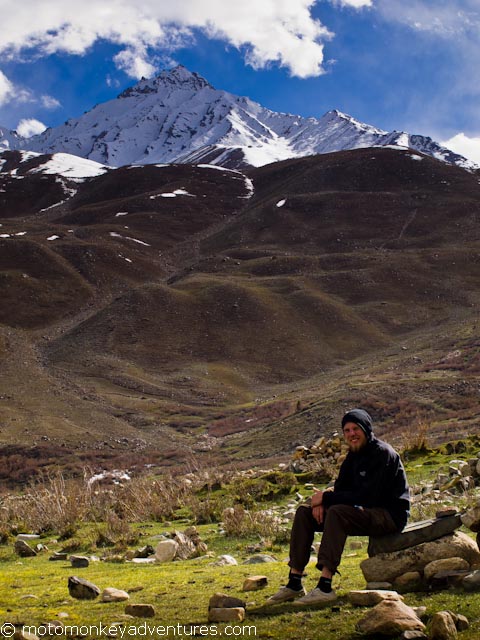 Sick of all the running Hungry Man sat down for a rest – then the fish police turned up! 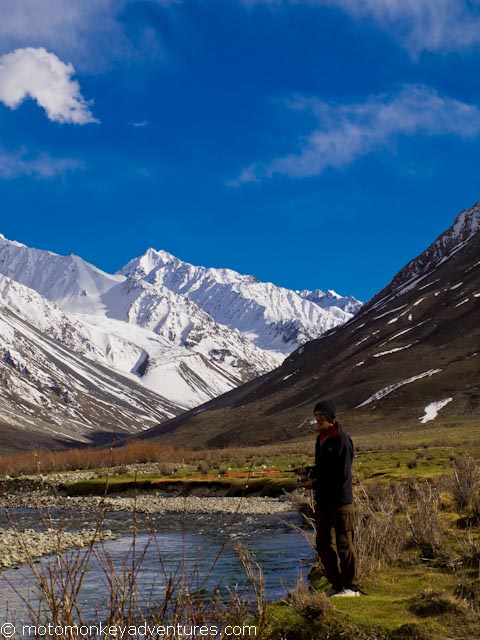 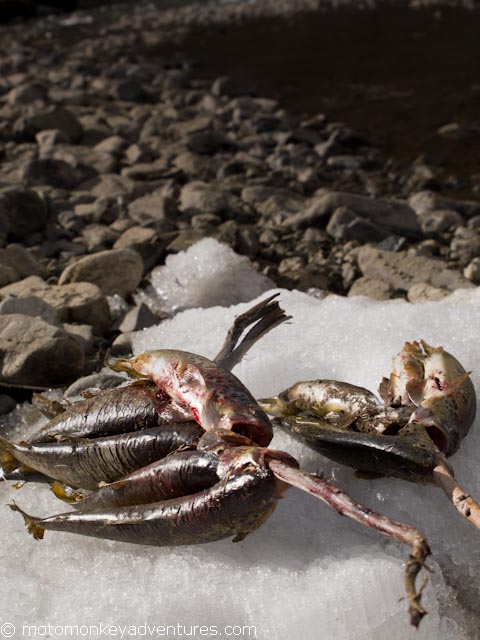 I found some ice to laid the trout on

As the sun dipped out of sight, the valley completely changed temperature. My numb fingers tried to keep a grasp on the stick, carrying 30 wet slimy fish. ‘Ok, I’ve had enough!’ Kicking up my heels I made a dash back to the waiting fire. But this wasn’t going to be the end of it. I had to help prepare the fish for cooking in the now nearly frozen river! 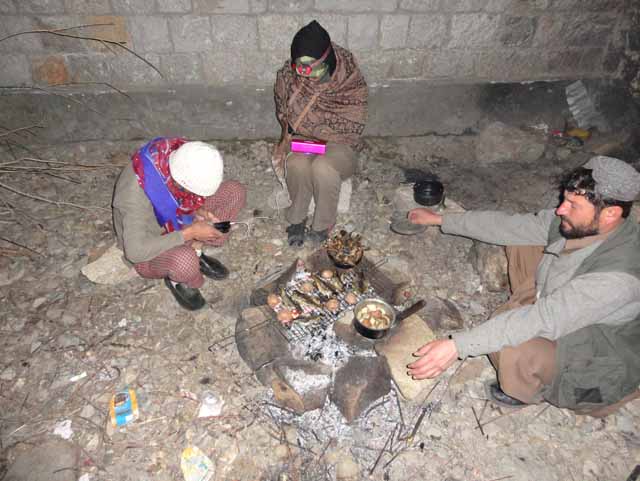 The truth of the situation Photo thanks to Joel 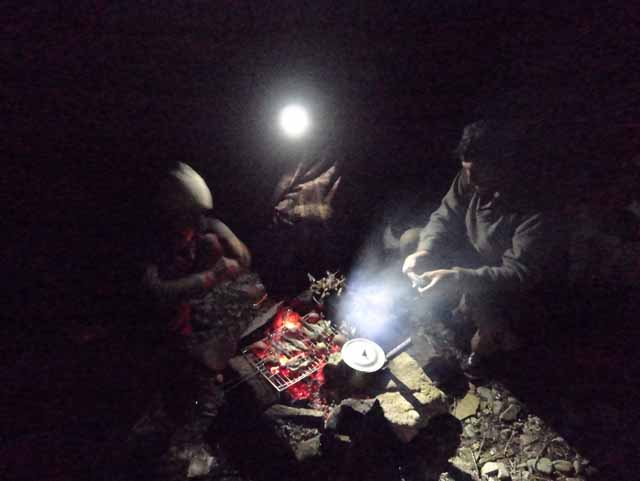 The romantic view Photo thanks to Joel

Later that evening we ate an amazing dinner of bbq fish and boiled potatoes, all cooked over the camp fire. Never in my life have I ever run while fishing, but I have to say it was well worth all the running!  Hungry Man was only able to contribute a couple of fish using the western stationary technique.

Before this trip, Honey Man had never slept in the same room with a female that wasn’t his mother, sister or wife. He was a bit taken back on our first night, when I was to sleep in the same room as three other men! Hungry Man and I decided to share my tent. Finally after warming up I fell asleep, but was woken when someone in the other tent un-zipped the door, after a few minutes would then zip it back up. Waking repetitively to this sound none of us got a good sleep. The next day Yasir explained it all.
Honey Man had never experienced a single woman wanting to share a tent with another single man. Normally this means we should have a declared relationship. He couldn’t get his head around two single people sleeping in a tent with no other thoughts than to sleep side by side. In fact I came to think and treat Hungry Man as a younger brother! Poor Honey Man, he spent the night consistently un-zipping his tent to check to make sure Hungry Man and I were not up to any mischief!
All of us were really just dreaming about fishing!