We had come so far from our little Gilgit village, seen a completely different culture within the same country, but we all have to get back to Gilgit for some reason or another. It was time to turn our 50’s Jeep around, retracing our dusty wheel tracks and follow our thoughts home. But not before we ditched our ‘Anti Terrorism Squad’ aka ‘The Horn Man’, off at the police station in Chitral, repeatedly refusing the offer of him accompanying us to the border between the two provinces. Only two days before had we travelled the same route and had no issues on our own, why would it suddenly start now? 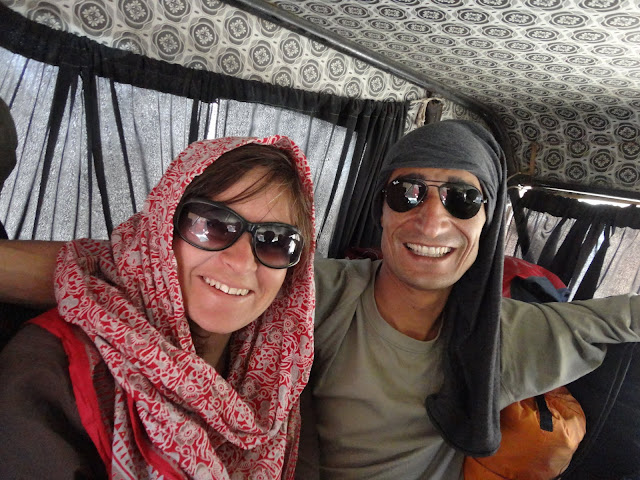 Yasir and I in the back of the 50’s jeep, trying to protect ourselves from all the dust! – photo thanks to Hungry Man

Leaving Chitral behind, we start making our way towards Shandur Pass, but it wasn’t long before the antique 50’s Jeep shudders and dies in the middle of the road. With a mischief grin on his face, Honey Man turns to us and say’s
‘I think we just ran out of petrol’.
‘What?   But we reminded you less than 50km back!’ we cried!
‘I know, I know but I must have miscalculated!’
Looking about us, there was nothing in sight but bare stony mountains and a hot paved road. Spotting a nice cool shady looking spot 2 kilometres back we leap out and attempt to push our yellow chariot back up the hill towards it. Fruitless thoughts, even a car load of people stopped to help us, but they too gave up and had a much better Idea. Despite their car already bursting at the seams, they managed to fit Honey Man in somewhere with his 20 L jerry can and they headed off towards a petrol station.

The sun bounced off the shiny silver rocks and the black paved road and aimed its heat rays directly into the Jeep, which was our only saviour from the direct sun. Yasir, in desperation, turned the key and it roared into life! We clapped with glee as we started driving in the direction that Honey Man had headed in.

A faint thought crept into my mind, I didn’t want to spoil the moment but this was serious. ‘Yasir, I think we should stop. If a Diesel engine runs out of fuel completely we will then have to bleed any air from all the hoses’.  Luckily for us, I said this right next to theshadowy haven we pined after only a few moments ago. It had everything a stranded person could desire, shade, water and a ton of places to sit outside. Now all we have to do is keep an eye out for Honey Man. 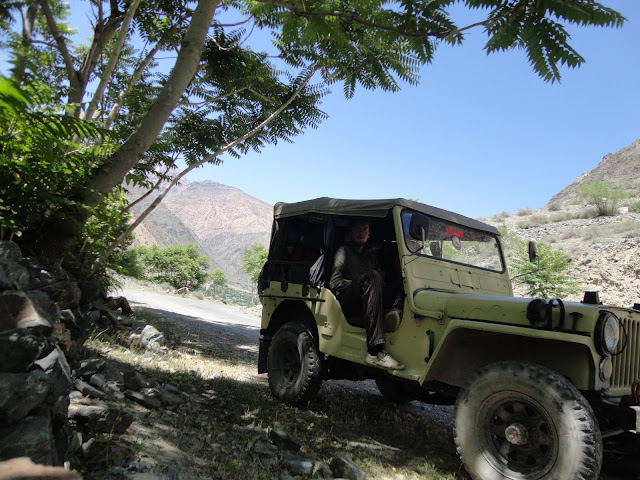 Our refuge in the shade – photo thanks to Hungry Man


We all went off to do our own things, Hungry Man and I both sat down, with music in our ears and caught up on our diaries. Yasir making notes for when he returns to the office in two days time.   I’m not sure how long we sat there, but it seemed like ages before we heard Yasir cry out. Leaping up I was just in time to see Honey Man disappear around the next bend clinging to the spare tire on the outside of a minivan. A few seconds later he reappears with a massive grin on his face carrying 20L of fuel. Hurray for us! 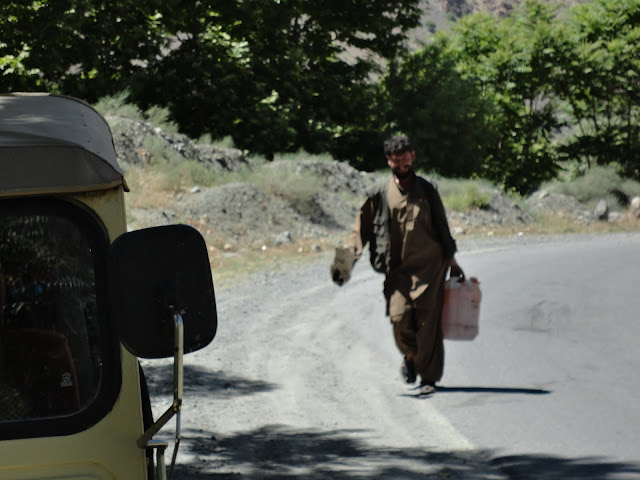 Honey Man with a huge grim on his return with fuel! – photo thanks to Hungry Man

Before crossing Shandur Pass, we all thought it wise to fill the jeep, stopping at a petrol station in the middle of nowhere. We all jump at the chance to stretch our cramped legs. Leaping out through the front passenger side, I noticed thick black oil pouring onto the ground. ‘Bus, bus, BUS’ (Stop, Stop, STOP) I yelled at Honey Man. Sensing my urgency he turns the jeep off and takes a look at the huge puddle of oil. Popping the bonnet, we find that the oil filter was completely full of rubbish and the oil was coming out an overflow value. I don’t know if that was entirely correct, but it’s not my vehicle so it wasn’t up to me. One would think you wouldn’t be able to find a oil filter to fit a 1950’s American Jeep in the middle of nowhere, but sure enough this lonesome petrol station has it all! 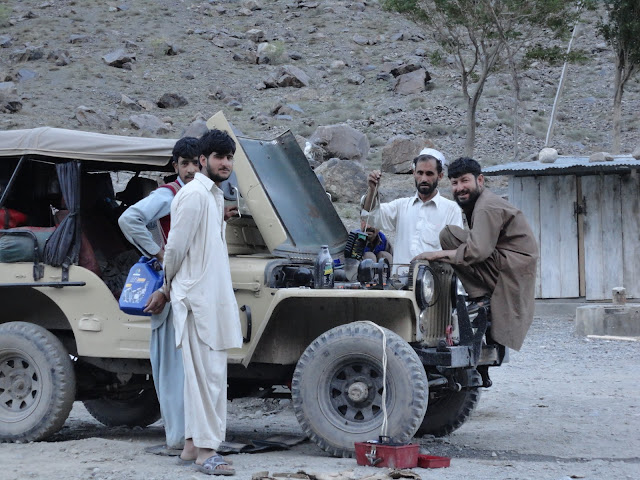 Fixing the oil filter – photo thanks to Hungry Man

We had been promised by the fishing police that there will be a feast of trout on our return to Teru in Lungar. But with all our mishaps throughout the day, we hadn’t got as far as we hoped. It was starting to get quite dark, and Honey Man didn’t want to push our bad luck while crossing the 4000 meter high Shandur Pass in the middle of the night.
In the next village he hunted out a friend so we could hopefully sleep in their guest room. He had no idea where they lived but after asking a few locals he quickly found the address. Honey Man disappears into the dark, only to return a few minutes later ‘It was someone with the same name but he wasn’t my friend!’ Laughing, we realised that could only happen in Pakistan!

We were all nervous, it was pitch black, we were climbing higher and higher towards Shandur Pass and the cold was creeping through our clothing as we sat in this side-less Jeep. The head lights made out a metal barrier and guards came out of their tiny cosy hut only half dressed.
‘You cannot pass here, you have to stay here the night’ . We looked at each other and around the jeep. There was absolutely nothing to sleep in or on except the in the jeep as their room wasn’t big enough for four more people. After much argument, we had to sign a waiver to state that we are responsible for our own safety. This made us a little edgy after all the bad luck we have been having today, but we carried on regardless.

Just as we reached the top of the pass, the huge round moon came out to greet us, and reflect into the completely still lakes. Despite the temptation to stop the jeep for a photograph, I realise we are all too cold and tired, it’s just best to carry on to Teru which is only another 20 kilometres.  A fox darts away from the approaching jeep. There is a strong belief  amongst the locals, if a fox is seen at night while travelling, your journey will be safe.

I don’t have much recollection of the next hour. I know from memory we would have crossed through another check point as we enter back into Gilgit-Balitstan province, and travel back down the other side of the pass to Lungar but I must have been so cold and so tired it all faded into nothing…only to come out of my dream state once we reached Teru.
Surprisingly at 2am in the morning, the fishing police were not waiting for us, with beautiful steaming hot fish. We banged and banged until finally someone answered the door and gave us some food. In a delirious state of consciousness,  I passed on the chai, and fell asleep as soon as I was horizontal. 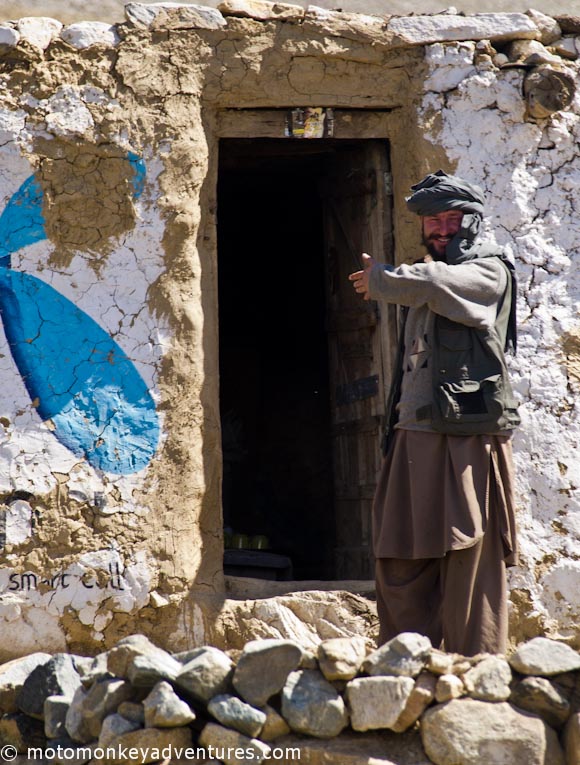 Honey Man inviting us in for a Chai – Shandur Pass 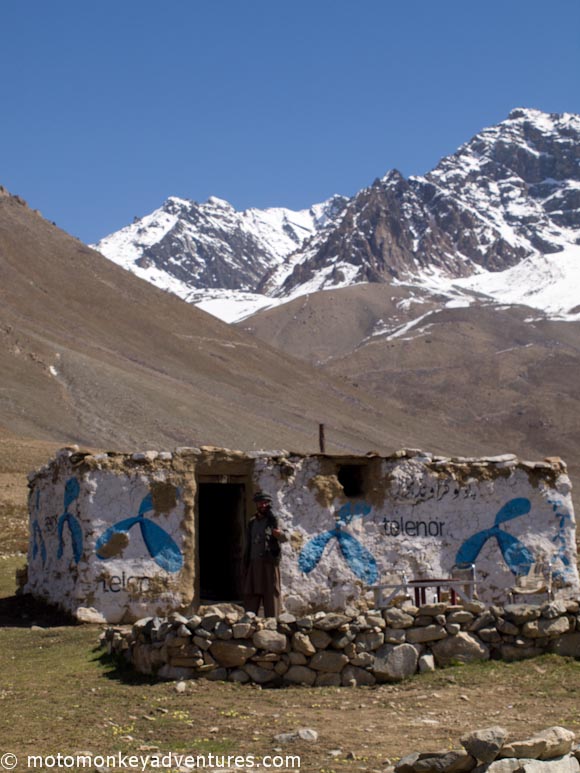 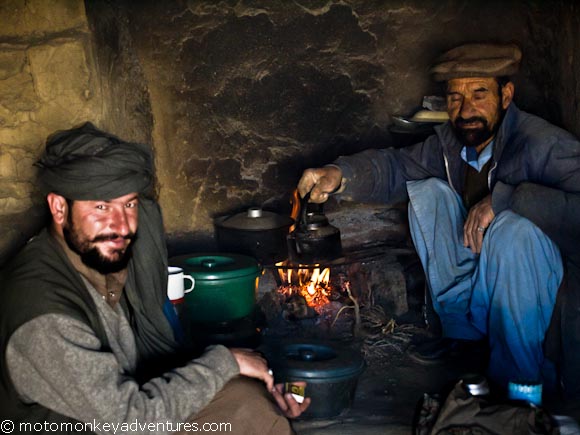 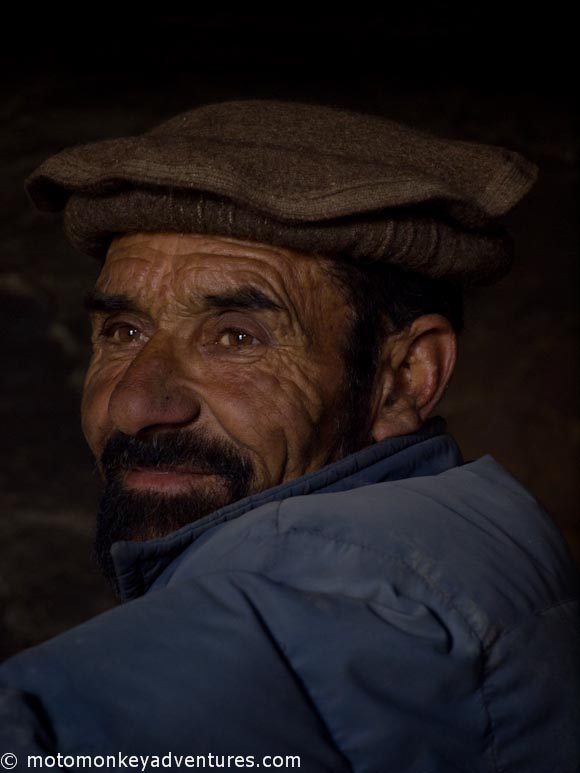 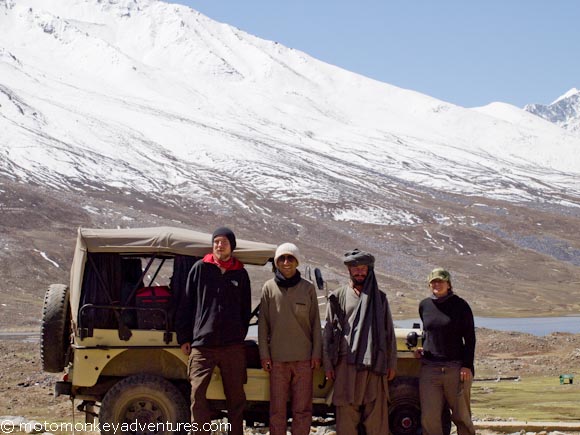 Waking to an empty room, I wondered where the boys slept that night? I went to sleep and didn’t even hear them take the bed out and settle into the next room! Peering through the window, they were still fast asleep. I gathered up my diary and Ipod and sat in the warm morning sun. It wasn’t long before I was joined by Yasir who arranged for water to be heated up for a bucket bath. 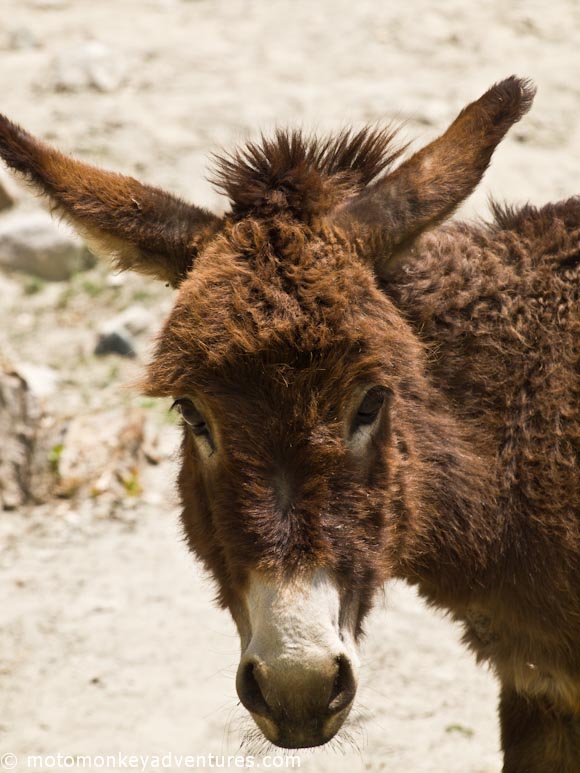 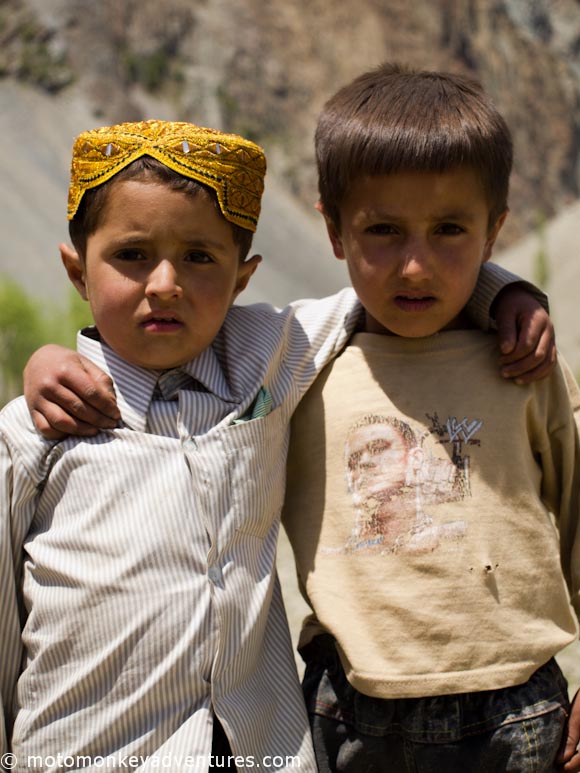 There is a saying, bad things come in threes. Yesterday, we ran out of fuel, our oil pump died but the third one never eventuated until this morning. The poor yellow jeep had a flat tire. I guess the fox belief is true as I think we would have all lost our patience if we had to stop at 2 am and change a tire in freezing cold temperatures!

Now that we were on the home stretch, with Gilgit only being a five hour drive away we decided to spend time fishing in Phandur Lake before calling this adventure over. But it wasn’t over for the little yellow jeep, as soon as Honey Man  dropped us off, all the wiring burnt out and the jeep was rendered finished!     I guess that was the real third bad thing…