I never know how it happened but we got lost leaving Gilgit. We stop to ask at the police check points which are positioned all over the city, but they didn’t have a clue, they are just paid to stand there and watch the time flow past. But as usual time was something we didn’t really have, we wanted to get to Chitral today, but we didn’t know the exact kilometres or time it was going to take us to cross the newly opened Shandur Pass.

Twisting through the narrow laneways framed by the two metre high concrete block walls that provide each house with their privacy, we eventually stumble across a paved road, the road we were meant to be on. A nice, wide paved road, but how does one find this road from the bazaar? This was a mystery that Michael and I would never know as we were now heading back to Islamabad.

For the first time since Sri Lanka I was wearing my AXO jacket over my amour jacket, I even welcomed the warm air hitting my face bringing the fresh smells to my nose and a smile slapped across my cheeks. The few days resting in Gilgit had done wonders to my stamina, I was ready for anything.  We rode higher and higher in to the Ghizer Valley, stopping occasionally to sign a tattered foreigner registration book, which always testsyour patience even so early in the day. The road turned from a beautiful paved road that hugged the cliff edge, with the angry, roaring river below trying hard to lick the wheels of your motorcycle clean, to a smooth un-paved road patterned with the long shadows of the birch trees that lined the road, smack bang in the middle of a broad, sweeping  valley.

I stared hard at the rough built stone houses, wondering who lives in these cold, harsh looking buildings. Timber rafters poke through the stone walls, giving you a glimpse of how the building was constructed under the piles of mud that formed the roofs. A smoking chimney softened the whole picture, and gave you an insight to how these people lived, otherwise I might have been mistaken and thought it was a barn.

We pass a cluster of houses and stores, and stop at a small guesthouse / store to ask about fuel. Michael turns his bike off to be heard more clearly. They point further up the road, we are obviously not at Teru yet. Michael goes to turn his bike on, it doesn’t start. He tries and tries again, thinking it’s not out of gear, therefore it won’t start. He gives up rocking his bike backwards and forwards trying to find neutral, and he asks the concerned locals to give him a push.
Michael was already slightly grumpy, as I don’t think he really wanted to go back to Islamabad this way, now his grumpiness was apparent and he had good reason to be worried. I on the other hand saw no problem in a bike that wouldn’t start straight off on the electric start. All throughout Russia, I had to entice someone to push my bike on my last motorcycle trip. In Sri Lanka, my friend’s bikes consistently broke down and needed to be pushed. We are now in a place full of mountains and hills, one cannot be worried about a rolling start!

Michael pushes on towards Teru with me in tow, as fallback if his bike suddenly stops. Teru is the last town with accommodation before Shandur, a mile stone we had discussed before leaving Gilgit where we would take note of the time and decide wether or not to cross Shandur that day.

A few meters before Teru, I watched a completely unbelievable incident unfold before me.  I was travelling close on Michaels tail due to the lack of speed he was travelling at. As we swept around a wide, open corner on the left hand side of the road, two locals on a red CB125 started tracking towards Michael. Michael, clearly seeing them too, started to slow down further and moved closer to the left hand bank that formed the edge of the road. The locals carried on their path heading straight for Michael. Michael responded by half riding up the bank, but that’s exactly when they hit. We were travelling so slowly, that despite how close I was following I had enough time to stop behind him.

They hit Michael’s bike in the front forks, pushing him over into the bank. Angry, Michael leaps off the bike and starts yelling, ‘why the fuck did you not see me? I’m on the left hand side of the road! Look what you did’ pointing to the leaking radiator water. Removing the saddle and tank bags we lifted the bike up to see the damage. ‘Sorry, sorry, sorry, I thought you were going on the right hand side of me’  ‘Why would you think that when we are both on the left hand side of the road?’ Michael booms at them.

A man from the village is trying to help translate for us, he is explaining that he honestly thought we were going to go on the right hand side and he is really sorry. I looked hard at the guys, realising that they must be either really drunk or completely stoned, but anyway, Michael is telling me everything is ok with his bike, no broken bones or anything so who cares, it was a small, slow pace impact!

After fuelling my motorcycle we leave Teru with a bad taste in our mouths. On the out skirts of the town, we once again had to fill in the police register, but this time instead of getting impatient we got to watch the people stream past with their donkeys fully loaded with wood, household goods and even one baby was strapped to the rocking back of a donkey. By the time they all passed we were free to carry on.

Following Michael was starting to become annoying. He was travelling really slowly, on one hand I can understand he is been really cautious but I was just too excited by the landscape unfolding around me. For the first time since Mongolia, I see Yaks running freely over the tuffs of deep green grass with the steep screed snowcapped mountains as a backdrop. The only sign we were constantly climbing was the level of snow getting lower and lower until patches met the road. This was Lunga, a dot of the map but anamazing sight to my eyes. I was so excited I just wanted to race up the pass to see what was on the other side, instead of sitting behind an old man stuck in his electric wheel chair. But I’m patient I can wait a few moments more. Then I just didn’t realise how long that moment will be… 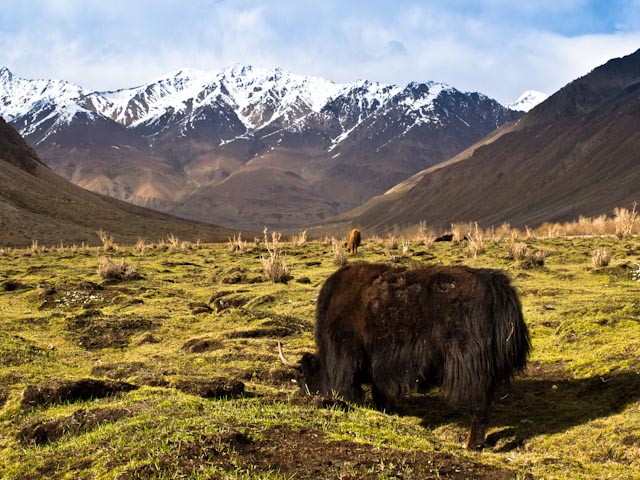 Struggling to maintain first gear speed behind Michael, I wondered why the hell was he travelling this slowly? Suddenly he stops his bike and turns it off. Pulling up beside him, he tells that his bike isn’t working well at this high altitude, I couldn’t believe it, we hadn’t even reached the top and probably sitting at 3500m above sea level my bike was behaving fine despite the slow speed, why should his bike have a problem. Just like he was using that as an excuse he then dropped another bomb shell, his bike is overheating, and his fan isn’t kicking in. We pull off his saddle bags fairings to discover that when the bike had dropped it must have dropped onto a large stone and dented the fan’s protection bar, which now stops the fan from turning. Suspecting the worst, Michael claims the motor has burnt out in the fan and he needs to replace it before he can carry on to Islamabad. I just stare at him unbelievingly. First a small, slow speed crash caused this?? Then why didn’t he see the damage when he checked his bike over?? Why is he suddenly jumping to conclusions that the motor is broken?? On top of it all his shoulder and hand is starting to hurt. It could all be true, but I just got the feeling he was avoiding riding this direction. Thoughts flowed through my head, as I knew what the next question was going to be, should we turn around? 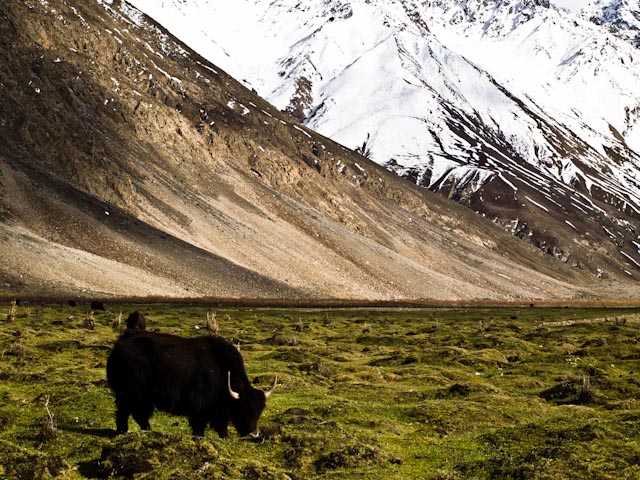 I’ve liked Yaks ever since Mongolia.

With the new sights and sounds around me, all I wanted to do was carry on towards Chitral. But I remember being in Russia, after waiting patiently for someone to have their van fixed only to have them ditch me a week later when something was clearly wrong with my bike. I had to stick to Michael no matter what, and I know what I would have wanted him to do if the roles were reversed.

At 2pm, with no lunch in our bellies we turning the motorcycles around and Michael take’s off at lightning speed down the mountain, almost confirming my initial thoughts about him not wanting to go this way back to Islamabad.  Re-tracing our path, back through the broad valley with the birch tree shadows no longer slashing across the road, through the narrow gorge with the roaring river below, back towards Gilgit, a town with a great guest house, with people we know and can help Michael.  We travelled all this but not without my own problem.

Not far from Gupis, just after the paved road starts, I got a flat tire. Riding the one last kilometre to the village before Gupis, I found a tire repair shop. It’s now after 5pm, this will take close to an hour before we are back on the road and then dusk will fall. With no way around it we were doomed to ride in the dark once again! This time, the flat tire wasn’t caused by a puncture, for some reason the last patch had burst – great, now I am going to have to find a new tube.

With less than 10 kilometres to go until we arrive into Gilgit, I was debating wether or not I had enough fuel to get me home. Knowing full well Michael hadn’t put any fuel in since we left Gilgit and I had only put in just enough to cross the pass, we were both playing a dangerous game of when we had to start pushing the bikes home. That’s when I see Michael pull into a service station – thank god for that!

I felt as if I was in a bad dream, my ears were ringing, my legs wobbly, I had long run out of water in my water bladder and we hadn’t eaten since 9am in a small town called Gakuch. My concentration was gone, I no longer felt excited. I pulled up outside a street cafe and ordered a vegetable dish for both of us and sat down miserably eating the tasty food. I called Qayum, to pre-warn him we were going to arrive at his house shortly, I would have called sooner but we had no phone reception.
Wearily I ride through the opens gates of Qayums house, within a few minutes I crash into my old bed and fall asleep, leaving everything on my bike to deal with tomorrow.  During the night, Michael called his mechanic friend in Germany, starting and stopping the bike, waking everyone up while doing so. Even if he gets his bike fixed during the night, there was no way I’m leaving the following day, I’m now broken!

Note:
Sorry for the lack of photo’s but after this my computer died and I lost this section of my photographs… IF i manage to recover them I will up date this blog.