With my Carnet De Passage stuffed in front of my speedometer, my helmet hung around one of my mirrors, I rode through the green and white gates into Pakistan.

I felt instant relief as I leave behind my problems in India, this is a new country and I think I will have a fresh attitude. I’m only a meter past the gates and already I feel the change within myself and am enjoying the attention I was getting from each border guard I had to stop and talk to. Each one asking first for my passport and carnet de passage (international document to allow temporary importation of a motorcycle without paying import tax), then the questions came, ‘Why do you come to Pakistan alone?’, ‘What did you think on India?’, ‘Are you married?’, ‘Are you Christian?’, I answered all their questions with good humour before moving onto the next.

After being pointed in the right direction, I parked my motorcycle right outside the oversized building. ‘Quick, quick’ a man said, dressed in a white shirt that came down to his knees with baggy white pants poking out from underneath. To me his outfit looked a bit like a pyjama set, but I wasn’t going to say anything. I rushed inside not knowing what the fuss was about. The immigration man scanned and stamped my passport and then pointed me in the direction of the customs man then left his counter. Looking around the vast complex, I wonder why they have so much space, and standing in the middle was three large baggage scanners, again they never use these machines on me, so why have them at all? I showed the new customs officer how to fill out my carnet and then I am free to go on to Lahore, but I couldn’t help myself but ask where everyone had disappeared to. The customs officer explained that a special Muslim prayer had just begun. I had completely forgotten that Muslims pray 5 times a day. 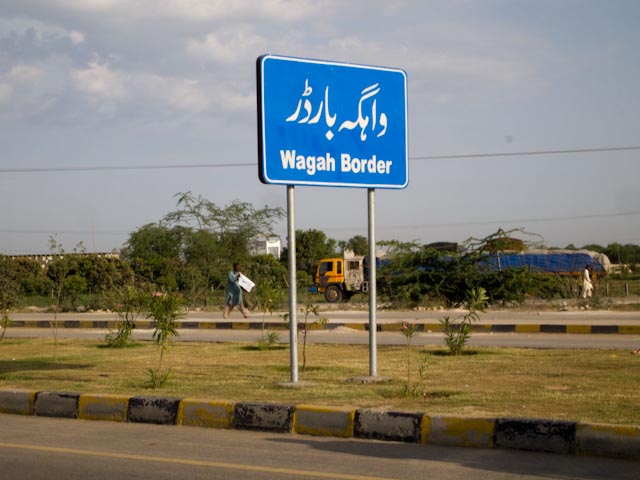 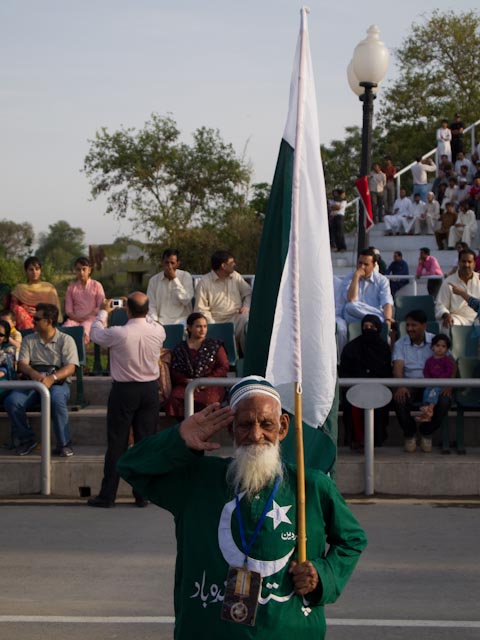 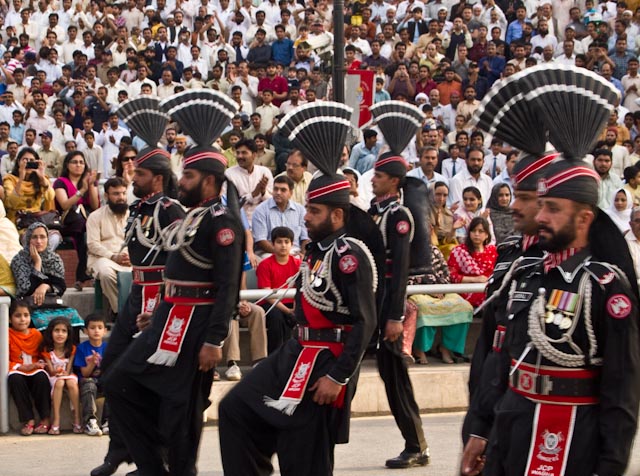 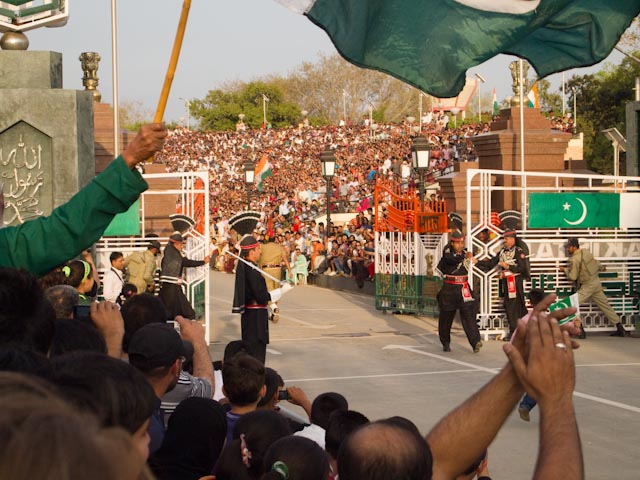 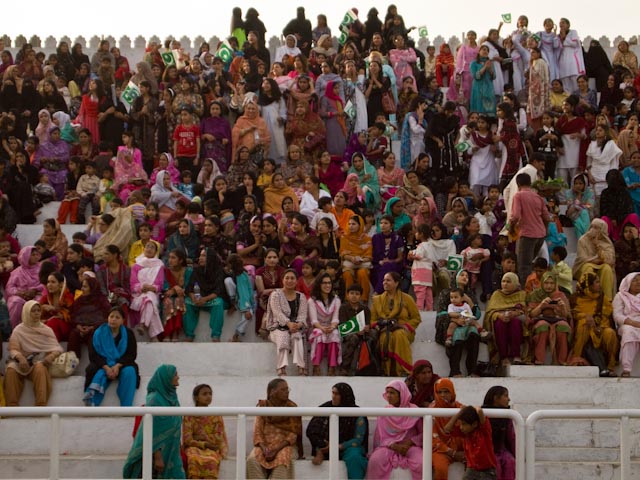 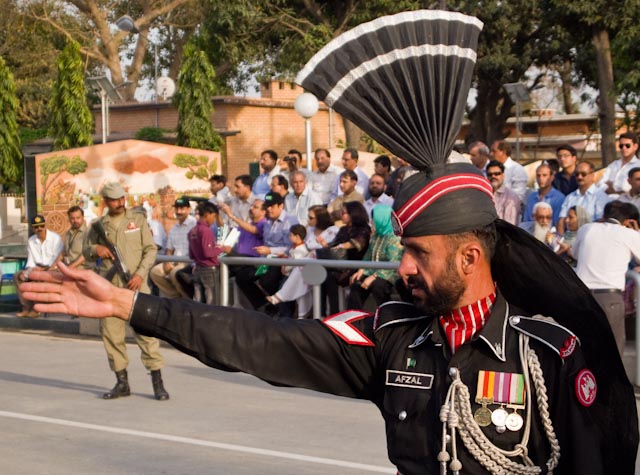 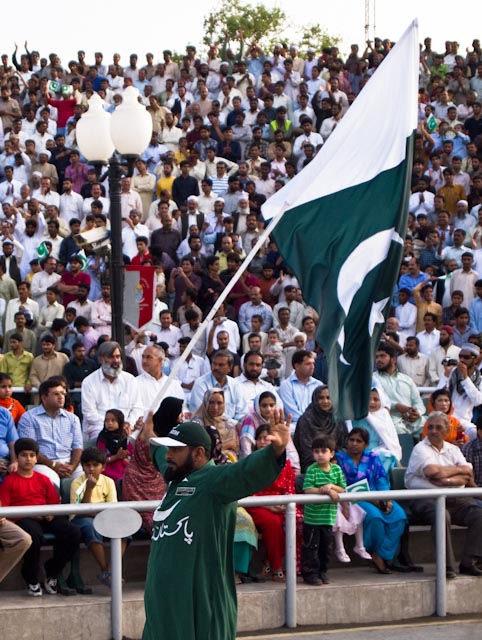 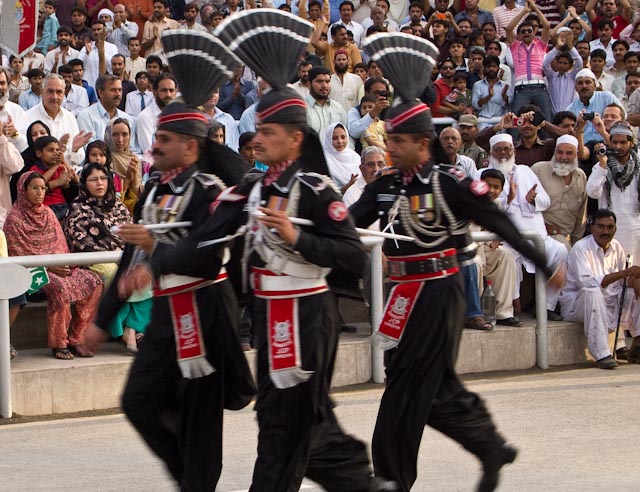 Trying to find a guest house that was recommended to me in the centre of Lahore wasn’t going to be easy. I had no official map, only one I had roughly sketched out. It meant I had to follow it exactly as I had not allowed any room for error which wasn’t exactly what I did. I rode along the ‘Grand Trunk Road’ for ages before I realised I had past several notable features and had to turn around and start again on my second attempt on entering Lahore. Once I was on the right road I found myself parked outside my guest house in no time at all.

I quickly change into non-motorcycle clothes to before heading out to look at the city but that’s when Malik (the guest house owner) saw me and said ‘You better have a look through my bags of ‘***’ (traditional women’s clothing) and choose out one you like. You cannot go around in western clothes on your own’. I look down at my baggy pants and my loose fitting three quarter sleeve top, I brought specially for Pakistan and wonder what I was install for.

Long before I arrived into Pakistan, I was told many times by other male overlanders, that I would have to cover my hair at all times. I brought two  scarf’s of different sizes in India and tried practising wrapping it around my head many times in the mirror, but I really had no idea how to do it correctly. I also spent countless hours worrying about the transition between taking my helmet off and putting on my shawl. All this worry was pointless for in Pakistan it didn’t matter that much however in Iran this would be a different story.

Eyeing up the woman next to me as we cross the busy road, I noticed the pants, top and shawl all matched perfectly. Manicured toes and dainty sparky wedged thongs emerged from below the billowing pants. As she raised her hand to her shawl to do the occasional adjustment I got a glimpse of her long row of bangles sitting perfectly in an arranged pattern with, of course, the matching handbag.

Standing next to her, I felt like I was a bad example of a tourist trying hard to fit in but ultimately looking like a shambles.  I stood there in a long tan coloured tunic with pants 20 times too big for me but drawn up around my waist with a piece of string. The edges of my tunic and pants were trimmed with a patterned ribbon. I had a small grey and red block printed scarf tied loosely on my head, which kept on slipping down every few minutes because it wasn’t big enough to tie like a shawl. To complete my image I had on a pair of Australian $20 ‘Vollies’ with well developed air vents and my handbag was an ex New Zealand medical army bag. I felt pretty uncomfortable in this sack of an outfit, but at least I sort of blended in. 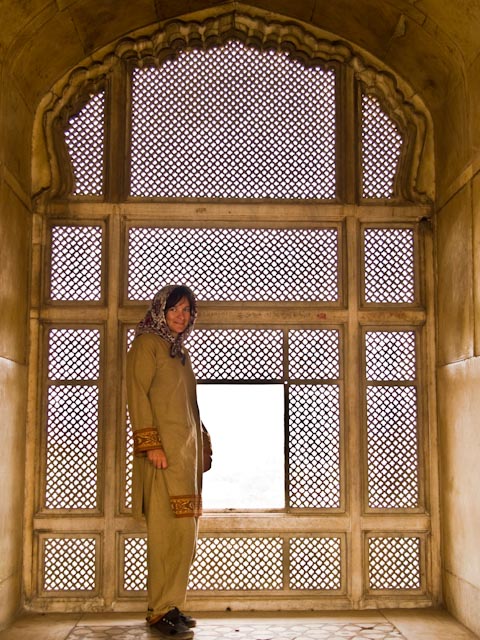 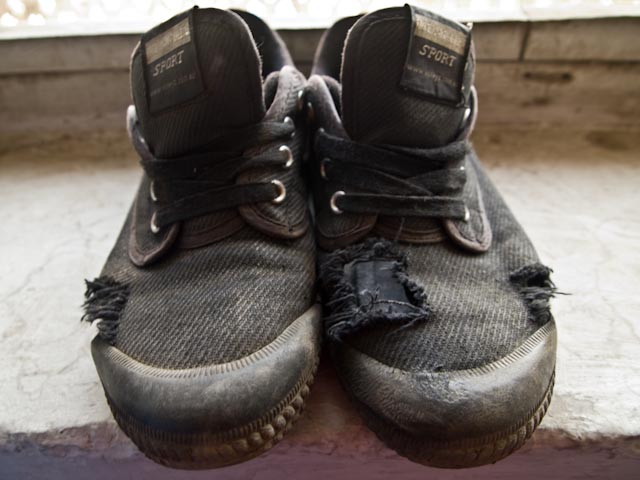 >Despite feeling self concious about what I was wearing and how I should wear it, I carried on like normal and spent a couple of days visiting the sights of Lahore with a fellow traveller from the guest house. He even twisted my arm to see the Wagah border closing ceremony on the Pakistan side, where  I was mistaken for a local and ushered into the local stands before my male companion rescued me and guided me through the boarder guards to the VIP / foreigners seating area.
It didn’t take me long to work out you didn’t have to wear the shawl / scarf over your head. It was only necessary to wear when entering a Mosque or if you were feeling particularly uncomfortable in the streets. However, I have to remember this could change depending on where I am within Pakistan. 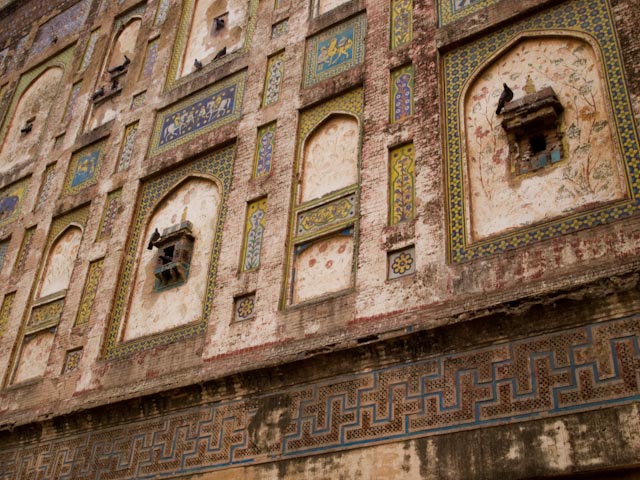 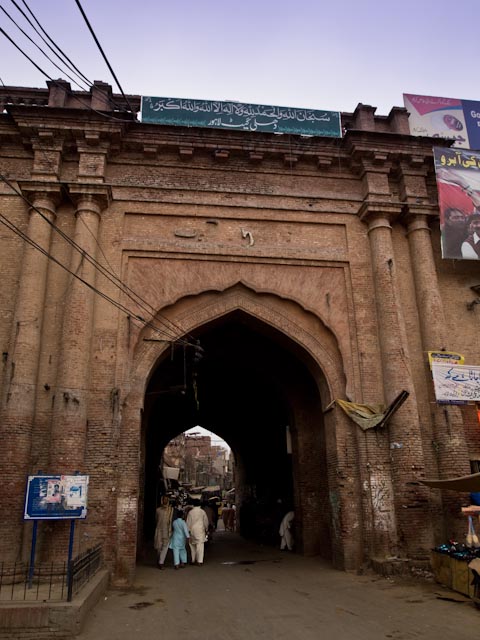 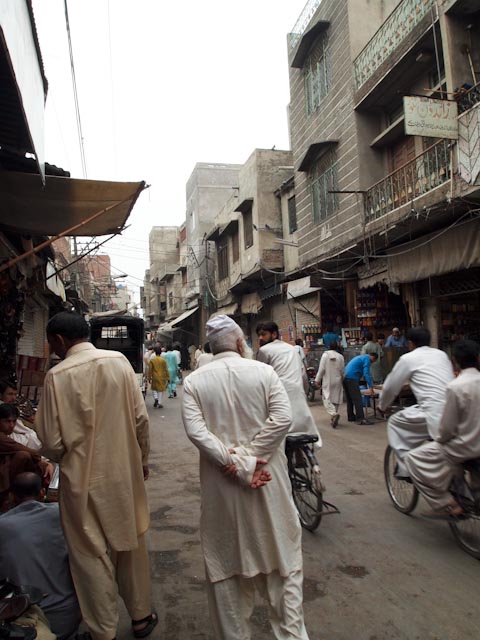 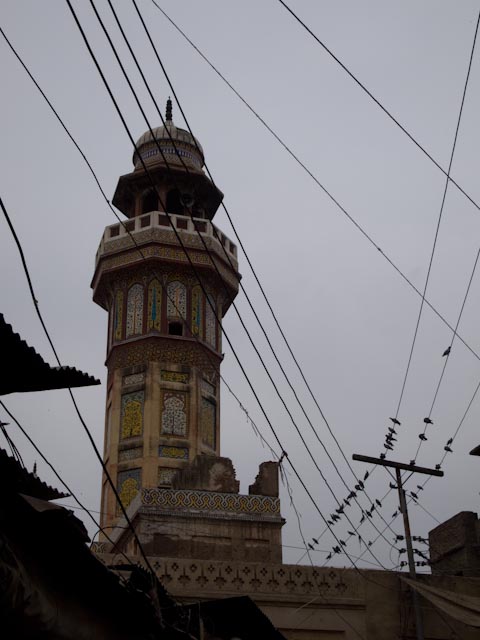 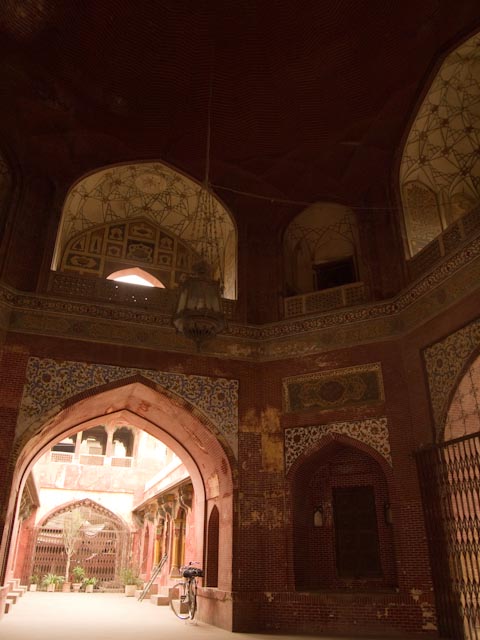 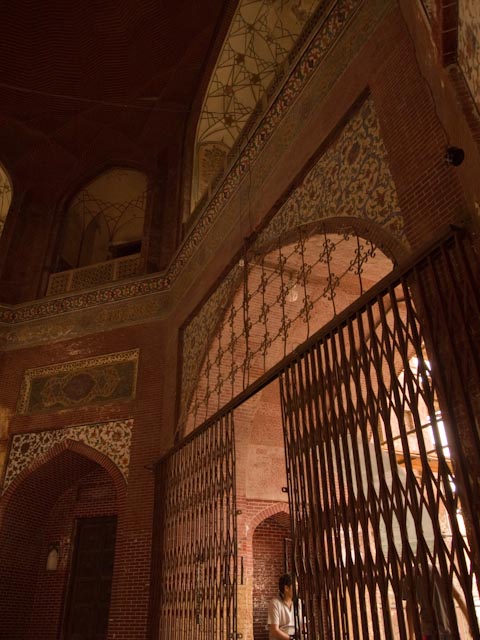 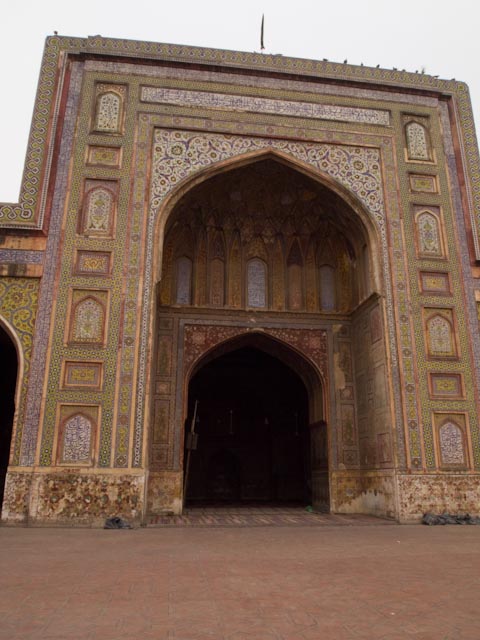 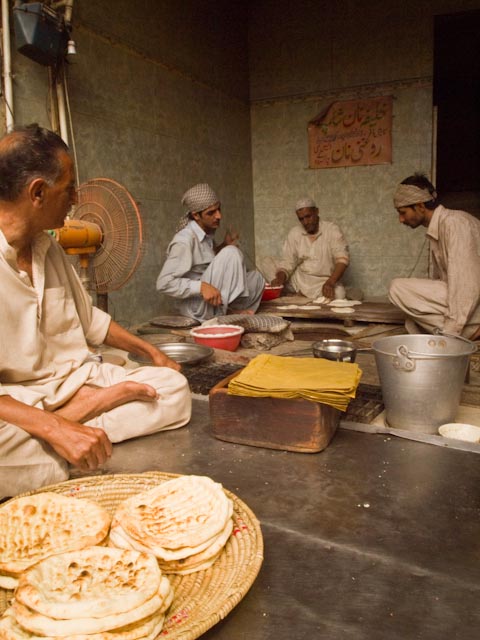 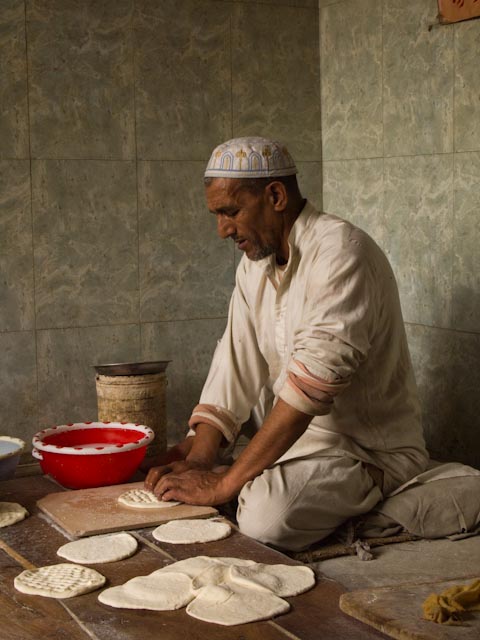 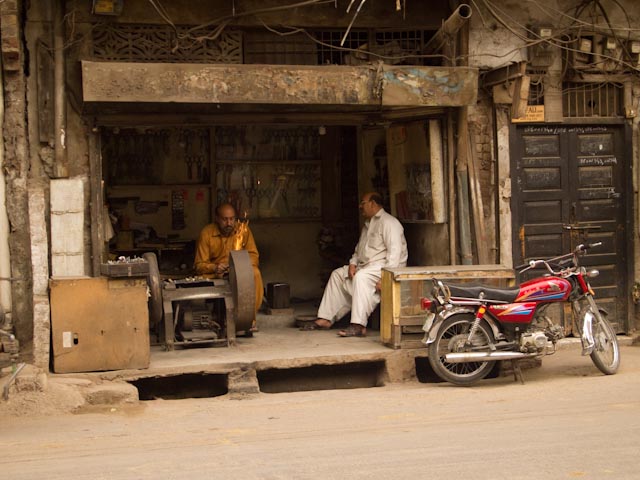 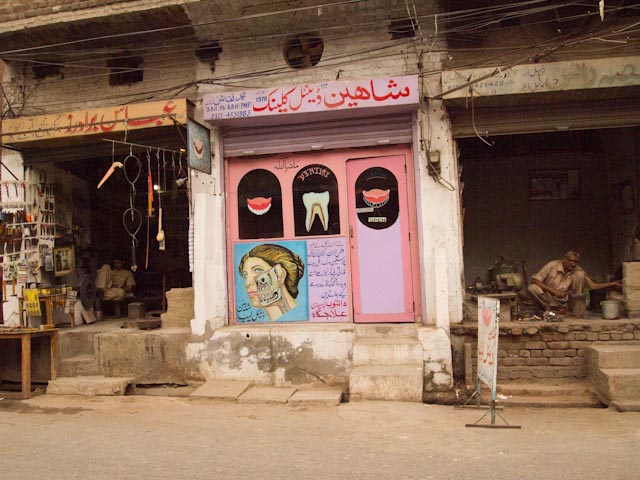 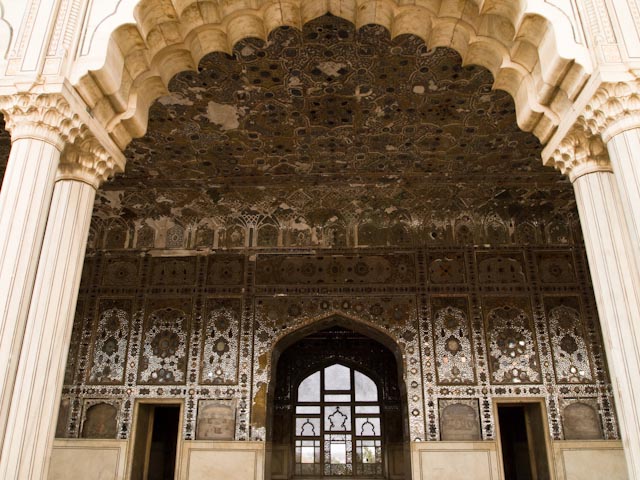 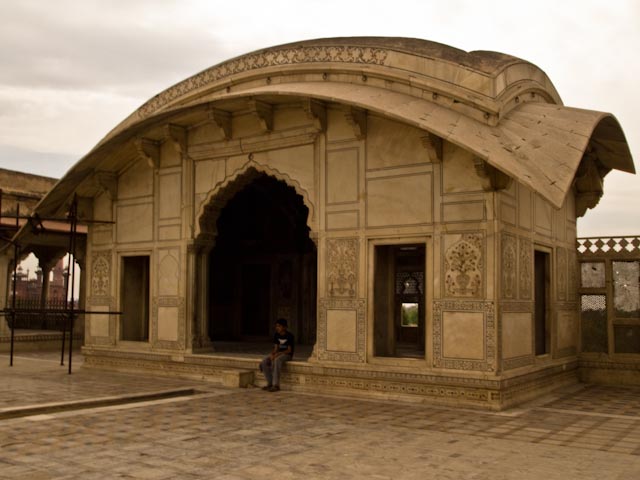 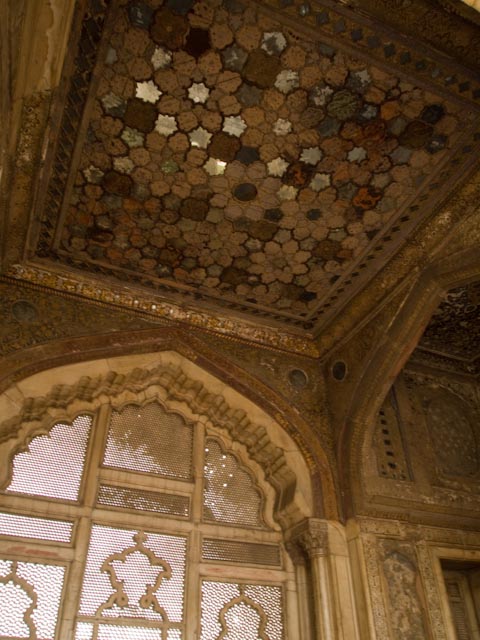