Every year you have a birthday, like every other year mine came along on the same day. Birthdays are something I like to go past with out a fuss, not because I have issues with coming to terms with being a year older but because, I personally do not like the forced attention it brings you. I was quite happy to follow suit once again. However, under some pressure from my close friends, I organised drinks at a tapa bar located in South Bank.

I have never been one for receiving gifts. I am incredibly fussy and I dislike it when people’s response to an invite to a birthday party, is to automatically proceed to purchase a gift with no meaning or thought to it. When given such a present, I never know how to receive it or how to give the appropriate response back. Therefore, I have completely given up on the idea of giving and receiving.

As we all sat down together, Mel handed me a white envelope, which contained several folded pieces of paper. Pulling it out and unfolding them, they opened out to a cartoon called ‘After a Year of Cushions…’ and return tickets to Sydney. 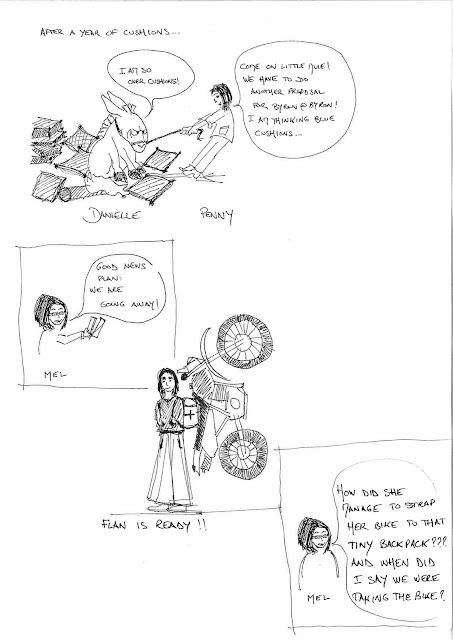 Mels cartoon – After a year of cushions

Earlier in the year, I had to get tough and explained to all my friends who are widely scattered around New Zealand and Australia that I couldn’t visit anyone as I was putting all my money towards my trip.

Therefore, Mel thought she would allow me that pleasure, before I leave Australia to see my friends in Sydney.
With one week until Mel and I get on that plane, I emailed Steve from Adventuremoto.com. I had meet Steve at the Horizons Unlimited meeting in Noosa. Steve and Lance (from Trailzone Magazine) had driven all the way up the coast to have a trade display of all their products.

After the Horizons Unlimited meeting, I approached Steve, asking him for his support in my adventure. At first, I was a bit shy about asking him, since he was a person I knew. I was blown away when the reply came back with ‘of course, but maybe you should change your name to cheekymonkey’. An old friend, who I hadn’t seen since my first trip to Laos, picked us up from the airport. We narrowly escaped our death on the way to Steve’s warehouse. Getting lost was also part of the fun! I saw more of Sydney then I had ever seen before. Blair hadn’t changed a bit over the years!
Arriving at our destination in one piece, we stood outside the large green shed. With a quick glimpse, I could see it was full of bikes, tires, shelves packed full of the different products. Steve greeted me with a huge warm hug and a kiss on the cheek. After making the introductions to Mel and Blair, he dragged me inside.

Pulling a pannier frame out of a box and placing it onto the bench, he shows me how the ‘Wolfman’ panniers system clips simply onto the pannier. Just to show me the bags capabilities, he adjusting the straps to get the perfect fit. Trying to twist the panniers off the rack, I gave up when I could not find any movement. It was then I made my mind up. My previous panniers had only one horizontal adjustment. Every morning I would attach it to my pannier frame perfectly only to find it slips a few hours latter and then the panniers would then move. Every time I it a bump they would fly upwards like a pair of wings on the back of my motorcycle. Over time, the panniers started to rip and I then had a weekly pain-staking task of sowing them up.

Steve moved around the warehouse filling up a huge cardboard box full of tank bags, panniers, duffle bag, tool roll, toolbox, medical dog tags, fuel bladder, drink bottle holders, a tee shirt, and a hat. I couldn’t help wondering how I was going to get all of this stuff back to Brisbane in my carry on luggage! A Duffle bag to match the DR!

I carrying the ‘Wolfman’ duffle bag stuffed full, into the domestic airport. I was trying to stand up straight and make it seam weightless and small. All so, I didn’t have to pay for extra luggage. Mel wasn’t helping, she keep glancing at me sideways and telling me to stand straighten up, while laughing. Whats in the goodies bag??

Slipping past the airhostess checking tickets a luggage, I was on the plane with my overloaded bag. Plonking my self down into my allocated seat, I hand Mel the duffle bag to put into the overhead compartment. As the weight transferred completely into her hands, she almost drops it! Sitting back into the seat, I couldn’t help smiling. I was lucky and was able to have an awesome birthday. I was able to spend time with many of my friends spread over two cities. I got to spend some time with Steve from ‘Adventuremoto’, and get fully equipped with the gear I need for my trip. I hope that I can return the favour by help him out with his next project. me and my bike showing off my new teeshirt.
Mel, you’re amazing, thank you so much for making the Sydney weekend possible.